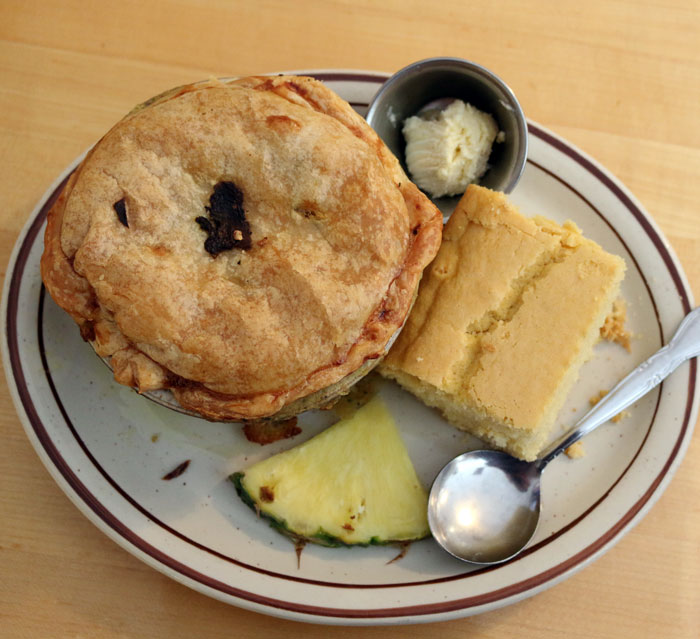 If you want to know the best places to eat in any part of any town, don’t buy a tourist guide. Don’t even consult Yelp or the local restaurant critic (even if it is a blogger gastronome). Your best bet is to ask a policeman because “everybody knows that cops always know the best places to eat.” That’s the advice of Chris Cognac, a police detective for a South Bay police department in Los Angeles. Walking his beat gave him the opportunity to investigate off-the-beaten path and hole-in-the-wall restaurants that usually only locals know about–the real local gems.

Aside from being a police detective, Cognac was an “informant” for the Daily Breeze newspaper in Los Angeles. He was the Daily Breeze restaurant critic, authoring a column entitled The Culinary Detective. In 2006, Cognac began parlaying his culinary detective skills in a Food Network program appropriately entitled “The Hungry Detective.” In half-hour episodes, he expanded his jurisdiction to cities across America in his mission to uncover the best hidden gems in each city.  The Hungry Detective was short-lived, but very much appreciated by adventurous diners.

About a decade ago, I came to believe Cognac that cops always know the best places to eat. That’s because I had an informant of my own–John Skinner, a tactical flight officer for the Albuquerque police department’s Air Support Unit from 1980 to 2016. Officer Skinner tipped me off to several wonderful restaurants, many offering meals at a steal of a price.  In April, 2008, he recommended Christy Mae’s Restaurant, “a relaxing dining establishment popular with officers assigned to the Southeast Area Command (precinct).” Officer Skinner called it “one of Albuquerque’s gems.” My inaugural visit confirmed that once again, my informant had given me a solid lead that promised to solve my hunger during every visit.

Having watched hundreds of cop shows on television, many of us might have these stereotyped ideas that police officers eat only at greasy spoons, donut shops and take-out hot dog joints in the worse parts of town. Christy Mae’s is the complete opposite of that stereotype. For one thing, there are no macho affectations on display. If anything, the walls are adorned with the nurturing and comfortable symbols of home. Come to think about it, this is exactly the time of place you might expect a policeman after hours of patrolling the concrete jungles in Albuquerque’s war zones.

Christy Mae’s walls are adorned with vintage bric-a-brac, much of it kitchen thematic. Hung on the wall directly over the cash register are muffin and cake pans of all sizes. Other antique kitchen appliances such as hand-turned egg beaters have similar places of honor. On a small area near the entrance hang several aged washboards. Ceramic ducks share space with a time-worn plow on a window ledge. One wall is dedicated to vintage signage from back in the days when Madison Avenue advertisers were much more clever and Hostess cupcakes were available at the unbelievable price of two for ten cents.

On the restaurant’s north-facing wall is a mural depicting the Tricario family which has owned the restaurant since 1985. Joe Tricarico, a retired New York police officer of twenty years, is flanked by his family, all but grandpa who are smiling.  Study the portrait a while and you might find yourself asking to what denomination the priest holding the chalice belongs.  In actuality, that “priest” is brother Andrew dressed in a smoking jacket representative of his earlier fraternity days.  The Tricario family  purchased Christy Mae’s Restaurant from the Christy Family in June, 1985.

Family portrait aside, the first thing you might notice when walking into Christy Mae’s for the first time is the intoxicating aroma of a very strong spiced cinnamon orange tea. You can have it with your meal then buy it by the gallon on the way out. If you like cinnamon, you’ll love this tea!  For me, the tinkling of metal spoon on a ceramic coffee mug is like the stimulus which elicited anticipatory salivation from Pavlov’s dogs.  Even before the aroma of steaming coffee reaches my nostrils, there’s no doubt as to what I’ll be having.  My friend Bruce “Sr. Plata” Silver is of a similar bent.

During our inaugural visit to Christy Mae’s, it was comforting to see two of Albuquerque’s finest among the dozen or so people ahead of us in waiting to be seated. We thanked them for their service to the community (as all citizens should).  Watching my Kim honor both policemen and military member has always brought to my mind Norman Rockwell’s immortal 1958 print “The Runaway.”  That print, if you’re not familiar with it, depicts a young runaway sitting on a stool next to a burly policeman in an old-fashioned lunch counter. The police officer and a short-order cook are conversing smilingly with the little boy, undoubtedly making the little boy at ease.

The Tricarico family prides itself in providing consistent food quality, good value and friendly service in a clean and comfortable atmosphere. As you’ll read on the menu, the Tricaricos believe in healthy sized portions and using only the finest ingredients available. They prepare their fresh soups, stews and chicken pot pies from scratch daily. These ideals are the foundation of Christy Mae’s success.  Christy Mae’s no longer serves breakfast but offers lunch and dinner every day but Sunday. The menu is predominantly American comfort food interspersed with some New Mexican favorites such as green chile cheeseburgers and Wak-a-Mole-ee, a  platter of chips under tons of melted cheese topped with Christy’s own guacamole.

Comfort foods are featured fare for dinner and as you might expect, that includes bounteous plates of country fried steak, ground sirloin, country ham and much more.  One daily offering is green chile chicken soup, a warm and nurturing bowl of deliciousness. It’s served steamy hot so that the aroma of roasted chile wafts toward your happily awaiting nostrils. This is a delicious, creamy soup replete with mostly white meat shredded chicken. For a mere pittance, you can have a cup of soup with one of Christy Mae’s burgers.

12 April 2008: All burgers are a broiled one-third pound of choice ground beef served on a toasted bun with lettuce, tomatoes, onions and your choice of Swiss, Cheddar, Jack or American cheese. These beauties are prepared to your exacting specifications and are served with your choice of sides and a crunchy pickle.  The green chile cheeseburger is very good! The ingredients are all fresh and they’re piled on your plate, not on the burger, rendering you in charge of portion control. Mustard and ketchup are provided in squeeze bottles. The green chile is barely piquant enough to register, but hey, it’s green chile and it makes New Mexico go round. The toasted bun has a pleasant, nearly sweet flavor and a nice softness while still being formidable enough to contain the juiciness of this burger.

12 April 2008: Sandwich options fall into two categories: Specialty Sandwiches and Uncle Henry’s Famous Chicken Sandwiches. Among the Specialty Sandwiches is one of the very best Reuben sandwiches in Albuquerque, the Uncle Reuben, a triple-decker engorged with hot corned beef, turkey, Swiss cheese, red onions, sauerkraut, lettuce and tomatoes prepared with the restaurant’s special dressing on grilled rye bread.  It takes two hands to hold the Uncle Reuben and once you grab onto it, you might not want to let it go until you’ve consumed every morsel of this moist, delicious sandwich. Both the sauerkraut and the dressing are applied generously, but not so much that they dominate your sandwich or leave it a sopping mess as Reuben sandwiches are sometimes apt to be. You can actually discern all the ingredients at play with each other, a definite plus in my book.

5 September 2018: Habitues of Gil’s Thrilling… are probably of the mind that Sr. Plata has one culinary obsession, chicken fried steak. It might surprise you to learn he’s also quite fond of chicken pot pie, the more crust the better (that means crust on the bottom, crust on the sides and crust on top). Despite living in the Land of Enchantment for more than a decade, he’d never had pot pie with New Mexican green chile until our visit to Christy Mae’s. The menu offers two versions of its pot pie: the conventional chicken pot pie and a turkey pot pie with green chile. Naturally we opted for the latter.

Nearly as tall as it is wide, the turkey pot pie arrived at our table steaming hot, wisps of aromatic chile-perfumed steam escaping into the air.  This was an indication we should probably wait before diving in lest we risk burning our mouths. After we could wait no longer, we were rewarded by a thick, stewy concoction replete with carrots, peas, celery, turkey and green chile. Alas, only on top could crust be found. Green chile and turkey (mostly dark meat) are the stars here, two ingredients which brought out the best in each other.  Heat, as in the temperature of the pot pie, made more potent the piquancy of the green chile and elevated a good dish into a great dish.

5 September 2018: One item which could easily become a favorite is the dinner salad, a bounteous pile of greens served with your choice of dressing: ranch, bleu cheese, thousand island, French, Italian, honey mustard, fat free ranch and fat free raspberry. While every one of those dressings sound good, we had espied a blue cheese vinaigrette dressing on the specials board and were smitten by the notion of two seemingly disparate concepts working together. Cherry tomatoes, croutons and leafy mixed greens made up this dinner salad the blue cheese vinaigrette made it great with lots of veiny blue cheese crumbles providing a sharp contrast to the tangy vinaigrette.

12 April 2008: If you somehow manage to leave room for dessert, you may have a hard time deciding which one to order. All desserts are baked by Jane “Mom” Tricarico who definitely has a knack for baking. Whether you try a slab of German chocolate cake, a slice of apple pie ala mode or any of the other tasty sweet treats, you’re in for a delicious indulgence. These are the type of desserts only a mom can make.

Take a tip from a guy who took a tip from a police officer in the know and head to Christy Mae’s, one of Albuquerque’s best comfort restaurants.