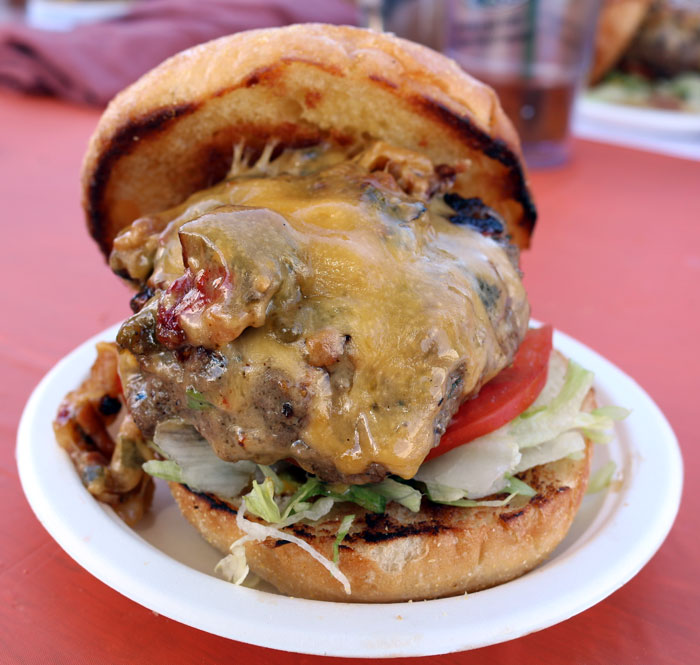 New Mexico’s storied history will recall that 2009 was the year of the green chile cheeseburger.  It all started in May when Bobby Olguin, the gregarious owner of San Antonio’s Buckhorn Tavern bested Food Network celebrity chef Bobby Flay in a “green chile cheeseburger throwdown.”  Capitalizing on the momentum, Governor Bill Richardson called for a statewide green chile cheeseburger challenge to be held at the New Mexico State Fair in September.  Two months later, four-time James Beard award-winning author, the scintillating Cheryl Jamison spearheaded the development of the New Mexico  Green Chile Cheeseburger Trail, the first of the state Tourism Department’s Culinary Trails initiatives designed to further attract savvy visitors who make travel choices based on food.

Not only did these initiatives garner nationwide (if not worldwide) acclaim, they became the impetus for the dawning of a new and even more exciting period for the state’s sacrosanct green chile cheeseburger.  Creative chefs across the length and breadth of the Land of Enchantment’s 33 counties conceived of new and inventive ways of preparing and serving burgers, deploying unique and delicious ingredient combinations to complement New Mexico’s official state vegetable.  For the past six years, the catalyst for this new green chile cheeseburger age has been the Green Chile Cheeseburger Smackdown, an annual event held in Santa Fe and sponsored by Edible Santa Fe, Albuquerque, Taos.

On 8 September 2018, the Smackdown was held at the The Bridge at Santa Fe Brewing Co.  Guests not only got to sample each of seven burgers, they received a People’s Choice ballot with which they could vote for their favorite.  An esteemed panel of six judges (including a certain blogger gastronome) weighed such criteria as melding of flavors, ingredient quality, presentation, how the chile comes through and “burgerability,” how well you can actually pick up the burger and eat it.  As judges, our task was to determine who the “Reigning Chomp” would be, a significant challenge considering just how delicious each and every burger was.  Both People’s Choice and Judge’s Choice selections earned a $500 check, a trophy and most importantly bragging rights.

The aptly named Street Food Institute may have been the only mobile food kitchen (food truck) entrant in the competition, but for the second consecutive year, Chef David Sellers earned the People’s Choice award. This fan favorite was constructed with roast garlic, bacon, green chile, and Vermont cheddar on a homemade brioche kaiser bun. Though judges were advised to “pace ourselves,” some of us (or at least me) enjoyed this burger so much that we (me) almost polished it off. Though that would probably have been the case no matter which burger came out first, this was a wonderful way to start the judging.

The Hamburguesa Santa Fe (ground beef, Hatch chile, Cheddar, avocado, bacon, green chile Cheddar bun) from El Farol was so tall and brimming with so many fresh and delicious ingredients that it definitely took two hands to hold.  Trying to get it all in our mouths was reminiscent of the Discovery Channel’s Shark Week.  Fortunately all the judges seemed to have experience in smooshing down skyscraper-sized burgers without compromising structural integrity or flavor profile.

What do you call a burger which includes a blue corn green chile cheese enchilada with tortillas made by Alicia’s Tortilleria?  El Patron, of course!  Other components of the Second Street Brewery‘s entry include all natural and antibiotic free Colorado based Harris Ranch half-pound Angus beef patty, American cheese and hot green chile from Young Guns Ranch on a locally baked brioche.  Once you get over the surprise, you’ll fall in love with this unique (and uniquely delicious) burger.

In 2017, Marie Yniguez, chef and owner of Albuquerque’s Slow Roasted Bocadillos, proved that her formidable talents extend far beyond her restaurant’s outstanding sandwiches by winning an episode of the Food Network’s Chopped competition.  Her Double Stacked Stuffed Green Chile Cheeseburger (bacon, green chile, sharp Cheddar cheese, and ground chuck on a buttered brioche bun with housemade pickles and housemade honey mustard) is a winner, too.

Helmed for the past six years by Jen and Evan Doughty, both graduates of the Culinary Institute of America (the real CIA), Santa Fe’s The Palace Restaurant & Saloon has garnered acclaim for its inventive New American cuisine.  Its buffalo green chile cheeseburger (green chile, caramelized onion, and pepper jack cheese on a locally make bun) may sound simple, but there’s a lot of deliciousness going on between those buns.  This was the competition’s sole buffalo-based entry.

Competing for the fifth time in the Smackdown, Chef Mark Quiñones and his team found the winning formula in the Green Chile Honey Bun (Hatch green chile, Tucumcari Cheddar, Hatch green chile BBQ, local brisket and short rib, homemade milk bun and housemade honey bacon).  It was the seventh burger served to the judges and even though some of us (okay, probably just me) hadn’t exactly paced ourselves, the winning burger was so good we couldn’t put it down.

Over the years, this blogger gastronome has served as a judge in dozens of competitive culinary events. The Green Chile Cheeseburger Smackdown is among the best organized (thank you Stephanie Cameron, publisher of Edible), most fun and most delicious I’ve ever had the privilege and pleasure to judge. Attending the next Smackdown should be on every gastronome’s “must do” list for 2019.