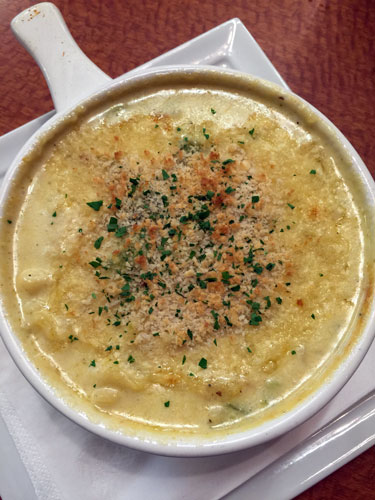 In 2005, Slate Street and an eponymous bistro just north of Lomas became the toast (a garlicky bruschetta) of the town. The Slate Street Cafe opened its doors in July, 2005 in a heretofore lightly trafficked, relatively unknown street north of Lomas. Nestled in the heart of the legal district, the Slate Street Cafe is so, make that Soho cool. Its sleek, modern, high-ceilinged dining room, looming wine bar and capacious patio is frequented by some of Albuquerque’s most hip and beautiful people. It’s a breath of fresh air in a burgeoning downtown district where revitalization appears to be working.

The Slate Street Cafe is the braintrust of a proven and very successful pedigree whose bloodline includes founding chef Albert Bilotti (Al’s NYPD and Kanome) and owner Myra Ghattas whose family owns Duran’s Central Pharmacy. The menu might best be described as eclectic, contemporary and fun with a playful twist to American comfort food favorites such as buttermilk fried chicken, chicken soup, mac and cheese, fish and chips and even homemade cupcakes for dessert. For breakfast, green eggs and ham might just be what the doctor ordered–and not just if your physician is Doctor Seuss. Slate Street’s version of green eggs and ham is an omelet with green chile courtesy of Duran’s.

The ambiance at the 7,400 square foot “bistro with a Western accent” is decidedly contemporary with an energizing bright color pallet. A hard plastic glass shields a half moon bar covered with vintage New Mexico postcards such as the perpetual tourist favorite depicting the uniquely New Mexican jackalope (which Texans have copied). The restaurant’s commodious loft serves as a wine bar (Ghattas is a certified sommelier) where upscale, meal-sized appetizers are served and a great view of the dining room is available.

With something for everyone, it’s easy to see why long lines typify the lunch hour and why the Slate Street Cafe is the place to be on weekends for brunch. An exhilarating menu will challenge you to limit your selection as you really will want to order more than one of each starter, entree and dessert. The starters are chic and eclectic with options ranging from Asian (Japanese style fried rock shrimp with orange Habañero dip) to Middle Eastern (house-made hummus and pita) to dishes that play on New Mexico’s ubiquitous chile.

19 September 2008: While many Duke City restaurants offer Bruschetta (grilled bread rubbed with garlic and garnished with sundry toppings), a Tuscan favorite, the Slate Street Cafe does it best. For a pittance you can have three different Bruschetta from a list of eight. Bountiful portions of lightly toasted bread two can share become the consummate canvas for such toppings as tomato, fresh mozzarella and basil; Feta, sun-dried tomatoes and pine nuts; calabasitas and queso blanco; muffaletta (salami, provalone and olive relish) and blue cheese, spinach and Balsamic reduction. The melding of ingredients makes for lively combinations that both complement and contrast in delightfully tasty ways.

Johnny Carson once defined happiness as “finding two olives in your martini when you’re hungry.” I’d wager he’d find happiness in Slate Street’s fried olives stuffed with garlic and Boursin cheese, a salty, albeit wonderful starter option. Having lived in the deep South for eight years, we thought we’d tried everything (pickles, okra, tomatoes, etc.) that could be fried, but fried olives were new to us. Seemingly equal flavor pronouncements between garlic, olives and cheese will tantalize your taste buds.

Lunchtime entrees are categorized as “mean greens” (the star of which appears to be a profuse Nicoise salad), “sandwich stuff” and “other stuff.” Other stuff includes brown bag fish and chips with a twist. Instead of the usual fried cod, you’re treated to a Guinness stout-battered salmon and house-made chips (American, not British) copiously sprinkled with sea salt served in a warm brown paper bag. We eschewed a very good lemon-basil tartar sauce for malt vinegar in honor of our former home in England. Biting into filets of lightly-breaded, pinkish salmon instead of the boring white flesh of cod is strange at first, but you’ll be won over quickly. The homemade chips, though paper-thin and wonderfully crisp, are perhaps just a tad salty.

19 September 2008: The menu includes several seafood entrees, including fish tacos, an entree few restaurants in New Mexico seem to do well. The Slate Street Cafe’s twist on this California favorite is to compose the tacos on deep fried corn shells, fashioning two crispy corn cups engorged with sundry ingredients. Similar to tostadas, these tacos are a challenge to eat and you might have to dredge the ingredients out of the cup with a fork because the shell falls apart otherwise. Insofar as taste, these are quite good with citrusy, briny and acidic tastes melding together quite well.

3 August 2010: The “lunchy” section of the brunch menu includes a salad that’s not on the “mean greens” section of the regular lunch menu, but probably should be. It’s a pear and Stilton salad constructed with walnuts, Stilton blue cheese, field greens and a port vinaigrette dressing. Stilton blue cheese, a pungent cheese produced only in three English counties, is often eaten with pears, a combination that pits the strongly flavored cheese with the tangy-sweetness of pears. It’s a combination that works, as does the addition of walnuts, not sugared but in their natural state. The field greens are fresh, crisp and a perfect vehicle for the port vinaigrette, a lip-pursing tangy dressing.

19 September 2008: The Slate Burger crafted with black angus beef and served on a ciabatta bun is so good, it (this may sound like heresy coming from me) doesn’t need green chile. As with many New Mexicans, green chile has become a “crutch” and it’s hard to conceive of a burger being good without it. While you can ask for green chile on your Slate Burger, it’s absolutely unnecessary. The main reason is the perfectly seasoned, perfectly prepared to your exacting specifications (it’s perfect at medium) angus beef. It’s a high quality beef with nary a hint of sinew or excess fat. The Slate Burger is an excellent burger for which you can pick your toppings from a bevy of fresh ingredients!

Salty might be the first adjective I’d used to describe the Cafe’s buttermilk fried chicken, but I’d also have to add zesty and mouth-watering. This free-range poultry features three prodigious pieces of mostly white meat with a thick coating of buttermilk-enriched batter seasoned with garlic and red pepper. Not quite as Cayenne potent as Popeye’s chicken, it’s as juicy and flavorful as any chicken we’ve had in the Duke City (which has never been known as a great city for fried chicken).

28 September 2015: Green chile mac and cheese, on the other hand, may eventually grow into yet another dish for which Albuquerque gains acclaim. Slate Street Cafe’s version is among the very best we’ve had: three cheeses–sharp Cheddar, Havarti and Gouda–and rotelli pasta with a pleasantly piquant green chile. It’s an adult mac and cheese with plenty of flavor, richness and personality. The cheeses and green chile go so well together that the flavor of this dish is a sum of this part, not distinct components. That’s how well the ingredients complement one another.

Breakfast at the Slate Street Cafe is an eye-opening experience that might begin with the aforementioned green eggs and ham (a multi-egg omelet folded with double roasted green chile, white cheddar and honey cured ham). Dr. Seuss would have been proud (and undoubtedly addicted to the endorphin rush from the Duran’s recipe for green chile). This delectable morning delight comes with white cheddar hash browns that don’t have that out-of-the-bag taste.

Slate Street’s fried egg sandwich (fried egg, white Cheddar and applewood smoked bacon on toasted ciabatta) will have you forever swearing off Egg McMuffins. It’s a delicious two fisted masterpiece that defines the best in breakfast sandwiches. Applewood smoked bacon is magnificent on its own, each slice a thick and crispy best of the breakfast table example of pure deliciousness. The bacon has a sweet-savory flavor combination resultant from a brown sugar and maple sugar glaze baked into each glorious piece. It is on par with the award-winning honey-chile glazed bacon at the Gold Street Caffe. It’s not the restaurant’s most celebrated sandwich, however. That honor goes to the bacon, lettuce and fried green tomato sandwich which was named one of the city’s 12 yummiest sandwiches in Albuquerque The Magazine‘s annual food and wine magazine for 2012.

3 August 2010: Perhaps even better, if possible, as a morning sandwich option is a brunch-only offering of sausage sliders. Housemade green chile Cheddar biscuits are the canvas for thick disks of green chile turkey sausage, giving you an eye-opening one, two punch of green chile to wake you up. If all that green chile doesn’t do the trick, the chipotle gravy will. It looks innocuous, just like any other brown gravy, but it packs a piquant punch. Unlike the flaky, fall-apart biscuits that don’t hold together, the green chile biscuits hold up well against the moistness of the absolutely delicious turkey sausage.

The restaurant has become famous locally for its gourmet cupcakes and may have, in fact, been responsible for the introduction of cupcakes as a viable dessert option in the Duke City. Gourmet cupcake favorites include chocolate with cream cheese frosting, coconut, blueberry with lemon icing and a Boston cream cupcake drizzled in chocolate ganache and filled with vanilla custard. The cupcakes are so good many guests don’t realize there’s more on the dessert menu than these decadent gems.

3 August 2010: There is, for example, chocolate cake like your mother used to make. There’s a bread pudding with a warm rum sauce–and there’s also a banana split big enough for two. This banana split includes some departures from the conventional Dairy Queen style banana split and its de rigeur vanilla, strawberry and chocolate ice creams. The Slate Street Cafe’s version replaces the strawberry ice cream with a rich, flavorful and tangy blueberry ice cream and its chocolate ice cream has more of an adult (less cloying) flavor. The bananas are caramelized and both peanuts and cashews are piled on top of the real whipped cream for a nice salty taste contrast. This is a calorie-laden bit of heaven.

Slate Street Cafe is pure gold, one of Albuquerque’s paragons of the locavore movement and one of Albuquerque’s best reasons to visit downtown. The restaurant partners with local farmers and producers who provide fresh, high-quality ingredients ranging from organic eggs at breakfast to heirloom tomatoes at dinner. A second-story wine loft is reputed to offer exquisite wine pairings that complement the restaurant’s innovative menu. Wine tastings are held on the first Tuesday and last Thursday of the month.