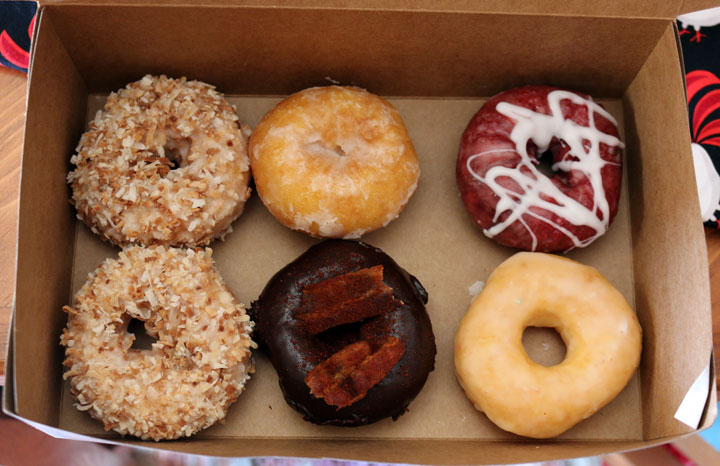 Many years ago if someone proposed a wager of “dollars to donuts,” you might have been well advised to take it. The phrase “dollars to donuts” essentially meant the person proposing the wager thought he or she had a sure thing, that he or she was willing to to risk a dollar to win a dollar’s worth of donuts. Donuts weren’t worth much at the time (and they weren’t very good either) so winning a bet might result in being paid off by a baker’s dozen or so donuts. Today, if someone offers a “dollars to donuts” wager, the counter to a five dollar bet might be two donuts and the donuts would likely be terrific.

Visit a donut shop today and sticker shock might set in. Donuts aren’t cheap anymore, not that it stops Americans from spending our dollars for donuts to the tune of about $3.6 billion dollars per year. Americans consume some ten billion donuts a year. That’s 33 donuts per man, woman and child per year. The demographic which loves donuts most is middle-income men ages 25 to 49 (now you know what accounts for the “middle-age spread”).

As with burgers, donuts are one of those rare foods which have proven to be recession proof. Despite the economic malaise of the past few years, the number of donut shops, amount of donuts consumed and profitability per donut shop has continued to increase every year (save for a short lapse when the nutrition police made donuts non grata). The reason most attributed is that donuts are a tasty and inexpensive comfort food. Similar to the gourmet burger craze which has taken America by storm, consumers don’t mind splurging on donuts that are more costly.

As might be expected for a donut shop bearing the appellation “Rebel,” Rebel Donut is expanding the boundaries of donut conventionality. Even the shop’s logo, a donut with wings, bespeaks of nonconformity, risk-taking, daring to be different. Rebel Donut is taking donuts to the extreme, helping them be all they can be…self-actualizing donuts. Unique flavors include red velvet, chocolate salted pretzel, chocolate mint, peanut butter and apple, peanut butter and Sriracha, carrot cake, watermelon and blueberry pancake and those are tame compared to other donuts on the ever-changing menu.

You’d expect no less than imagination and inventiveness from Rebel Donut owners Carrie Mettling and Tina Winn. Carrie was the founder and creative force behind Cupcake Fetish which she opened in March, 2006 and which began a bit of a cupcake boom in the Duke City. The Rebel owners have hired a like-minded staff and given them the latitude to be visionary. Then, as if the Rebel team wasn’t already taking donut innovation to new heights, they gave Facebook followers an opportunity to suggest new donut ideas. The ideas were so clever that many, if not all, will be implemented. That’s donuts by the people, for the people and by the people.

Striving to be Albuquerque’s premier artisan donut and pastry shop, Rebel Donut showcases more than thirty donut flavors per day with new and different surprises every day. One unexpected surprise for us is the presence of kolaches (Czech and Slovak pastries with a dollop of fruit inside), but not exactly the type of which we experienced in Chicago. Purists will argue that Rebel Donut’s line-up kolaches (sausage and cheese; sausage, jalapeño and cheese; and veggie sausage, green chile and cheese) are not kolaches, but Klobasnek. Call them what you will, but you will call them delicious.

If you have any inkling that these donuts sound like so much fluff and style, one bite will assure you’re there’s plenty of substance beyond the round hole in the middle. These donuts taste like very good renditions of their named ingredients. The Dreamsicle donut tastes like a sweet and tangy orange. The mocha chocolate tastes like a creamy, chocolatey coffee. Then there’s the donuts in which seemingly disparate ingredients (peanut butter and Sriracha, for example) are combined. These, too, as if by some feat of enchantment, are at the very least interesting, but more often than not, quite good.

In 2013, Rebel Donut was selected to compete on a new Food Network show called “Donut Showdown” which premiered April 2nd on the Food Network in Canada. The show made its United States debut on Wednesday, July 3rd on the Cooking Channel. Carrie competed with two other donut-makers for a $10,000 prize. The theme of the show was “Carnival.” Although the Duke City’s dominant donut presence was victorious in 2013, it finished as runner-up during the 2014 showdown.

“To get all existential about it – how do I know the perfect donut for me is the perfect donut for you? The truth is there really is no Perfect Donut because we all love different things. So at Rebel Donut, we are all about options.” How’s that for an appealing mission statement or operating philosophy, not that Rebel Donut’s Web site calls it that. With that level of commitment to variety and people pleasing, is it any wonder Albuquerque’s Rebel Donut was named in January, 2018, “The Best Donut Shop in New Mexico” by Delish. Like Rebel Donut, Delish believes “there’s no wrong way to eat a donut.” To compile its list of each state’s best donuts, Delish consulted Yelp, increasingly the most reliable crowd-source on culinary matters.

The Daily Meal describes donuts as “extremely versatile” and “essentially a blank canvas.” As to prove the versatility of the donut, in November, 2016 the online site compiled a list of America’s Most Outrageous Doughnuts and Where to Find Them. You probably didn’t have to give it a second thought to know Albuquerque’s Rebel Donut would make the list. Breaking Bad fans recall Rebel Donut’s “Blue Sky” doughnut which was topped with something resembling blue meth. That’s not even their most outrageous donut. That honor, according to The Daily Meal, would be reserved for the Dough Boy doughnut which “is studded with chocolate chips, drizzled with ample chocolate sauce, and topped with a hefty scoop of chocolate chip cookie dough.”

Perhaps the most eloquent and certainly the most aptly descriptive quote ever uttered about donuts came from everyman philosopher Homer Simpson who once said “Mmmmmm…doughnuts.” What more needs to be said? Maybe “better than cupcakes, as classic as apple pie.” That’s what BuzzFeed said in October, 2016 when introducing a feature listing the best donut shop in every state according to Yelp. Using an algorithm that looked at the number of reviews plus the star rating for every doughnut business listed on Yelp, the best donut in New Mexico was determined to come from Rebel Donut in Albuquerque. That comes as no surprise to Duke City donut aficionados who have been flocking to the premier artisan donut and pastry shop in the Land of Enchantment.

Although the Cooking Channel doesn’t grace my cable subscription package, I find comfort in knowing Founding Friends of Gil (FOG) member Jim Millington was able to watch the channel’s “Cheap Eats” show in April, 2016 when it featured host Ali Khan visiting beautiful, sunny Albuquerque. Jim reports that “the show is pretty much like Rachael Ray’s old Twenty Dollar a Day show except that Ali lacks Rachael’s cuteness and he has $35. His first stop was at the Tia B’s La Waffleria for vegan waffles which he found to be wonderful. Next stop was the Route 66 Pit Stop for the famous green chile cheeseburger which knocked his socks off. Third was Rebel Donuts. He didn’t even get a donut shaped one. It was long, stuffed and topped with bacon. Papa Felipe’s introduced him to the amazement of carne adovada stuffed in a sopaipilla.” Thank you, Jim.

Rebel Donut gained tremendous notoriety for creating a donut mimicking the potent crystal blue meth made famous by AMC’s Breaking Bad series. In March, 2016, Rebel Donut was honored on Food Network Magazine as one of a dozen “best in dough,” an honor bestowed upon fun donuts. The honoree is Rebel Donut’s pina colada donut, a vanilla cake donut dipped in coconut rum glaze then raw coconut with buttercream frosting. Unlike the Breaking Bad donut which has no actual blue meth, there is actual real rum in the pina colada donut. It’s one in a small line of adult donuts though it can be made “virgin” as well.

Albuquerque is one of the four original cities to syndicate the Jim Rome Show, a sports talk mainstay on 610 AM for nearly two decades. With a unique lexicon and format, the show now boasts of some 200 radio stations across the United States and Canada. Listeners are fiercely loyal to the show, reveling in a format which encourages them to be critical of other cities on the syndicate as well as other listeners, including “laying the smack down” on “Albucracky” and its tumbleweed motif. During Rome’s most recent visit in November, 2016, he and his road crew discovered the “blue meth” donuts from Albuquerque’s Rebel Donut. The donuts were much more than a punchline to the jocular crew, all of whom enjoyed every morsel.

Foursquare, an online presence which purports to help readers “find the best places to eat, drink, shop, or visit in any city in the world,” took on the enviable challenge in October, 2015 of determining the best bakery in each state. Because man and woman cannot live on bread alone, the list included a number of more specialized bakeries such as Albuquerque’s Rebel Donut. Foursquare noted: “From maple bacon to cherry lemonade to chicken and waffle donuts, Albuquerque’s Rebel Donut certainly breaks the mold when it comes to breakfast confections. The shop also gained fame for its signature Breaking Bad-themed “Blue Sky” variety, which was endorsed by the show’s stars themselves.”

While trying to get to Las Vegas, Nevada in 1945, Bugs Bunny accidentally wound up in Germany where for the first time he utters the recurring line “I should have made that left turn at Albuquerque.” Realtors across the fruited plain have come to the realization that many people aren’t making any turns when they arrive in the Duke City. They’re here to stay. For them, the Movoto.com blog, the lighter side of real estate, provided in June, 2015, “29 things you need to know about Albuquerque before you move there” Among the sagacious tips: Green Chile: Love it or Leave Town; Great Community Food at the Grove Cafe; You may not Know the Mufin Man, but Everyone Knows the Candy Lady; The Perfect Ron Swansonable Steak (from Farm & Table at “rustic Old Town”); All Other Bread Will Pale in Comparison (from the Golden Crown Panaderia); These Donuts, Oh Man, These Donuts (from Rebel Donut); and Your BBQ Search is Over at Mr. Powdrell’s BBQ House.

Apple Corporation recognizes the value of rebels: “Here’s to the crazy ones. The misfits. The rebels. The troublemakers. The round pegs in the square holes. The ones who see things differently. They’re not fond of rules. And they have no respect for the status quo. You can quote them, disagree with them, glorify or vilify them. About the only thing you can’t do is ignore them. Because they change things. They push the human race forward. And while some may see them as the crazy ones, we see genius. Because the people who are crazy enough to think they can change the world, are the ones who do.” Rebel Donuts is changing Albuquerque one donut at a time.