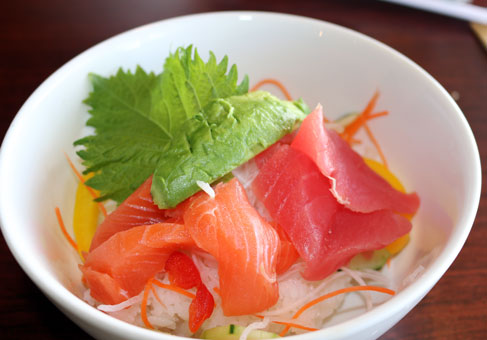 Everyman philosopher Homer Simpson once posed the profound existential question “Donuts. Is there anything they can’t do?” One thing at which donuts seem especially adept is ensnaring the hearts and affections of youth—and not just American youth. The Huffington Post reported recently that in Japan, “the younger generation is increasingly eating Krispy Kreme doughnuts and McDonald’s, not rice.” Fast food chains such as the aforementioned Krispy Kreme and McDonald’s as well as Kentucky Fried Chicken, Domino’s Pizza and others have become ubiquitous in Japan—much to the detriment of traditional Japanese culinary traditions, many of which are closely linked to family relations.

The popularity of fast food is the likely culprit for the steep decline in annual rice consumption across the Land of the Rising Sun. In recent decades, rice consumption has fallen 17 percent, from 9.44 million tons to 7.81 million tons per year. According to the Post, the fast food diet and its “spicy oily food” has also largely decimated the ability of young people to discern “umami,” a fundamental taste in the Japanese palate along with sweet, sour, salty and bitter. The exodus from Japanese culinary traditions has also had an esthetic impact. While Japanese food and its plating have always been beautiful and pleasing to the eye, fast food has a more “thrown together” visual quality.

In my own callow and shallow youth, the addictive properties of fast foods laden with carbohydrates and fats were an enticing mistress and similar to so many of my peers, I succumbed to the lure of caloric overachievement. My epiphany as to alternative (and much better) culinary options occurred when the Air Force sent me to Massachusetts where a world opened up of gustatory delights theretofore rare in New Mexico. The rich, diverse and exotic culinary offerings of Asian cultures became my passion, each new experience teasing and tantalizing my taste buds in so many new and beguiling ways.

So, you’ll forgive me if my first impulse at reading about Japanese youth eschewing their traditional cuisine is to want to shake some sense into them. How could anyone possibly prefer the empty calories and negative nutritional values of American fast foods to the much more delicious, not to mention dietetically healthier Japanese style of eating? My friend Andrea Lin describes the former as “akin to planting a flower in your garden that blooms beautifully for a day and then your soil is destroyed.” The latter is a healthy balance of delicious, filling lower-calorie foods presented beautifully with reasonable portion control.

Author Naomi Moriyama who wrote Japanese Women Don’t Get Fat believes the Japanese way of dining “encourages you to “eat with your eyes” by enjoying the beauty of your food. The result? You’ll want to slow down to savor every bite, which means eating less, because it gives your brain time to realize your body is full.” Eating with your eyes, savoring every bite…if you didn’t know better, you might wonder if these phrases were written to describe a meal at Nagomi Japanese Restaurant on Juan Tabo.

The name Nagomi represents “the comfort you feel after a good meal. Imagine, you take time off from your busy schedule and the stress of everyday life to treat yourself to a really, really good meal. The minute you take your first taste, you feel a warm, comforting, serene feeling that envelops your entire body. You feel a satisfaction deep in your body and your soul. This is the sensation we hope you will feel when you eat our food.” That’s what you’ll read on the cover of the menu and that’s what Nagomi strives to deliver.

Nagomi’s culinary techniques and hospitality practices are steeped in traditional Japanese traditions. For owners Masahito and Kelly Sano, it’s the only way they know how. Masahito’s family has owned a Japanese restaurant in Tokyo for 100 years. Wanting to own and operate his own restaurant, he migrated to America and most recently worked as executive chef for Albuquerque’s venerable Japanese Kitchen. Until its closure several years ago, Kelly worked at Noda’s Japanese Cuisine. While influences from both the Japanese Kitchen and Noda’s Japanese Cuisine are evident, Nagomi has a personality all its own. It’s a personality Nancy D. couldn’t wait to recommend to readers of Gil’s Thrilling (And Filling) Blog. Thank you, Nancy.

Nagomi’s menu is both very traditional and very varied. American tastes which gravitate toward sushi will find a wide array of nigiri and maki rolls as well as sashimi. The menu also features a ramen sure to sate the current ramen craze. You’ll also find curry dishes, tofu in several forms, salads, seafood dishes and so much more. One of the restaurant’s specialties is shabu-shabu, a sort of Japanese fondue which gives diners the opportunity to prepare at their tables, meat and vegetables in a pot of boiling broth.

Scant minutes after you place your order, a steaming bowl of miso soup is delivered to your table. Your first spoonful is a revelation that miso soup doesn’t have to require desalinization. The second spoonful might introduce the element of cabbage, an ingredient not often used on miso soup in other Albuquerque restaurants. You’ll also find Wakame seaweed and finely chopped onions among a very satisfying, very warming miso soup sure to start your meal off on a good note.

Although there are only eleven appetizers on the menu, most are familiar even to casual visitors of Japanese restaurants: edamame, gyoza, egg rolls, tempura, chicken katsu and others. The assorted tempura (shrimp, imitation crab sticks, calamari and three types of vegetables) is always a good bet. The assorted seafood and vegetables are sheathed in a light, golden batter and served with a savory-sweet teriyaki sauce. Each piece is delectable with nary a drop of excess oil dripping off. The textures and flavors range widely so it’s easy to discern exactly what you’re enjoying without having to study its shape.

When in Japan, why have KFC when you can have JFC (Japanese Fried Chicken), more commonly known as chicken kara-age? Chicken kara-age is the antithesis of the uniformly shaped, golden sheened chicken nuggets you find in American fast food restaurants. It’s not as though they’re misshapen and dreary; they’re just not “manufactured” as their American counterparts. Chicken kara-age are bite-sized chunks of soy-sake-ginger marinated chicken coated in cornstarch and deep-fried. They’ll go quickly so it will behoove you to order at least one other appetizer.

The ramen craze in America pales in comparison to the religious fervor with which ramen is regarded in Japan where some spa houses go so far as to offer “ramen baths” for their clientele. Consisting of ramen, pork broth and synthetic noodles, the bath apparently helps improve patrons skin. Frankly, it sounds like a tremendous waste of good ramen. If all ramen is as delicious as Nagomi’s tonk0tsu ramen, anything other than eating it is sinful. For all intents and purposes, tonkotsu is literally the essence of pork distilled down through the process of pork bones being boiled for hours to spoonfuls of murky broth bathed over chewy noodles. My Kim considers Nagomi’s tonkotsu ramen the very best in town.

Years ago, the sublime Noda’s introduced me to donburi, a dish which became preferable to me even over sushi. It’s been said that donburi isn’t so much a dish as it is a concept. Meats, vegetables or seafood and any combinations thereof placed over rice in a deep bowl becomes a donburi though it’s not quite that simple. The ingredients from which donburi is constructed must be unfailingly fresh and must be able to harmonize together on your taste buds. Nagomi offers a number of donburi dishes, arguably the most beautiful being the donburi trio featuring tuna, yellowtail and salmon. Each piece of fish is masterfully sliced and presented. Each is as delicious as it is beautiful.

After finishing a meal in Japan, diners express their gratitude for the meal by saying “gochiso sama deshita,” which translates to “it was quite a feast. It might behoove you to learn those words before visiting Nagomi. You’ll be uttering them after every visit.