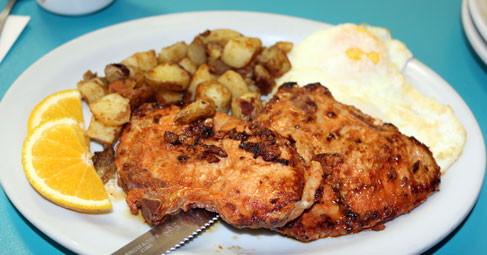 “Food, in the end, in our own tradition, is something holy.
It’s not about nutrients and calories. It’s about sharing.
It’s about honesty. It’s about identity.”
~Louise Fresco (Scientist and Writer)

Santa Fe and its denizens are an accepting lot, open to new ideas and different ways of doing things. When such pioneers as Mark Miller at the Coyote Café and Ming Tsai at Santacafe began fusing other culinary styles, techniques and ingredients with the traditional foods of New Mexico, tradition didn’t go out the window. It helped birth a new genre—an evolutionary fusion that coalesced existing and diverse food cultures and invited experimentation with exotic and beguiling spices, sauces, fruits and produce as well as preparation techniques. More importantly to local tastes, New Southwestern cuisine introduced different chiles with their own invigorating personalities and varying degrees of piquancy.

New Southwestern cuisine isn’t for everybody. There are many New Mexicans who stubbornly resist any evolution of, or alteration to, the traditional foods with which they grew up. They express the sentiment that you shouldn’t mess with perfection and that New Mexican cuisine, especially our sacrosanct red and green chile, is absolutely perfect as it is. Fortunately, Santa Fe is blessed with a significant number of restaurants that continue to prepare and serve New Mexican cuisine in the traditional manner. One of the very best of this genre is Chris’ Cafe which opened its doors in 2012.

Scrawled on the window of Chris’ Café is the statement “Traditional Northern New Mexico breakfast and lunch.” As if to emphasize that point, those words are superimposed over the Zia sun symbol representing the state flag of the Land of Enchantment. This isn’t owner Chris Valdez’s way of declaring war on the avant-garde movement deeply ingrained in Santa Fe’s culinary culture. It’s his way of honoring the sacrosanct traditions with which he was raised–deep-rooted traditions which go back generations. These are the traditions which counterbalance the nouveau trends which spawned the hybrid genre of Southwest cuisine. In Santa Fe, there’s enough room for both.

If the name Chris Valdez sounds familiar, you likely ran into him at the Tecolote Café where he served as general manager for several years…and if you never visited the Tecolote Café, you probably saw him on the Food Network’s Diners, Drive-Ins and Dives (DDD) program. In December, 2007, Guy Fieri and the Triple D crew spent 23 hours over a two-day period at the restaurant. Chris was the consummate host, teaching Fieri how to prepare red and green chile Tecolote style and getting Fieri hooked on the restaurant’s addictive blue corn atole pancakes.

After leaving the Tecolote Café, Chris toyed with the idea of launching a hamburger restaurant and even found a perfect spot for his concept, but non-compete agreement (#$%*&! Burger King) in the area prevented him from opening. Months later while driving on Cerrillos, he chanced upon a recently closed restaurant space that had housed several failed restaurant efforts. Chris was confident he could prepare and serve the high quality food which would make the restaurant a success.

Although his challenge was exacerbated by the fact that the restaurant space is obfuscated from the heavily trafficked Cerrillos by the huge yellow fleet of a Penske truck rental company, Chris had culled such a loyal following from his tenure at the Tecolote, that in short order, his new restaurant started to gain a following. Today, the throngs that visit Chris’ Cafe are a combination of regulars and guests from some of the nearby hotels and motels.

To know Chris even a little bit is to know a man consumed by the need to please. He takes to heart any negative reviews posted on Yelp, Urbanspoon or TripAdvisor with the attitude that all feedback is a gift. To him, it’s also an opportunity to continually improve and not rest on the laurels bestowed by most respondents to feedback providers. Take a gander at the three aforementioned restaurant review sites and you’ll see that most of his guests are more than satisfied with all aspects of their experience at Chris’ Cafe. You can’t please everyone, but that doesn’t stop Chris from trying.

Chris’s customer orientation is mirrored by his staff, many of whom come from the ranks of family and friends. His lovely and gracious daughter Marissa inherited her dad’s ambassadorial qualities. She flits from table to table, ensuring coffee is replenished, providing recommendations when asked and generally making sure all guest needs are attended to. If Chris isn’t out and about ensuring the larders are replete with fresh, healthy ingredients, he’s glad-handing with his guests, many of whom he knows by name. In many ways, it’s like dining at home.

Forgive the cliche, but perhaps the only thing warmer than the service is the coffee, a medium-roast blend from Guatemala. It’s a coffee with assertiveness and personality. That makes it a perfect pairing for the salsa, a salsa which bites back and whose own heat is exaggerated by the hot coffee. Coupled with yellow, red and blue chips, the salsa is addictive and is easily the most piquant item we enjoyed during our inaugural visit. The chips aren’t especially thick, but they’re formidable enough for Gil-sized portions of salsa.

Generally when we think of carne adovada, our mouths water as we contemplate cubed pork marinated in red chile caribe then slow-cooked in the oven, stove top or in a crock-pot for several hours until so tender that tendrils break away easily. Chris’ Cafe demonstrates the versatility of carne adovada by marinating pork chops in that paragon of deliciousness then grilling those chops. Served one or two per order (you’ll regret it if you don’t order two), the pork chop adovada plate shows the versatility of carne adovada while enhancing pork chops. The plate is served with two eggs, a flour tortilla and home fries.

If early morning finds you famished, let The Randolph quell your appetite. The Randolph is the largest plate on the menu which aptly describes it as “a mountain of potatoes, Frito’s corn chips, beans, chile and cheese topped with two eggs. As if that’s not enough, it’s available with your choice of carne adovada, ground beef or chicken. As you scale the potato mountain, you’ll be grateful these terrific tubers are cubed home fries and not out-of-the-bag hash browns. The home fries are topped with what is essentially a Frito pie and two eggs served the way you want them. Blanket the mountain with both red and green chile, equal in piquancy and one just about as delicious as the other. This is one of the best breakfast entrees in New Mexico and this statement would be true even if you scratched the word “breakfast.”

Sweet eats–hot cakes, French toast and cinnamon French toast–are also available on the breakfast menu. A single hot cake is roughly the size of an unidentified craft seen hovering around the Roswell area in 1947. Slather on some butter, douse it in hot syrup and you’re ready to share it with one or five best friends (did I mention it’s rather large?). One thing you won’t find on the menu are the blue corn atole pancakes made famous at the Tecolote Cafe. It’s pretty clear Chris’ Cafe isn’t a reincarnation of the Tecolote. It’s better!

It’s pretty much a given that those among us who prefer traditional to avant-garde will love Chris’ Cafe, but in truth, it’s a restaurant everyone who appreciates great food and terrific service will love. Chris’ Cafe is a paragon of deliciousness in a small strip mall.