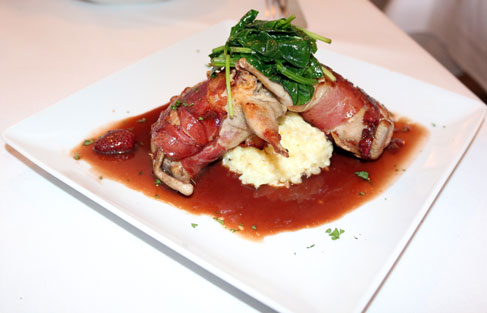 New York Giants quarterback Eli Manning, a Louisiana native who attended Ole Miss, has no problem poking fun at himself…and at stereotypes. During his opening monologue on a 2012 episode of Saturday Night Live, the two-time Super Bowl most valuable player, told the audience he finally feels like a “real New Yorker.” Then as if to demonstrate his urban sophistication, he entertained questions from out-of-towners in the audience. When asked where to get good Italian food in New York, Manning responded “Well, there’s a great place called The Olive Garden. You’ve got to go to New Jersey, but it’s worth it. Hey, I play for the New York Giants, but all my games are played in New Jersey.”

It’s been a long time since the Olive Garden has garnered “Best Italian Restaurant” honors in any of the Duke City’s “best of” polls. In that respect, Albuquerque is one-up on Las Vegas, Nevada where “what happens there, doesn’t always stay there.” Despite Italian restaurants sporting such Food Network celebrity cognomens as Batali, Giada and Bastianich, Sin City diners have consistently voted The Olive Garden as the very best the city has to offer. Does this mean denizens of the Duke City are more sophisticated than those of the gambling capital of the world? Could it possibly mean Albuquerque’s Italian restaurants are superior to those of Las Vegas?

You don’t have to be smarter than a fifth grader (or even a politician) to know the answer, respectively, to these questions is “probably” and “not yet.” The latter response is based on extrapolating from the quantum improvements in Albuquerque’s Italian restaurant scene over the past ten years. If the Duke City’s Italian restaurant scene improves as much over the next ten years as it has over the past decade, it’ll be a force with which to be reckoned.

It’s much too early to know if Tratta Bistro will be mentioned in the rarefied company of Torinos @ Home and M’Tucci’s Kitchina for ushering in a new era of greatness among twenty-first century Italian restaurants. Tratta, which opened its doors in April, 2015, offers the winning combination of an active and engaged owner, talented and creative chef and a limited, but inventive menu sure to entice return visits. Tratta occupies the space previously held by the transcendent Bouche. It’s an intimate space which, season permitting, extends to the outdoors, with an expansive courtyard for al fresco dining.

Tratta’s unique menu is the antithesis of what you’ll find at any of the area’s “red sauce” Italian restaurants. An apt descriptor might be Northern Italian meets fine-dining with distinctive offerings during lunch and dinner servings. The lunch menu lists five salads, four entrees and something heretofore unseen in any restaurant of any genre in Albuquerque: a dozen sliders served three per order. These aren’t your typical burger-based sliders either. Imagine if you will, a terrific trio of sliders constructed from seared ahi tuna, salmon and pancetta, Mediterranean crab cake and baby greens.

The dinner menu showcases five salads and four antipasto dishes, including a bruschetta of the day. Then there are the entrees—a phalanx of steaks, chops and seafood entrees interspersed with other entrees you won’t see elsewhere. It’s obvious someone put a lot of thought into creating a sui generis menu. You just might find yourself selecting dinner based as much for the way the named entree is sauced and with what it is accompanied as you will for that item itself. For example, don’t “Porter House Chops” read better on the menu when they preface cherry cacao sauce and crispy rainbow fingerling potatoes.

Bruschetta is akin to an unpainted Sistine Chapel, a veritable blank canvas waiting to be painted by a culinary artiste. That canvas is essentially just toasted bread, boring by itself but with unlimited creative potential. Tratta’s bruschetta of the day aims to do exciting things to that boring toasted bread. Good fortune smiled upon us when the topping for the toasted bread was a tapenade (tomato, olives, bell peppers) served in a hollowed-out lettuce cup. This relish-like puree of fresh ingredients blended together when still raw is a great way to start your Tratta experience.

Arancini might sound like something involving spiders–and in fact, this deep-fried Sicilian specialty is indeed named for the “spider,” but not the kind that crawls up the wall. They’re named instead for a utensil called a spider, a wide shallow wire-mesh basket with a long handle that’s used to extricate the arancini from the fryer. Three breadcrumb-covered risotto balls stuffed with sausage and mozzarella are served on a shallow pool of marinara. Pierce each gilded orb with your fork and you’re immediately reminded that the chief ingredient in arancini is risotto, a rich, creamy, delicious foundation for a great dish. The marinara is sweeter than it is savory and is seasoned very well. It would make an excellent sauce for any pasta dish.

That is, unless the pasta dish is Tratta’s fried artichokes over hand-cut pasta tossed in a blood orange-grappa cream sauce with pancetta, seasonal veggies and toasted pignolias (pine nuts). Despite having perused this menu item thoroughly, we were somewhat surprised (very pleasantly) at the agrodolce (sweet and sour) nature of the sauce and how it played on the other ingredients. While artichokes are a naturally complementary vehicle for the agrodolce flavor profile, it’s not everyday you have Italian pasta and pancetta tinged with sweet and sour notes. Perhaps we should experience it more often. This is a surprisingly good dish with plenty of pancetta to contrast the agrodolce.

Complements and contrasts also exemplify the quails wrapped in prosciutto engorged with a savory stuffing over a blackberry port demi glace served with a goat cheese risotto. The only element on this entree to which we didn’t apply the demi glace is the goat cheese risotto which should not be tampered with. If you love goat cheese, you’ll understand why. The quails, on the other hand, marry well with the demi glace which imparts sweet and tangy notes. Quail are not a very meaty bird, all the more reason to appreciate the savory stuffing.

There’s an Olive Garden a couple of miles away from Tratta, but given their druthers, savvy diners will opt for Tratta every time. We’ll leave the Olive Garden for the good folks from Las Vegas and maybe a certain New York Giants quarterback.