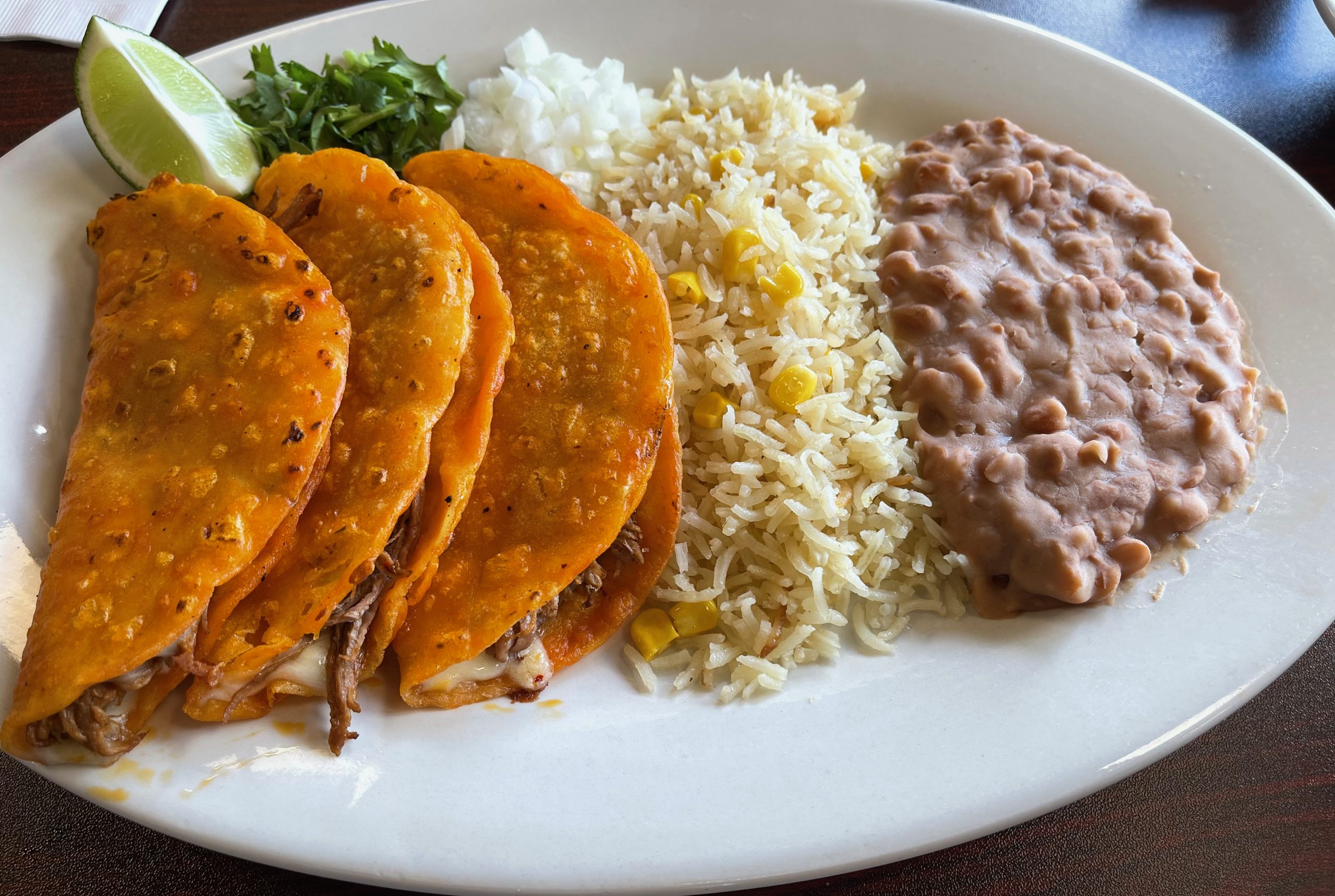 Perhaps because I was away from the Land of Enchantment for much of my Air Force career, one of my favorite bloggers has long been Lisa Fain, the James Beard award-winning “Homesick Texan.”   Like me, Lisa longed for home during the two decades she lived in New York City.  Like me, Lisa returned to her home state, the call of family, friends, bluebonnets, and Tex-Mex luring her back.  Also like me, Lisa is fiercely proud of the cuisine of the state she calls home.  Much of the enjoyment I derive in reading about her favorite foods is in noting the (sometimes vast) differences in foods just across the border.  Take for example cheese enchiladas which she calls “the essence of Tex-Mex.”

She describes them as “a plate of rolled corn tortillas stuffed with orange, oozing cheese, floating in puddles of brown-chili gravy. Yes, that kind of cheese enchilada. The Tex-Mex kind.”  What makes Tex-Mex cheese enchiladas so special to her is the chili gravy which Lisa describes as “a mash-up between flour-based gravy and Mexican chile sauce. It’s a smooth and silky substance, redolent with earthy cumin, smoky chiles and pungent garlic. It’s not fiery, as it was originally created by Anglos, but it does have flavor. And there’s no meat in chili gravy—it’s just fat, flour, chicken broth and spices.”

At the very least, many New Mexicans would find the notion of chili gravy absurd, at most repellent.  During her time in Austin, Albuquerque Academy and UT-Austin graduate Carmen Rising admits to having experienced a “Tex-Mexistential crisis.”  In her quest to find “real” Mexican food in Texas, she encountered the “chili gravy” of which Lisa Fain is so fond: “Next up were chicken enchiladas that came with a list of sauce options including neither red nor green chile, but instead a list of confounding toppings such as sour cream, verde cream sauce, chipotle, and queso (such additions to main dishes would be blasphemy on any New Mexican menu). There was no Spanish rice and, to my horror, no option for blue corn tortillas. Instead came enchiladas covered in mildly spiced queso, fajita-style chicken (instead of shredded), and no fresh, complimentary sopapillas dripping with honey. Uh, seriously?”

It should come as no surprise that enchiladas would engender such a difference of opinion.  After all, tastes and preferences vary.  It’s been that way from the very beginning for the not-so-humble dish whose very name translates from Spanish to “covered in chile.”  Not surprisingly, enchiladas have their genesis in Mexico or more specifically the Aztec capital Tenochtitlán.  In chronicling the history of the conquest of “New Spain,” Spanish conquistador Bernal Díaz del Castillo provided vivid descriptions of the great feasts served at Montezuma’s court.  Among the lavish spreads he described was what is thought to be the earliest description of enchiladas in European literature.

“Two … young women of great beauty brought the monarch tortillas, as white as snow, cooked with eggs and other nourishing ingredients, on plates covered with clean napkins.”  In Nahuatl, the language of the Aztecs the dish was called chīllapīzzali (literally ‘chilli-flute’), suggesting its most distinctive ingredient was the chile pepper.  Chiles were ground up to produce a spicy paste, into which tortillas were dipped, then filled with beans, squash, fish, game, or eggs.  Another Spanish historian described some of the chile-based sauces as “terrifyingly hot.”

While the Spanish forces under Hernán Cortés seized Tenochtitlán and systematically destroyed much of the rich Aztec culture, the conquistadors were content to appropriate much of its cuisine – including enchiladas.  Spaniards added new ingredients including cheese, pork and chicken.  Spicy sauces replaced chili paste.  By 1821, when Mexico gained its independence from Spain, enchiladas were the closest thing the new country had to a “national’ dish.”   Later when the United States annexed Texas, California and much of what is presently the Southwest, Mexican dishes–among them enchiladas–found a place in American culture.

Enchiladas are now a global phenomena, available in Berlin, Tokyo, Melbourne and even Moscow.  Okay, so that’s Moscow, Idaho but given a month, my friend Howie “the Duke of the Duke City” Kaibel, Community Director for Yelp, would have Muscovites posting about their favorite enchiladas in Russia.  With all its permutations and variations throughout the planet, the Aztecs of Tenocyhtitlán would probably be challenged to recognize the dish they held sacred.  The scions of Montezuma would especially probably not approve of the “Americanization” of enchiladas with all our calorific cheeses and creams.

We weren’t quite sure what to expect when we set off for our initial visit to The Whole Enchilada, a Mexican restaurant that launched on November 7th in the Corrales Shopping Center.  The Whole Enchilada’s Facebook page promised “Authentic Old Mexico cuisine with flavors of Mexican origin,”  but Mexico is such a broad and diverse nation that those terms can’t pigeonhole a cuisine.  Perusing the menu gave us hope that this restaurant might just be a little bit different…more exciting and varied.  That menu lists steak, seafood, “Mexican favorites” such as a beef birria burrito, specialties of the house such as enchiladas Suizas and “Chef’s choice” options such as a Mexican broil.  Despite the restaurant’s name, there are only two types of enchiladas on the menu.

26 March 2021: In addition to not knowing what to expect from a menu cutting such a broad swath, we weren’t sure how the items we ordered would hold up after a 20-minute trek (potentially much longer if we cut through Corrales).  We figured we’d probably be cursing the most recent shelter-in-place “reset,” especially with items intended to be served hot.  We knew the salsa and chips would hold up well in transit and they did.  The salsa is incendiary–even for this volcano-eater.  My Kim dipped one chip into the fiery stuff and her eyes watered as she coughed and sputtered profanities at me for not warning her.  During a return visit in March, 2021 with my friend Tom “Sultan of Simile” Molitor, we were feted not only with salsa but with a queso dip.  Perhaps in deference to guests who aren’t as tolerant of piquancy, the salsa seemed somewhat subdued and the queso lacked bite altogether.  In any case, we enjoyed the fresh, housemade chips served warm.

28 November 2020: We also figured the tostadas de ceviche would arrive home fresh and flavorful though we also had to wonder how they’d be packed for us.  A generous plating of ceviche (chopped shrimp cooked in lemon with onion, tomato, cilantro, Serrano peppers served cold) was deposited in a Styrofoam container designed to prevent spillage and keep our food fresh.  The tostadas were placed in a separate container, meaning we’d have to construct our own at home.  Alas, our trip damaged most of the tostadas so we used the broken shards in a manner similar to scooping up salsa.  No harm done.

28 November 2020: One of Pati Jinich’s (the ebullient host of the James Beard Award-winning and Emmy nominated PBS series Pati’s Mexican Table) favorite food memories is sneaking off to Sanborn’s grocery store in Mexico City with her dad. There she’d always eat their famous dish, Enchiladas Suizas (literally Swiss-style enchiladas).  The Whole Enchilada’s version features four hand-rolled chicken enchiladas in a house tomatillo sauce topped with melted Swiss cheese.  We liked the dish, but in all fairness, would probably have loved it fresh out of the oven.  Our commute didn’t do it any favors (drying it up somewhat), but it did increase our resolve to visit The Whole Enchilada and have the dish again one the world resumes a state of normalcy.

28 November 2020: Similarly, our commute wasn’t kind to the churros con cajeta, one of four desserts on the menu.  More precisely, our trip back home dried up the churros.  In our minds we could extrapolate their soft, but slightly crispy texture when freshly prepared.  We have that to look forward to.  The cajeta (thickened caramel usually made of sweetened caramelized goat’s milk) was outstanding, so good we would have loved a pint or so to lap up.  This is a dessert we’ll return for, probably many times.  That cajeta is a wonder.

26 March 2021:  To a sommelier like Tom Molitor, the senses of taste and smell are of primal importance.  Born with a heightened responsiveness to these senses, sommeliers are attuned to nuances of aromas and flavors many of us can’t discern.  That’s one of the reasons I enjoy dining with Tom so much, especially when the experience entails introducing him to something he’d never had before. During our visit to Whole Enchilada, Tom finally had the opportunity to enjoy beef birria mulitas (three fried tacos dipped in chile and stuffed with a melted white Mexican cheese and birria served with rice and beans).

For about three years, birria–slow-cooked beef as tender and fall-apart moist and delicious as any meat you’ve ever had–has been one of the most popular fads in the foodie community (perhaps not as much in New Mexico which sometimes tends to be behind the times).  Though Tom didn’t have a frame of reference for what birria should taste like, he instantly discerned the tenderness of the beef, dipping the tacos into the accompanying consommé.   Alas, because the consommé was somewhat lacking in the aromatics and seasonings that sometimes characterize birria, he wasn’t challenged with the opportunity to discern those aromatics and spices.  He did appreciate the fluffiness of the rice which was studded with corn niblets and liked the refried beans very much.

26 March 2021:  It’s not only proponents of the Paleo diet who enjoy the bone marrow trend that’s swept across North America for several years now.  Roasted bone marrow has been consumed by humankind for as long as we’ve inhabited this planet.  Though composed almost entirely (97%) of fat, bone marrow contains stem cells which produce white blood cells, red blood cells and platelets, which in turn help fight infections, help carry oxygen throughout the body and help with blood clotting.  So there!  Moreover, bone marrow is delicious.

During our inaugural visit to Whole Enchilada, we were warned not to order Tuetano tacos (charbroiled bone marrow served with ezquite, rice and beans) because the marrow would likely “melt” by the time we got it home.  During our sit-in meal, Pancho Villa’s ragtag army couldn’t have prevented me from ordering it.  Two large bones split down the middle and burbling with unctuous marrow were presented beautifully along with two corn tortillas.  Despite the Flintstonian size of the bones, there just isn’t much marrow to extricate so we had to rely on white onions, cilantro and a fiery chile paste to give the tacos some substance though they did take away from the flavor of the marrow somewhat.  Delightful accompaniment in the form of elote (roasted corn scraped off the cob slathered with chile and Cojita cheese) was a highlight.

After our first visit, I debated whether or not to even publish this review considering the take-out experience was certainly not representative of what our experience would have been had we dined on the premises. In the end, I figured if we (mostly) enjoyed our meal despite the situation, how much better would it be once we’re able to have a more leisurely in-place experience. During my second visit, I did discover just how much better the Whole Enchilada is when we were able to sit down for a leisurely meal inside the restaurant.