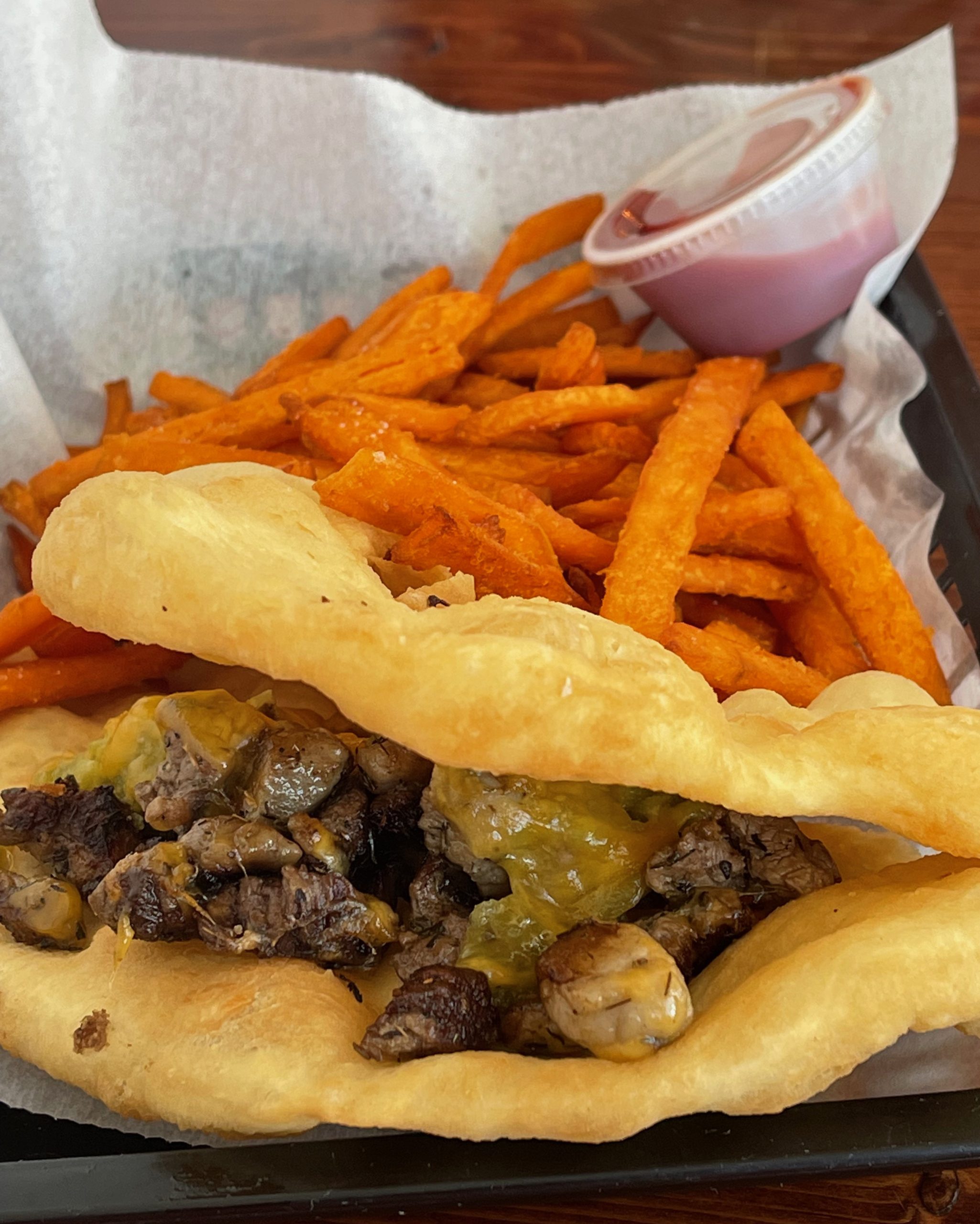 You know you’ve been involved in project management for too long when the only thing that comes to mind when told about a restaurant named “El Roi” is “why would a restaurant be named for a Return on Investment (ROI).”  For those of us who have worked in Information Technology, ROI is a financial ratio used to calculate the benefit an investor will receive in relation to their investment cost.  Restaurants often have a poor return of investment–not just in financial capital, but in human capital.  Restaurants require a significant investment in time by owners as well as kitchen and “front of the house” staffs and the financial return isn’t exactly lucrative.  My Kim theorized that Roi is probably a preferred derivation of Roy.  “By poor spellers,” I chortled.

It turns out my brainy bride was correct…well, almost.  According to Namedat, a website which takes social security administration data and converts it to facts and stats about names of people in the United States, there are actually 8,706 humans in the country with the first name Roi.  Naturally one of the very first questions we asked when we finally made it to El Roi is just what does the name mean.  Owner-chef Joshua Archuleta explained “El Roi” was the name by which an Egyptian slave named Hagar addressed God.  This event from Genesis 16:13 is the only time in which “El Roi” is found in the Bible.  Translating to “the God who sees me,” El Roi ascribes another attribute to God.

Chef Archuleta so admires the Genesis passage that he uses a framed placard to answer the question “Who is El Roi.”  He’s also quite proud of an autograph legendary artist Georgia O’Keeffe presented to his grandmother.  O’Keeffe actually shared some of her recipes with the chef’s grandmother.  Some of the items on the menu are prepared from those recipes.  Framed paintings from famous Navajo artist Fred Cleveland,  a frequent guest at El Roi, hang on one wall.  There’s something to see everywhere you turn at this Lilliputian space.

As interesting as the artwork is, one of the “decorative touches” which most got our attention is a large wooden crate next to the pastry case. Haystacks Calhoun‘s coffin I jested.  Thankfully Chef Archuleta clarified that the “crate” is used to store supplies not as an oversized coffin.  The pastry case is where the featured cake or pie of the day is in full display while the menu on a wall behind the order counter not only lists menu items, but photographs that show how tasty they are.

El Roi has a Lomas address, but it’s recessed somewhat and not exactly easy to find.  If you’re driving west and see Pasion Latin Fusion, you’ve gone too far.  It’s also not especially large; it’s basically half of a duplex structure with one half unoccupied.  Step inside and the restaurant’s size is even more evident.  Most seating is “two top” and there aren’t a lot of them.  It may surprise you therefore that the menu is pretty ambitious, offering both Native American and New Mexican cuisine.

“The El Roi wants to Indigenize your green chile cheeseburger game. When owner Fabby Espitia-Archuleta opened the Albuquerque diner with her husband, Joshua Archuleta, in May 2021, they set out to help at-risk community members gain job skills. The result is a menu of traditional New Mexican and Native American comfort foods, including a frybread green chile cheeseburger ($13). “The frybread gives it so much more flavor,” says Fabby, who emphasizes that a sopaipilla and frybread are not the same. “We do a traditional frybread from scratch,” using a recipe from Joshua’s family in Ohkay Owingeh Pueblo. “There’s not enough Native restaurants,” she says. “So that’s something we are trying to grow.”

You might think that with such an effusive endorsement, I would have leapt at the opportunity to add another green chile cheeseburger to my trophy wall, but (darn that menu) the prospect of a mutton sandwich overruled my burger cravings.  You just don’t find many mutton sandwiches in Central New Mexico even though it’s a staple in the Native American community.  Not on bread is this sandwich presented, but on crispy fry bread.  In addition to the tender, grass-fed cuts of lamb, the sandwich includes a pleasantly piquant green chile and melted cheese.  It’s a very good sandwich though as with too many sandwiches, my sole complaint is the stinginess of the ingredients (specifically the lamb).  With a more generous portion, this sandwich would warrant lots of love and attention from Gil’s Thrilling.

Never mind Native American and New Mexican food.  Sometimes my Chicago-born-and-bred bride craves the foods (mostly meat and potatoes)of her homeland  and not even chile can assuage her cravings.  Her cravings were sated with a plate of steak and eggs (she eschewed potatoes and asked for corn).  She’s a much bigger fan of steak than her husband so we’ll have to take her word for it that this plate was excellent.  Me, unless it has red and (or) green chile, I won’t touch a steak at a New Mexican restaurant.

Dessert options include mini fry breads covered in powdered sugar and topped with chocolate syrup and ice cream (two scoops in a bowl).  A cheesecake in the pastry case was my Kim’s choice.  Topped with a strawberry sauce, it was a rich, creamy and delicious postprandial choice.  So was the watermelon agua fresca, a refreshing beverage any time of year but especially on a hot May day.

One of these days I’ll invite my Information Technology colleagues to El Roi to enjoy their confusion.  The nerdier ones will probably pull out their calculators to figure out whether the investment warrants the cost.  Others will discern it’s another one of Gil’s restaurant finds.  They’ll enjoy it as much as we did.

Very exciting to have more Native American food in town; can’t wait to try it. Thanks for reminding me of the Indian Pueblo Kitchen. Thoroughly enjoyed my only meal there. Looking forward to having one (or ten) more. I’m also reminded of how little I was ever taught about Native culture, sadly.
I grew up in CO and spent many years exploring NM, AZ, UT, WY and SD. Yet it wasn’t until a trip to Monument Valley about ten years ago when I luckily signed on with a Native tour group and learned the true name of the Navajo people — Dine’.
Also in recent years I came to be a fan of the Walt Longmire series by Craig Johnson. Not my typical reading genre, but there is so much about the characters that I fell in love with and Johnson shows nothing but respect whenever he talks about Native Americans. Casting Henry Standing Bear as Walt’s best friend was a stroke of creative genius. Then to add icing to the cake, we were treated to Lou Diamond Phillips in that role when the stories were dramatized. I was able to forgive all of the liberties the screenplay took if only for the sheer joy of watching Lou Diamond Phillips episode after episode after episode…
I have arrived at my point about that; thanks for asking! For anyone else who has ever prevaricated about the term Native American, I offer this excerpt.
(Walt Longmire speaking with someone who has just met Henry Standing Bear for the first time. From Kindness Goes Unpunished by Craig Johnson)
“He’s Native American?”
I smiled. “Indian. Yes.”
“Isn’t Native American the correct term?”
“I suppose, but most of the Indians I know would laugh at you if you used it.” I figured I’d better explain. “Most Indians don’t identify themselves as American particularly, but as members of Nations onto themselves.” She looked at me blankly. “A nation, like a tribe.”
She thought about it. “He said he was Cheyenne?”
“Northern Cheyenne and Lakota.”
“Sioux?”
I shook my head. “You start calling Lakota the Sioux, and you’re going to get in real trouble.”
She laughed. “Sounds more complicated than Native American.”

In the 1930s and 1940s, sometimes considered the halcyon days of Western movies, the Four Corners region was the site of many cinematic classics, quite a few featuring battles between the cavalry and “misplaced” American Indians. Never mind that the Cheyenne and the Sioux actually lived hundreds of miles (and several states) away, the region’s dramatic topography was a perfect backdrop for cowboy conflicts with these Midwestern Indians. Besides that, Navajo “actors” were plentiful. Producers would attire them in war bonnets, arm them with lances and hand them scripts in which they would invariably succumb to the “righteous might” of the charging cavalry.

One movie, John Ford’s classic Cheyenne Autumn, featuring Navajo actors pretending to be Cheyenne, has an almost cult following in Navajo country. Navajo members watching the movie today roar with laughter when Cheyenne leaders speak in Navajo, supposedly discussing treaties and tribal needs. What the Navajo actors in the film really said in somber tones generally concerned the size of the colonel’s privates (not the ones who march) or some equally disrespectful or bawdy double-entendre.

Everytime I hear this account it boggles my mind that the movie was made in my lifetime. I was only 10 years old, but still. I love the fact that the Navajo can derive amusement from it. Did you know that it was based on a true story??! According to Wiki:
“Cheyenne Autumn is a 1964 American epic Western film starring Richard Widmark, Carroll Baker, James Stewart, and Edward G. Robinson. It tells the story of a factual event, the Northern Cheyenne Exodus of 1878–79, told in “Hollywood style” using a great deal of artistic license.” What an understatement! Thanks for helping keep the knowledge flowing, Gil.

The last time I read the account was in one of Tony Hillerman’s novels. For the life of me I can’t remember which one. From what I remember, Tony believed the account was true. Even if it wasn’t, it was pretty funny.

Have you read Tony Hillerman’s novels? They’re all based in Navajo country and as in the Longmire series, Native Americans are treated with the utmost respect. In fact, the two main protagonists–Joe Leaphorn and Jim Chee–are both Diné.

Yes, I love Tony Hillerman. Joe Leaphorn and Jim Chee are real to me. I knew I’d heard of the mocking of Cheyenne Autumn elsewhere; might have been there. Lots of documentaries and books have been input by these eyeballs over the years. 🙂

Totally tangential, but another author who illuminates the assimilated / immigrant experience in America is Luis Alberto Urrea. I highly recommend The House of Broken Angels to begin. If you’re already familiar with it, I hope you found it as likable as I did.

Have you read Rain of Gold by Victor Villaseñor? It’s my favorite Mexican “Roots” story.

Thanks Gil. Just put Rain of Gold on hold at my library.

Cheese on a mutton sandwich?!?!

Hmm…IDK, I may have to order it without, and thanks for the warning about the minimal mutton, otherwise I would have been severely disappointed. Let’s just say I’ve been known to wander around Navajo country looking for mutton sandwiches. Those roadside RVs are like an oasis to a thirsty man! Mmm mmm, I’ve had some really good ones with fresh roasted mutton and the tastiest green chile. Some with lettuce and tomato that seem out of place until you take a bite and decide, no, this is actually quite delicious!

Mutton sandwich and a mutton stew seem to be in order…can’t wait to try this place!