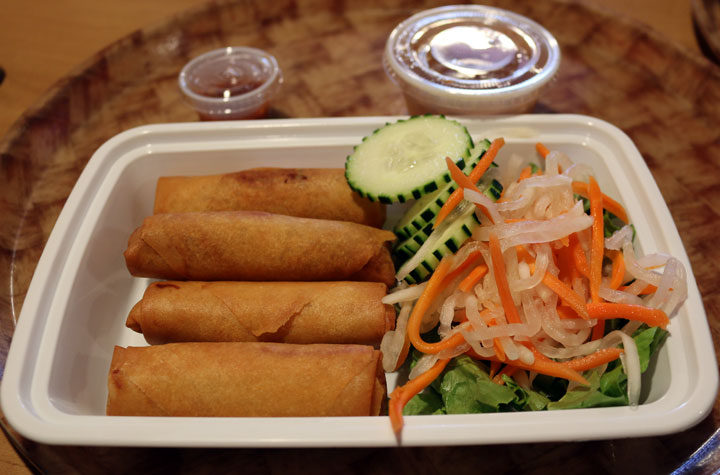 “The banh mi sandwich is really the only good argument for colonialism.”
~Calvin Trillin

By most historical standards, the banh mi is a rather new entrant in the world culinary stage. Its evolution into the revered sandwich we know and love today began in 1859 with the French arrival in Saigon. Along with military occupation, the French brought their c’est delicieux cuisine to Southeast Asia…although to be clear, the colonial rulers never had the benevolent intent of introducing the Vietnamese to their more “refined” cuisine. The French, in fact, initially forbade their subjects from partaking of such stables as bread and meat, believing the Vietnamese diet of fish and rice kept them weak. In time, wealthy Vietnamese who embraced French rule were allowed to purchase sandwiches from expensive bakeries which constructed them on French baguettes (which were too pricey for the poverty classes).

One of the culinary traditions the French brought to Vietnam was casse-croute, a term which translates literally to “break or crush the crust,” but which more often translates to “snack.” Among the most popular snacks was a traditional French baguette which the “upper crust” served with a plate of cold cuts, pate, ham, cheese and butter. Is this starting to sound familiar? This obviously was the deconstructed precursor of the modern banh mi. The term “banh mi,” by the way, actually translates to “bread,” but is understood to refer specifically to the Vietnamese baguette and more often, the sandwiches constructed on those baguettes.

After the French were ousted from Vietnam in 1954, baguettes and cold cuts became increasingly available to the Vietnamese people. It didn’t take long before a tiny family-owned snack bar known as Hoa Ma constructed the first truly Vietnamese sandwich–the banh mi which became the progenitor of the beloved banh mi of today. Hoa Ma’s version of the banh mi included traditional ingredients, condiments, sauces and garnishes the Vietnamese people considered their own. It didn’t take long before street vendors popularized the banh mi as a staple food for the masses.

When Saigon fell to the Communist North Vietnamese Army in 1975, a unified Vietnam entered a period of austerity and hardship. It fell upon those who fled Vietnam’s shores to carry forward to their new homes in America, Europe and Australia, the propagation of such Vietnamese delights as the banh mi and its culinary cousin, pho. Initially some of the expatriates established bakeries and delis which catered to their communities, but when the local populace discovered the incomparable deliciousness of Vietnamese cuisine, its popularity soared. Today there are hundreds of restaurants, bakeries, delis and cafes offering banh mi…and for that, Calvin Trillin’s statement makes good sense.

We’ve been loving banh mi in Albuquerque since at least 1995 when they were called “Vietnamese Sandwiches” by the few Vietnamese restaurants (May Hong among them) which served them. That’s sixteen years before banh mi made it to the Oxford English dictionary. Albuquerque’s very first Vietnamese bakery whose primary focus was banh mi was Banh Mi Coda which opened in 2010 after a short stint as Lee’s Bakery. In its annual Food & Wine issue for 2012, Albuquerque The Magazine named the banh mi at Banh Mi Coda as “one of the city’s “12 yummiest sandwiches.” In early 2013, the Duke City saw the launch of its second banh mi shop when Sai Gon Sandwich opened in Franklin Plaza, a timeworn shopping center made infamous on Better Call Saul. Ten different banh mi adorn the menu at this combination bakery, deli and tofu house.

In November, 2016, SweeTea Bakery Café opened its doors in the Montgomery Plaza shopping center, gracing the Duke City with yet another very impressive array of delicious banh mi as well as some of the best pastries this side of Paris. Not quite a year later, Rolls & Bowls became the fourth Vietnamese bakery-restaurant specializing in banh mi to launch in Albuquerque. One commonality among the quadrumvirate of banh mi purveyors is some of the city’s very best sandwiches prepared and served by very talented and dedicated owners all committed to proving (to paraphrase the Beatles) you can banh mi love (how’s that for a pithy covfefe?).

Located in the timeworn shopping center that also serves as home to Basil Leaf (next door) and La Salita, Rolls & Bowls proves once again that a small space doesn’t belie huge flavors. A handful of booths hug one wall then there’s the counter at which you place your order. That’s the extent of this Lilliputian lair. The face of Rolls & Bowls is the lovely Ai (or the American name Tina if you prefer) who’s lived in the Duke City for nearly a quarter-century though she barely looks much older than that. Ai is as friendly and engaging as any restaurateur in town. Her husband prepares the baked goods and the restaurant’s featured fare.

The menu at Rolls & Bowls is rather ambitious considering its diminutive digs though as previously declared, if restaurants were measured solely by their deliciousness, it would be one of the city’s most capacious restaurants. The menu’s tag line reads “Asian fusion comfort food freshly made for you!” Those comfort foods include rolls (obviously), a number of egg rolls and spring rolls and bowls (of course) of rice served with your choice of chicken, grilled pork char siu (Chinese barbecued pork) and tofu loaf. Noodle dishes also grace the menu as do bowls of salad and assorted breads, pastries and snacks. Then there’s the banh mi, a phalanx of superb sandwiches. To wash it all down, Rolls & Bowls offers boba flavored teas in several flavors as well as an outstanding Vietnamese espresso.

Vietnamese egg rolls tend to be thinner and lighter than their Chinese and American counterparts. Thinner, too, are the wrappers which are tightly packed with ground pork and vegetables (cabbage, dried mushrooms, carrots, and jicama) cut so small and thin that they’re difficult to distinguish by sight alone. It’s only in the tasting that a determination as to their deliciousness can be discerned. Rolls & Bowls prepares excellent egg rolls, as good as you’ll find at any Vietnamese restaurant in town. Accompanied by a tart-tangy fish sauce, they’re a terrific way to start a meal.

The canvas for the banh mi are whole baguettes baked in-house and dressed with a type of aioli spread infused with fish sauce. About ten-inches in length, the baguettes become a repository for a wide variety of fillings: your choice of grilled pork, char siu, meatballs, sardines, ham, chicken, fried eggs and vegetables. A common denominator on all banh mi is a bright, crunchy “slaw” constructed from shredded carrots, daikon radish, fresh cilantro and sliced jalapeños. Freshness and flavor are a hallmark of all banh mi as is value. Unlike so many American sandwiches, the price point of most banh mi remains less than six dollars.

Rolls & Bowls meatball banh mi ranks with its brethren from SweeTea as my favorite Vietnamese sandwich in the Duke City. There’s just something magical about the moist pork meatballs interplaying with the crunchy slaw that appeals to my taste buds. As with all banh mi, the secret to this sandwich is the balance between meatballs, slaw and sauce. Banh mi are not intended to be behemoth “Dagwood” sandwiches crammed with meats and cheeses. You can actually taste, discern and appreciate every single component of every banh mi.

Perhaps the most popular banh mi across the fruited plain is the one constructed with grilled pork. Yes, this is the same grilled pork that’s magically marinated with the sweet spices of anise and cinnamon to create an olfactory treasure that dances on your taste buds. The grilling infuses the flavors of those spices deeply into the pork while imparting the unmistakable essence of meats prepared on a grill. The grilled pork banh mi is the favorite of my Kim–to the point that all she ever lets me have is one bite of her sandwich.

Vietnamese steamed pork buns are, much like their Chinese counterparts, a type of dumpling made with leavened dough and rolled out into round shapes then stuffed and steamed. Rolls & Bowls shapes their steamed pork into pig faces, a precursor to the delicious pork sausages with which the buns are stuffed. The exterior of these steamed pork buns is cakey and dense indicative of being steamed for an optimum time (when not steamed long enough, the interior can taste undercooked and doughy). The interior is stuffed with sausage and hard-boiled egg tinged with a sweet barbecue-like sauce. These are addictive.

Rolls & Bowls–the name slides off your tongue like a rhapsodic melody and indeed, the flavors conjured in the kitchen are carefully orchestrated to give diners maximum enjoyment. Rolls & Bowls is a wonderful addition to the Duke City’s increasing repertoire of banh mi restaurants.