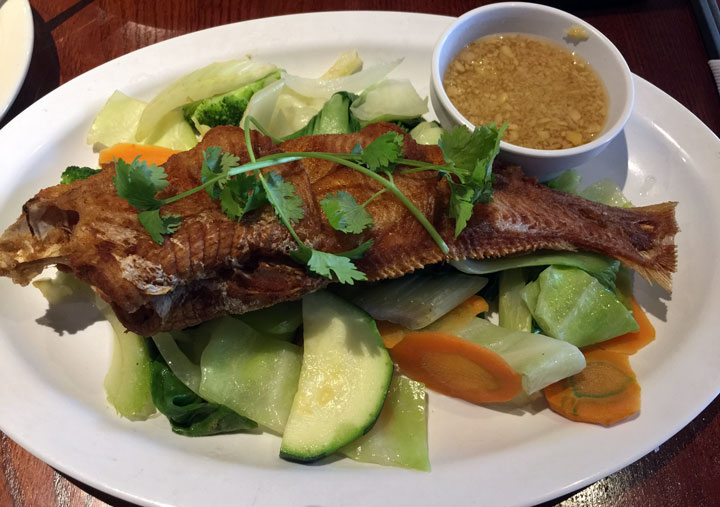 “Do we really want to travel in hermetically sealed Popemobiles
through the rural provinces of France, Mexico and the Far East,
eating only in Hard Rock Cafes and McDonalds?
Or do we want to eat without fear, tearing into the local stew,
the humble taqueria’s mystery meat, the sincerely offered gift of a lightly grilled fish head?
I know what I want. I want it all. I want to try everything once.”
– Anthony Bourdain

Genesis 11 recounts a time when the entire world had a common language and dwelt as one people. Alas, hubris overtook the generations of survivors of the great flood who decided, with great unity of purpose, to build a city named Babel with a tower that would reach to heaven itself. God immediately knew this “stairway to heaven” was essentially a self-aggrandizing monument to the people themselves, calling attention to their own abilities and achievements instead of giving glory to God. Consequently, God confused their language, causing them to speak different languages so they would not understand one another. He also scattered the people of the city all over the face of the Earth.

Some Biblical scholars believe this event marks the point in history when God divided the Earth into separate continents. Whether or not you believe this Old Testament account, there’s no denying some good would ultimately came from such a division of humanity. That may be especially true from a culinary perspective. It stands to reason that a common language and proximal dwelling would limit the diversity of culinary thought and opportunities. Conversely, the more the population spread out across the wide expanse of climatic and topographical variation, the more diverse the culinary opportunities.

Why then, in an increasingly connected and informed world, do so many people limit their culinary opportunities and refuse to deviate from their culinary comfort zones? It’s a matter long pondered by many of us who look upon Anthony Bourdain’s aforementioned sagacity as a marching order–those of us who want it all, who want to try everything at least once. Culinary bon vivants see the diversity of dining as an adventure, an experience to be cherished and repeated. It’s because we have this sense of adventure that we love the diversity proffered by such restaurants as the Basil Leaf on Eubank.

Heck without the culinary diversity resultant from topographical and climatic variety around the world we might not even have basil itself. Basil is one of the most popular culinary herbs in the world, a richly aromatic, slightly spicy ameliorant to many of the best dishes proffered at all Thai and Vietnamese restaurants. Also known as “hairy basil” and by its Thai name of “horapa”, it’s used in salads, soups, curries and as a garnish. The aroma of Thai basil is stronger and sweeter than its Italian counterpart and it has a peppery flavor slightly reminiscent of star anise. It’s no wonder so many Thai and Vietnamese restaurants across the country are named for this diverse and revered herb.

The Basil Leaf occupies one of those seemingly cursed restaurant locations in Albuquerque, a venue which has seen a number of Thai and Vietnamese restaurants give it the old college try before succumbing to both economic malaise and absence of culinary adventurers. Perhaps the Basil Leaf has the familial pedigree to succeed where others have failed. Family members include Tony Trinh who owns and operates Relish, one of the Duke City’s most popular sandwich shops. Other family members own and operate Pacific Rim, the only Vietnamese restaurant in Rapid City, South Dakota.

The menu at Basil Leaf isn’t quite the voluminous compendium you’ll find at other Vietnamese restaurants throughout the Duke City. The menu is segmented by related fare: appetizers, beef noodle soup (pho), rice dishes, stir-fried noodles, vermicelli, kid’s menu and beverages. Unless you’ve got a predetermined notion what you’re in the mood for you’ll spend some time perusing the menu. It’s a terrific menu promising a culinary adventure in every bite.

18 October 2014: For some reason, the Vietnamese crepe is listed as an appetizer. Whether deliberate or an anomaly, you’ll marvel at the size of this golden-hued (courtesy of tumeric) beauty. Resembling a well-engorged egg omelet, the half-moon shaped crepe takes up half the plate. The other half is covered by fresh, crisp vegetables: a shredded carrot and daikon salad, whole leaf lettuce and sprigs of basil. It’s much like the vegetable accompaniment for pho. The Vietnamese crepe, made from coconut milk and rice flour, is stuffed with savory ingredients: bean sprouts, white onions and green onions and is served with fish sauce and your choice of tofu, shrimp, pork or chicken. Though the crepe itself has a slightly sweet flavor, it’s rare that Vietnamese crepes are stuffed with sweet fillings or toppings. Pan-fried so they’re just slightly crispy, the crepes have a mild flavor profile for which the tangy, acidic, slightly piquant fish sauce is a perfect foil. At Basil Leaf, the Vietnamese crepe is an appetizer built for two, especially if you have any expectation of enjoying an entree, too.

18 October 2014: Alas, the best laid plans of gastronomes often go astray. After consuming the entire crepe, my plan was to sample a few bites of my entree then take the rest home for my Kim to enjoy. The Sizzling Clay Pot Rice dish had other ideas. It would ensnare me with its preternatural deliciousness and it wouldn’t let me go until nary a grain of rice remained on the clay pot. This is a dish which earns its name. It remained almost too hot to eat even after the Vietnamese crepe was a memory As you eat, the clay pot remains piping hot throughout your meal which allows the slightly smoky sauce of your choice of meat or tofu to caramelize and waft invitingly for the duration of your meal. For this reason, clay pot cooking is popular throughout Asia where the clay pot is used as both pot and serving dish. Aside from rice, this dish contains broccoli, Vietnamese sausage, mushrooms, cashews, cilantro and green onion along with your choice of pork, tofu, shrimp, beef, chicken or a combination thereof. To the pork goes my highest recommendation. It’s got a smoky, wok-fried flavor and light sweetness that comes from a sweet-savory-tangy marinade that renders the pork’s edges a reddish hue. Only the Chicken with Chinese Basil in Hot Pot at China Luck is in the rarefied company of this fabulous hot pot dish.

In its annual Food & Wine issue for 2017, Albuquerque The Magazine awarded Basil Leaf a Hot Plate Award signifying the selection of its Combination Sizzling Clay Pot Rice as one of the “dishes…that’s lighting a fire under the city’s culinary scene.” Considering the thousands of potential selections, to be singled out is quite an honor.

5 October 2017: For years, the transformative ginger catfish at the much missed May Hong has served as a benchmark, a dish that serves as a standard by which other ginger catfish are measured and judged. In my experience, only sister restaurant Cafe Dalat serves a comparable ginger catfish. At both May Hong and Cafe Dalat, a whole catfish–head and all–is used (you’ll find some of the best meat in the cheeks). Basil Leaf’s version is quite a bit different than my two favorites. Instead of a sauce the color of luminous, fluorescent Day-Glo or maybe French dressing served atop the catfish, Basil Leaf will give you a small cupful of a yellowish sauce. Sure it’s ginger, but it doesn’t have as much kick and flavor as at my benchmark restaurants for this dish. Additionally, even though the menu indicates “whole” catfish, as the photo shows, it’s actually served decapitated. Served on the side are steamed mixed vegetables.