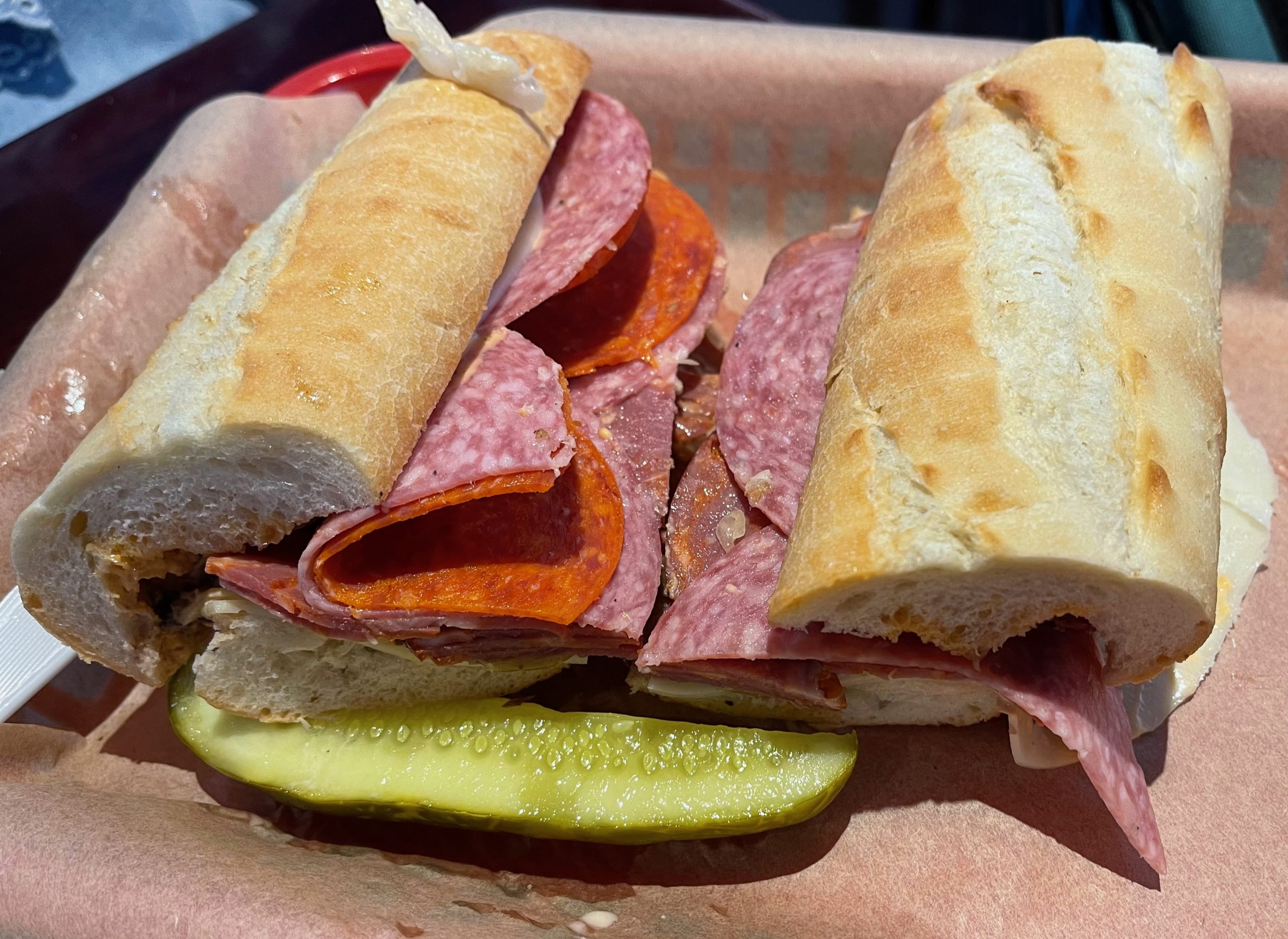 Arnold Schwarzenegger, Steve Jobs, Eddie Murphy, Jessie Jackson, entire NBA rosters.  Often missing from scandal sheets outing male celebrities who have fathered love children is the name of one Dagwood Bumstead.  From all outward appearances, Bumstead is an average white collar employee and loving family man with a penchant for taking naps, luxuriating in a bubble bath and constructing and consuming tall, multi-layered, poly-ingredient sandwiches of gravity defying height topped with an olive on a toothpick.  Appearances can be deceiving.

You’re reading it here first.  Dagwood Bumstead’s illegitimate son is (brace yourself) Norville “Shaggy” Rogers, a lanky would-be hipster who always seems to have the munchies.  Shaggy is a nimble contortionist with a penchant for hiding (cowering) in impossibly small places and for consuming impossibly large (Dagwood-esque) sandwiches in a single bite.  When sandwiches aren’t available, Shaggy will often tussle with his dog Scooby-Doo for pet snacks.

DNA evidence hasn’t confirmed Shaggy’s paternity, but telltale (albeit circumstantial) signs seem incontrovertible.  The most telling sign is, of course, their mutual love of food. Dagwood married a woman named  Blondie, a name she shares with one of his favorite desserts (the non-chocolate brownie).  He and Blondie even named one of their children Cookie for yet another of his favorite foods.   Both Dagwood and Shaggy like bizarre food combinations.  For Shaggy, it’s chocolate covered hot dogs and cheese pizza with pickles, while Dagwood basically just stacks any and everything he can find in the fridge between slices of bread.

Rare is a sandwich shop that doesn’t have a sandwich on its menu not named for Dagwood.  Naturally, the Dagwood is an edible superstructure constructed from large quantities and varieties of cold cuts, cheeses, vegetables and additional slices of bread, all usually crowned with a toothpick.  As far as I know, there aren’t any sandwiches called the “Shaggy.” The image that name conjures is probably too unappetizing for any food.

In recent years, gourmet sandwiches with high quality ingredients in creative combinations, have replaced skyscraper-sized bread and beef behemoths.  It’s a winning concept–an award-winning concept.  In 2004, transplanted New Yorker Johnny Orr and his partner Tony Nethery launched a fabulous fromagerie and charcuterie (that’s cheese and meat) shop with a menu of gourmet sandwiches and salads unlike any heretofore seen in the Duke City.  They named their gourmet sandwich shop “Relish,” a name which aptly described their shop both as a verb (as in relishing the great tasting cheeses) and as a noun (as in the amazing condiments used on the sandwiches).

Since its launch, Relish has earned every conceivable local publication’s “best of” awards in the sandwich category.  Though it  hasn’t featured its unique array of glorious imported and domestic gourmet cheeses and magnificent meats in years,  Relish still serves up some of the Duke City’s very best sandwiches and salads with products from the ubiquitous Boar’s Head.  The most popular hold-over from its days as a cheese and meat market is the mozzarella which is made fresh daily in-house.  With a flavor reminiscent of whole-milk with a delicate tang, it’s so good Relish has a strict no-refrigeration, eat that night policy because that’s when the mozzarella is at its optimum in freshness and flavor.

Today, Relish is owned by Tina Bui-Burgos, a hands-on, customer oriented proprietor who recognizes that in a fickle restaurant market, an exacting balance between continuing to do what has worked well and continuously innovating and keeping things fresh is the only approach by which any eatery will survive. To the former point, Relish continues to hand-craft all sandwiches from scratch and to order using fresh, high-quality ingredients including homemade dressings and condiments that embellish and complement each sandwich.  All sandwich orders are served with such sides as potato salad, apple slaw or pasta salad plus a pickle. The canvas for all sandwiches remains the fresh, delicious bread baked by Albuquerque’s Le Paris French Bakery.

9 July 2022: To the point of keeping things fresh, Relish offers nine salads, some of which should be considered among the very best in the city and all of which are unfailingly “just picked” fresh.  You might even happen upon a salad special.  Such was our luck during a July, 2022 visit when a Farmer’s Salad (strawberries, mixed greens, grapes, craisins, blue cheese crumbles) was offered.  It’s not every farmer who can grow and cultivate such fresh, crisp and delicious ingredients.  It’s not every sandwich shop which has the savvy to put them all together as deliciously.

It’s not just your imagination that merely changing the size of something can actually change the perceived taste.  This is oh-so-true of the chop chop salad in which everything is chopped to a smaller size including the lettuce. This creates an opportunity to get all the ingredients of the salad in each forkful which means you actually get more flavor in every bite.   The harmonious convergence of ingredients in the Chop Chop salad  (artfully crafted of grilled chicken, haricot verts (French green beans), roasted red and yellow beets, cucumber, feta cheese, roasted red peppers, olives, artichokes, mint and grape tomatoes tossed in preserved lemon vinaigrette)make it one of the best salads in the city.

The sandwiches are more than enough to excite anyone craving a sumptuous repast and not a gut-busting sub or boring burger.  The challenge is figuring out which sandwich to have from a menu of hot- and cold-sandwiches that offer inventiveness and excitement.  All sandwiches have upped in price over the years, but unlike the “five dollar foot longs” at the chain leader, these will inspire return visits–many of them.  That includes the two vegetarian friendly sandwiches–the Mozzarella Sandwich and the Mediterranean, both of which are terrific.

9 July 2022:  J. Kenji Lopez, the brilliant writer for Serious Eats rhapsodized lyrically about the muffuletta, the classic New Orleans sandwich.   “Muffulettas,” he wrote “are nothing like the super-band of the sandwich world. Sesame-crusted bread isn’t David Crosby, olive salad doesn’t compare to Stephen Stills, and a few sliced cold cuts sure as heck ain’t no Graham Nash. But like most great and simple foods, it’s the magic that happens when you combine these basic elements in a very specific way that elevates the sandwich to true greatness.”  Even with all the right ingredients, however, a sandwiches can’t be called a muffuletta unless it’s got the muffuletta attitude, the indefinable mardi gras spirit that bespeaks of the French Quarter and strong creole influence.

If you read the caption beneath the photo above, you might be thinking “That’s not a muffuletta!”  Indeed, it’s wholly unlike any muffuletta we enjoyed during our eight years on the Mississippi Gulf Coast.  Not even close!  It would be easy to whine, complain and point out the differences, but that would detract from any enjoyment you could have from an otherwise good sandwich.  So damn the misnomer.  Relish’s muffuletta (salami, capicola ham, pepperoni, Swiss cheese, Provolone cheese, olive tapenade on a hoagie) is a good sandwich.  Just don’t ponder what you’re not having

9 July 2022:  According to Thesaurus Plus the terms “Double-decker” and “Dagwood” are semantically related. You can use “Double-decker” instead a noun “Dagwood”.  Dagwood Bumstead would be so proud to have a layered sandwich named for him.  Relish offers a double-decker Reuben which includes both pastrami and corned beef along with Swiss cheese, sauerkraut and Thousand Island dressing with a hint of horseradish on toasted marble rye bread.  The hint of horseradish is just enough to cut the dill sweetness of the Thousand Island dressing and punch it up just a bit, but not so much that it takes away from the authenticity Reuben fanatics want. The sauerkraut is indeed sour, a lip-pursing variety.  The toasted marble rye is an excellent canvas, toasted to the exacting level just beyond that fine line between bread and toast.

The most common complaint I’ve heard about Relish is that it’s overpriced.  Sandwiches approach the ten dollar price point and aren’t necessarily the Dagwood-style skyscraper sandwiches you might expect for the money.  What you do get is an inventive, high-quality sandwich made to order, not some copycat chain’s rendition of the all American favorite.