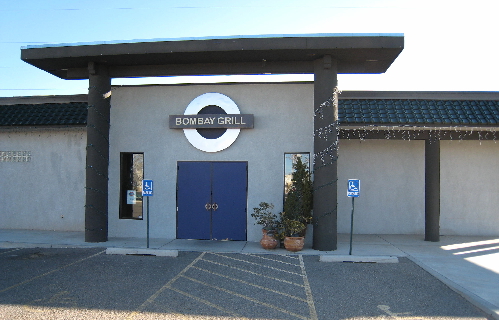 The unmistakably pungent aroma of exotic spices wafts through the air and remains with you long after you’ve finished your meal at the Bombay Grill, a 2004 entrant in the growing northwest Albuquerque dining scene (which, unfortunately, is dominated by mediocre chains). That’s the last time you’ll see “mediocre” and Bombay Grill in the same sentence because this charming and outstanding Indian cuisine establishment is high on our “must return” list. There are many reasons for that and they’re certainly not encapsulated in the gargantuan lunch buffet.

The lunch buffet is admittedly a wonderful way to introduce novitiates to one of the world’s most sophisticated and ancient cuisines, one that in which herbs and spices are used liberally to flavor each dish. Bombay Grill specializes in the cuisine of Northern India where dairy products such as paneer (a farmer’s cheese similar to cottage cheese), yoghurt and ghee (clarified butter) are typical ingredients. Chefs in Northern India also employ the tandoor, a large cylindrical coal-fired oven to prepare various flat “breads” such as naan and roti.

The Bombay Grill occupies the site of a failed Chinese restaurant and though it can’t hide some of the architectural features of its predecessor, it has established an enchanting ambience all its own. Subdued lighting and rich accents are immediately evident. A decorative cascading water wall divides the dining room and provides a relaxing syncopation that, accompanied by the distinct sounds of sitar music, will lull you into a perfect state of contentment. Images depicting life in India (my favorite is of an a man astride an elephant passing by a Wimpy’s restaurant) are projected onto the restaurant’s southern wall. The slide presentation runs continuously.

Against a pillar near the center of the dining room is a small altar to Ganesha, the anthropomorphic Hindu god and master of intellect and wisdom. Ganesha sports the trunk of a one-tusked elephant but is otherwise human, albeit with four arms, on which dollar bill offerings are placed. Out of respect for the Hindu culture, I did not photograph Ganesha. The wait staff is impeccably attired in perfectly starched white shirts, ties and black trousers. Even more impeccable are the manners and non-intrusive friendliness of the staff. It is an unfailingly courteous and professional wait staff seasoned with experience in pleasing their patrons. A dining experience at the Bombay Grill is wholly unlike dining at a restaurant staffed by pimpy teenagers whose wait schtick quickly becomes annoying.

Shortly after you’re seated a complementary plate of papadum accompanied by three vessels of Indian chutneys is brought to your table. Papadum are crispy crackers somewhat resembling flattened taco shells. They’re made with lentil flour and have a brittle texture, breaking easily so they can be dipped into the accompanying chutneys.  Indian chutney is usually prepared to be eaten fresh and as a genre, might be compared to the familiar salsas served throughout New Mexico. Authentic chutneys usually contain a significant amount of spices, including piquant green chili peppers, and center around a wide variety of vegetables or fruits. Among the most popular chutneys are a red onion chutney, a mint chutney and a fruity, semi-sweet tamarind chutney (all three pictured above). The chutneys at the Bombay Grill are absolutely delicious, each one imparting its own distinct imprint onto your taste buds. The semi-sweet, tangy and piquant tamarind is our favorite, but all three complement one another very well.

As in India, you’ll also want to use naan (a freshly baked, flat, white wheat bread with a slightly flaky crust) to sop up the delicious chutneys. The Bombay Grill offers a variety of nan including an absolutely delicious garlic nan which is garnished with parsley and slightly moistened with oil. As heretical as it may sound, there are times in which I believe nan is even better than the ubiquitous New Mexican tortilla with which I grew up. That’s especially true when the nan is from the Bombay Grill where the nan may have no equal.

Although the menu is replete with many tempting offerings, to experience the best the restaurant has to offer, you’ll want to order one of the dinners (which might be called combination plates elsewhere). The dinner offerings feature several complementary dishes and are served in a compartmentalized plate.

If you’re in the mood for seafood, there may not be anything more satisfying than the Bombay Grill’s dinner offering featuring tandoori baked prawns and cod. As with other tandoori entrees, the cod and prawns are marinated in a mixture of yoghurt, spices and herbs and are imbued with a wonderfully distinctive smoky flavor. While the gigantic prawns have the distinctive red coloring of most tandoori prepared items, the cod is almost yellowish. It’s also light, flaky and absolutely delectable.   The seafood dinner offering is accompanied by a saffron flavored Basmati rice with fresh green peas, your choice of standard or garlic nan, saag paneer (typically a side-dish made with the wonderful farmer’s cheese called paneer and spinach sautéed exotic spices) and your choice of soup (chicken or dal (lentil)).

The accommodating wait staff may even allow you to exchange the saag paneer (delicious in its own right) for my favorite vegetarian entree anywhere, mattar paneer, green peas and homemade farmer’s cheese in a mild gravy. This rich dish is brimming with savory spices and luscious flavor.

Another excellent dinner offering features tandoori baked chicken and lamb. The lamb is tender and well-seasoned with nary a hint of the gaminess for which lamb is known.

Mango, a popular ingredient in Indian cuisine is featured in mango lassi, a homemade yogurt with mango pulp. Lassi is served at room temperature, but is healthful and delicious. For dessert, a popular offering is the mango custard made with mango pulp and custard.