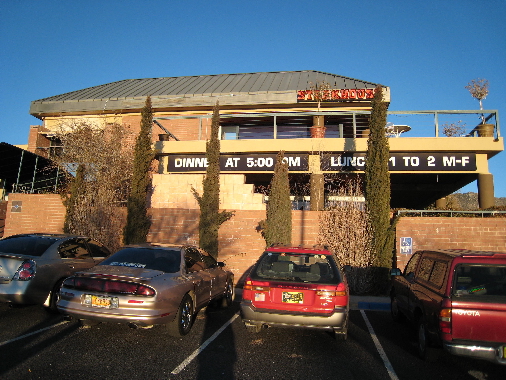 Since the nineteenth century, land and cattle companies have been established throughout the west to buy, sell and lease land for grazing and breeding beef cattle. During years of ample water, high beef prices and fortuitous grace, profits are generally high.

While most Albuquerque urbanites might not know or concern themselves with the history of cattle raising in the old west, they do know and appreciate great steak. For years they’ve been patronizing the Great American Land and Cattle Company on Tramway and Indian School.

Starting in 2006, they won’t be able to do so. That’s because the restaurant has undergone a name change, one that better reflects the restaurant’s culinary fare (and I suspect prevents any confusion with the Texas Land And Cattle Company, a chain restaurant.)

The addition of salad to the menu is just one of the many changes at Albuquerque’s very best steakhouse. The Great American Steakhouse now offers “Wagyu” steak, the American version of the Japanese “Kobe” beef. Just as the French are vociferous that the term “champagne” should only be used to refer only to the sparkling wines made in the Champagne region, the Japanese Minister of Agriculture is adamant that “foreign-bred” cattle should be labeled Wagyu (wa means Japanese, and gyū means cattle, or simply “Japanese cow”)

No matter what it’s called, Wagyu beef is more than a cut above (forgive the pun). Wagyu is a breed of cattle genetically predisposed to intense marbling. It produces a high percentage of buttery-tasting, unsaturated fat laden beef.

Wagyu cattle are hand-massaged with sake and are fed a daily diet of corn, alfalfa, barley and wheat straw and are raised in a stress-free environment. The result is meat that is extraordinarily tender and extremely expensive.

Instead of the US Dairy Association’s seven quality grades (USDA Prime, Choice and Select being at the top), Wagyu beef is graded on a 12-point Kobe marbling-score scale. The greater the marbling, the higher the score–and obviously, the cost. For comparison, USDA prime would have an equivalent ranking of four to five and “certified angus” at most restaurants would rate a mere two or three.

At the Great American Steakhouse, the Wagyu beef might have a Kobe rating of six or seven, but to steak aficionados, it will certainly rate a perfect ten. The price is more than reasonable, too. You can have a three-quarter pound Wagyu top sirloin for under thirty dollars, a steal at the price.

Even before its introduction of Wagyu beef, I have long contended that the Great American serves the most tasty steaks in the Duke City–a steak done right, where a 16 ounce slab of beef doesn’t shrink to 11 ounces after grilling!

At the Great American, the New York steak is almost two inches thick and is a full pound of USDA beef, butterfly cut when ordered at medium, medium well or well done (don’t do this to any steak). Similarly, the well marbled ribeye covers the entire plate and is nearly as great to look at as to consume. These delicious steaks, optimized with the right amount of marbling, require no additives (although the restaurant does sell very good steak condiments). It is easily the tastiest steak in Albuquerque, well worth the price.

As tasty as the standard New York steak is, one bite of the Wagyu top sirloin and you might swear off any other cut. Alas, because Wagyu beef is in such limited supply, the restaurant might run out if you don’t get there early.

The Great American’s wonderfully unctuous Wagyu beef doesn’t just titillate your mouth; it makes love to it–slowly, sensually and with a deliberate precision that seems to touch each of your 10,000 taste buds. It is outstanding beef that merits its reputation.

Since its beginning, the Great American has had a standard and very successful template. All meals include a huge baked potato (baked to perfection every time), pineapple coleslaw, ranch-style beans and a bolillo roll with seconds at your beck and call.

The pineapple coleslaw has a perfect blend of sweet, tart and savory tastes. The cabbage is unfailingly fresh and crisp while the sauce is creamy and absolutely delicious.

I used to think that the ranch-style beans (cowboy caviar) were very much reminiscent of the Lawry’s seasoned beans my Kim prepared for me before she learned about New Mexico style beans from my mom. I’ve since become a great fan, enjoying the unique seasoning more each visit.

For years, some patrons lamented the fact that the menu was devoid of salad of any kind. Jerry Wright may have staved off serving salad until he found one worthy of the restaurant’s high standards–and he’s done so.

The Great American salad starts with chopped iceberg lettuce which is then topped with red onion, croutons, tomato wedges and Wisconsin bleu cheese crumbles. A creamy and absolutely delicious Ranch dressing completes the salad. This may sound like a standard salad at some restaurants, but the difference is in the execution.

This salad is constructed with the freshest ingredients and the piece de resistance is the salad dressing which you’ll want to dredge up with the restaurant’s fresh, warm bolillo bread.

Great American was the favorite Albuquerque restaurant of my Chicago born and bred father-in-law who wanted his first Duke City meal at every visit to be at this northeast heights restaurant overlooking the city.

We’ve also had visitors from the Midwest (for whom fish fries are a ritual, if not a religion) swear that Great American’s beer-battered fried fish (which I believe is haddock) is every bit as good as the fried fish served in Wisconsin. I might not go quite that far, but I would say the tartar sauce is among the best I’ve ever had anywhere and the fish would indeed be very competitive in Wisconsin.

The Great American’s barbecue sauce is terrifically tangy but offered only on sausage and chicken, my two least favorite barbecued items. The sausage is a terrific kielbasa with a bite of its own; ameliorated by the sauce, it’s pure dynamite.

If you have room for it (a rarity), dessert is also a great treat. The rich and decadent chocolate ganache cake, served warm is a great way to end a meal.

The Great American Land and Cattle Company restaurants in El Paso and Anthony, Texas are owned and operated by Jerry’s stepbrother.

The Great American family of restaurants has its genesis in Roswell, New Mexico of all places. Back in 1971, the Wrights learned from a master chef the right way to prepare steak and run a restaurant with a format to which the restaurant has subscribed ever since: good food, good mood, good service and consistency.

Recipes are designed to balance the gratification of our five taste sensations: sweet, sour, salt, bitter/astringent and pungent. A line-up of award-winning wines are also available to enhance your dining experience. The Great American Steakhouse’s distinguished wine list is celebrated in well-attended thematic wine dinners in which fine wines are paired with victuals.

The same great cuts of steak and the fine wine served at the restaurant are available for take-out (as if you could really grill them nearly as well at home).

A sentimental reason we hold this restaurant close to our hearts is that this is where we finally met the charming, witty and beautiful Janet Resnik, dearly departed wife of my dear friend, colleague and fellow gourmand Bill. Like the restaurant, she was even better than advertised.