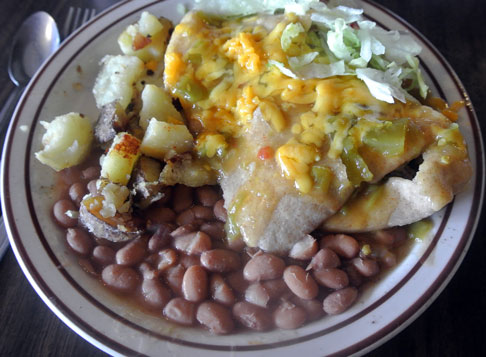 From Ortega’s Facebook Page: It has been our pleasure to serve Albuquerque and visitors for nearly 32 years . We want to thank you for supporting Ortega’s Restaurant for more than three decades  . We have enjoyed your company and made many friends over the years. On September 12, 2020, we will close our doors for the last time.

If you were raised in New Mexico thirty or more years ago, chances are you weren’t raised on the healthiest of diets. New Mexican food, while incomparably delicious, isn’t exactly a dietician’s dream. Even our beloved frijoles, the healthiest of carbohydrates, were prepared in lard…and many of our dishes which weren’t prepared with lard, had enough cheese to keep Wisconsin fiscally afloat. It’s no wonder the Land of Enchantment’s population is rife with caloric overachievers.

You’ll forgive those of us who survived such overindulgence to somehow reach middle age if we’re skeptical when a New Mexican restaurant boasts that “you don’t have to be health conscious – because we already are!” To support that contention, Ortega’s New Mexican Restaurant in Albuquerque:

Reading all of this, we’re even more skeptical of Ortega’s claim that “our food tastes as good as (if not better than) homemade.” Better than homemade? That an audacious, if not heretical, claim. The proof, as it’s long been said, is in the eating. A lot of Duke City diners have been eating at Ortega’s for the entirety of its twenty-seven years. For many of them, it truly is a home away from home. Yelp reviews are replete with four- and five-star ratings while 88 percent of Urbanspoon reviewers like it.

As Ortega’s approaches its third decade, this venerable restaurant is understandably showing some signs of age. The wall paneling is a bit dated and there’s a little wear and tear on the furniture, but that only adds to the restaurant’s charm. Besides, even if the ambiance is a bit of an anachronism, Ortega’s menu has more than kept up with the times. In fact, the menu at this beloved local favorite offers some items you probably won’t find at any other New Mexican restaurant in town.

While every New Mexican restaurant in town will gladly top your chile relleno with either red or green chile, to my knowledge, Ortega’s is the only restaurant which will stuff a roasted red chile, in-season, of course. Ortega’s will also stuff your sopaipillas or prepare your enchiladas with a barbecue quality brisket. Then there’s the Nachos Grande (fresh tostada chips topped with beans, seasoned beef and melted cheddar cheese along with guacamole, sour cream and pico de gallo) which were named among the Duke City’s best by Albuquerque the Magazine.

The tostada chips which form the base for those award-winning nachos are served with your complimentary first bowl of salsa. You’ll be charged a pittance for additional bowls. The salsa (tomatoes, garlic, onions, cilantro) is very good, albeit not especially piquant. It pairs very well with the large, thick, formidable chips which are only lightly salted. Should you order a la carte tacos, they come with a small ramekin of salsa, enough for any remaining chips you may have.

The Spanish rice and red chile (including carne adovada) are made with cumin. For those of us who would rather our chile not include this distinctively aromatic spice (trying to be nice here), it’s a great excuse to order Ortega’s green chile or to indulge in something sans chile. Fortunately there are many alternative options on a very interesting and inviting menu.

One of those alternatives is fajitas, marinated chicken tenders or beef strips served sizzling over a bed of sautéed onions and peppers and served with fresh guacamole, shredded cheese, sour cream and pico de gallo on the side along with four warm flour tortillas. The menu describes these fajitas as “que bueno” or “that’s good.” You’ll be echoing that sentiment. The beef strips are grilled to a tender consistency permeated by a pleasant smokiness. The onions are grilled to a pearlescent sheen and impart sweet notes that contrast the sharp cheese and richness of the sour cream. Add Ortega’s to the short list of New Mexican restaurants which serve very good fajitas.

Ortega’s stuffed sopaipillas can be tailored to your exacting tastes. You can have them stuffed with shredded beef, carne adovada, beef and beans, all beef or all chicken, carne adovada or brisket. That’s a lot of variety. Alas, if you order your sopaipillas stuffed with brisket, you’re likely to order it again and again. This is excellent brisket, maybe even barbecue-quality brisket. We all know brisket is one of the least tender (or toughest, if you prefer) cuts of beef, but it can be made tender. It’s worth the investment of time Ortega’s takes to braise (similar to a pot roast) a very tender, very delicious brisket. Top it with green chile and melted, shredded cheese and you’ve got a real winner. The accompanying whole beans and potatoes are also quite good.

If for no other reason than an additional portion of salsa, you should order an a la carte taco or six. So good, in fact, they don’t even need the salsa. Crispy hard-shelled corn tortillas are engorged with ground beef, lettuce, shredded cheese and chopped tomatoes. Clear out some of the excess lettuce and make room for the salsa, but not until you try it sans salsa so you can appreciate the nicely seasoned ground beef.

Ortega’s gives its guests the choice of having their whole wheat sopaipillas with their meal or afterwards as a dessert. They then prepare them to order. Regardless of when you choose to enjoy them, you’ll want to indulge while wisps of steam reach towards the heavens when you puncture the pillowy dough. The differences between whole wheat sopaipillas and traditional flour-shortening variety are discernible just as the differences between whole wheat bread and standard white bread are discernible. These sopaipillas are quite good, probably too good for the honey flavored syrup with which they’re served.

Ortega’s is the first New Mexican restaurant in which I truly enjoyed natillas, the custard-like dessert made from milk, sugar and eggs cooked together, whipped and chilled until the consistency becomes thick and creamy. There are two readily apparent qualities which distinguish Ortega’s natillas from the rest. The first is the “bowl” in which they’re served–a fried tortilla shell generously sprinkled with cinnamon. The second is the “egginess” of the dish, indicative of the whipped and separated egg yolks used to create this delicious dessert. The natillas are so rich, you wouldn’t mind sharing them.

Another hallmark of the Ortega’s dining experience is the convivial service. Servers are friendly and attentive, many of them on a first-name basis with regulars. The excellent service is a reflection of owner Rudy Ortega’s customer orientation. Rudy is a peripatetic presence at his restaurant and even when he’s not there, his staff will treat you very well.

Oh, and those “healthy” qualities Ortega’s touts, you probably won’t notice much of a difference as you’ll be too busy enjoying every morsel of your meal.