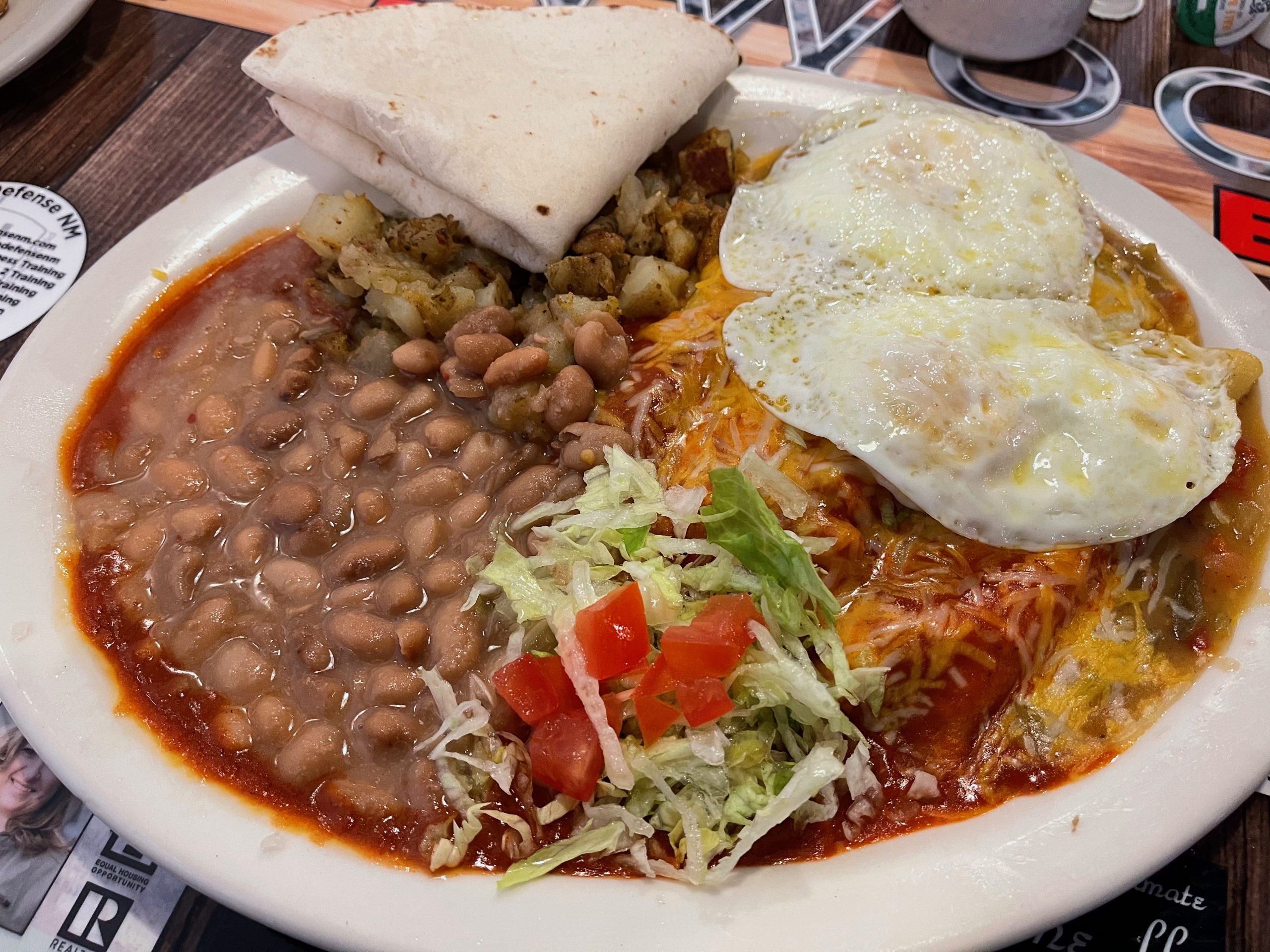 I’m not sure Matt Moody could sell milk to the lactose intolerant or ice to an eskimo, but it would be hard to bet against him. The genial owner of the Ironwood Kitchen on Albuquerque’s sprawling far northwest, Matt has a rare enthusiasm for both his restaurant and his recipes.  He won’t just describe a dish on the menu, he’ll tell you how it’s prepared and may even give you the genesis of its ingredients. That type of enthusiasm and confidence is infectious.

Matt is also wise and experienced enough to understand the customer is always right…even if he doesn’t agree with them.  When my friend Bill Resnik and I practically accused him of being a “Cuminista” for using cumin on his red chile, he listened to our diatribe then related his long history in having prepared that chile to much popular acclaim in the Mesilla Valley Kitchen restaurant in Las Cruces.  Despite the success of his chile recipe in the Las Cruces area, he researched the Duke City market, determined we’re quite a bit more finicky  about the purity of our chile and removed cumin from his recipe.  You’ve got to like a restaurateur who caters to the market.  There are a lot of things to like about the Ironwood Kitchen.

The Ironwood Kitchen, which opened in December, 2011, is situated on Unser Plaza within a few blocks of the demarcation line between Albuquerque and Rio Rancho just west of the new Presbyterian Healthcare Services hospital.  At more than 2,500 square feet and with an external facade resembling a slick chain restaurant (no insult intended), the restaurant is named for any of a large number of woods that have a reputation for hardness.  Hard woods are part and parcel of the restaurant’s rustic interior as is locally crafted ironwork.   Both booth and chair seating are available.

Open Monday through Saturday for breakfast, lunch and dinner with breakfast served all day long, this casual restaurant specializes in affordable and healthy American and New Mexican entrees.  Matt will tell you with obvious pride about the freshness of his restaurant’s ingredients, that meals are prepared to order and that nothing is frozen. Diners place their order at a counter and your order is promptly delivered to your table.  It’s at the counter where we first encountered the affable owner, but it wasn’t the last time we saw him.  He also visited our table at least twice to ensure we were enjoying our food.  He visited every other table, too.

The menu is scrawled on white boards behind the counter.  It’s not an overly ambitious menu if your definition for ambitious is tampering with tried and true recipes.  You won’t find ingredient combinations the kind of which the Food Network’s Iron Chefs introduce weekly.  It’s a menu with no major surprises, but one which should satisfy diners wanting comfort food favorites and breakfast all-day-long.  New Mexican favorites–huevos rancheros, breakfast burritos, green chile stew, carne adovada, quesadillas, enchiladas, tacos and more–are very well represented.  So are popular American food standards: chicken fried steak, burgers, sandwiches, French toast, pancakes and more.

22 April 2021: The enchilada plate features three rolled corn tortillas filled with cheese (also available with beef or chicken) topped with your choice of red or green (or both), melted cheese and a fried egg or two if you wish.  Ask for one of each–cheese, beef and chicken.  The ground beef is very well seasoned and griddled to a light crispiness.  The chicken is plentiful and it’s cut to right-sized pieces.  The fried egg is prepared to your exacting specifications such as “over easy” where unctuous yellow yolk runs over the other ingredients when you press your fork into it.  The corn tortillas have the flavor of fresh corn, not the oil in which they’re fried.  The enchiladas are served with home-fried spuds and beans, both of which are quite good.    Both red and green chile are fairly mild, but have a nice flavor.

22 April 2021: Chips and salsa have become so de rigueur in New Mexico that we take for granted they’ll always be good.  So, when an order of chips and salsa stands out–even if it’s just a little different or a little better than others–we tend to notice it.  One of the aspects of Ironwood’s chips and salsa that make it noteworthy is that the yellow corn chips are served toasty warm.  They’re just thick enough to hold up against the weight of Gil-sized scoops (no dipping for me).  The salsa is jalapeño-based with a pleasant piquancy and freshness that makes you think “just made.”

22 April 2021: The concept of breakfast for dinner has really caught on across the fruited plain, so much so that all-day-breakfast restaurants and food trucks have become fairly common in some metropolitan areas.  With breakfast, lunch and dinner served all day long, the Ironwood Cafe offers the best of all worlds.   Half the menu is dedicated to breakfast.  On the rare occasion when New Mexicans eschew breakfast burritos and other dishes without chile, it’s comforting to know French toast (two slices of thick-cut Texas toast dipped in egg batter and grilled up to golden brown) are available. Though they’re not exactly “thick-cut,” they are quite good.  Sprinkled with powdered sugar and served with warm syrup, they’ll certainly remind you why breakfast at any time of day is always a good idea.

Perhaps because of its proximity to the popular chain burger restaurant, the Ironwood Kitchen’s burger offering is cleverly named The Sixth Guy Burger.  The beef is obtained from a local butcher who grinds out a 100 percent chuck to Matt’s specifications.  Each patty is hand-formed then is both charbroiled and griddled, a technique which seems to bring out the beef’s moistness and flavors.  The beef is set on a fresh-baked Kaiser roll and served with lettuce, tomatoes, onions and pickles.  Optional toppings–you have your choice of two of them gratis–include avocado, cheese, bacon, mushrooms, green chile and green onions.  This is a better burger than you’ll find at the Five Guys Burger joint just north of the Ironwood Grill and I’m not just saying that because I dislike chains.  The housemade French fries are excellent!

9 July 2013: Michael Schlow, a prominent Boston chef calls quesadillas “the ultimate snack,” explaining “they’re fast, they’re crispy, they’re gooey. They can be so many things. They’re just a great vehicle for flavor.”  He forgot to add “they’re addictive.”  The Ironwood Kitchen’s smoked turkey quesadilla (two large tortillas filled with grilled smoked turkey breast, sautéed green chile, mushrooms and diced onions and of course, melted cheese may be the very best quesadilla in Albuquerque’s burgeoning west side.  Unlike sandwiches which are often best when overstuffed, this quesadilla is right-sized with a perfect balance of turkey with a nice hint of smokiness and earthy mushrooms.  Add a little salsa to the sauteed green chile and you’ll embolden an already great quesadilla even more.

18 July 2013: In its annual food and wine issue for 2013, Albuquerque The Magazine awarded the Ironwood Kitchen a hot plate award for its Frito pie.  Hot Plate awards are accorded annually to some of the city’s most delicious dishes as seen by the magazine’s editors and staff.  The magazine noted that the Frito pie isn’t even on the menu, but savvy diners know well to request it anyway.  If they don’t know, they’ll figure it out when they espy the Hot Plate award on the order counter.

For years, my benchmark for outstanding Frito pies has been the nonpareil Frito pie made with carne adovada at  Perea’s Tijuana Bar and Restaurant in Corrales.  Any Frito pie would have to be amazing to be spoken of in the same sentence as Perea’s.  The Ironwood Kitchen’s Frito pie belongs in the same conversation.  It’s worthy of its fame and accolades.  This is no appetizer sized Frito pie.  In fact, big eaters will be challenged to finish it all as my friend Paul Lilly and I found out.

22 April 2021: In the 1994 movie Quiz Show, one of the main characters educates his dining companion on the origin of the Reuben sandwich.  “The Reuben sandwich is the only entirely invented sandwich, having been invented only two years prior by a man named Reuben Kay at a poker game in Nebraska.”  There are nearly as many origin stories about the Reuben as there are creation myths describing the beginnings of our existence.  We didn’t reflect on any of them when we ordered Ironwood Cafe’s reuben (light rye bread, corned beef, sauerkraut, Swiss cheese, and Russian dressing.  Though it’s not quite skyscraper high the way we enjoy our Reuben, it’s quite good.  Especially notable is the delightful interplay between the Russian dressing and the sauerkraut, both meshing together to perform a beautiful duet on your taste buds.

The best Frito pies are than just the sum of their components coming together to form an outstanding whole.  The best Frito pies integrate ingredients so well, it’s as if they’re not constructed, but “born” that way, if you will.  That’s what the Ironwood Kitchen’s Frito pie is–a wonderful composite of Fritos topped with ground beef, pinto beans, red chile lettuce, chopped tomatoes and red onions if you’d like.  The red chile, now sans cumin, is  a star.  It’s what makes this Frito pie an award-winner, but you’ll also appreciate the balance of flavors and ingredients.  The whole beans are terrific.

18 July 2021: Save room for the chocolate brownies which are thick, luscious and chocolatey.  A triangular wedge of adult chocolate about an inch thick will sate even the most staunch of chocoholics.  Moist on the inside with just a slight crispy bark on the edges, the brownie is just one of several housemade pastries offered at the Ironwood Kitchen. The cinnamon rolls are becoming legendary and might soon compete for another Hot Plate award.

In its annual Food and Wine issue for 2013, Albuquerque The Magazine‘s staff sampled “every dish of nachos in the city” and selected Ironwood Kitchen’s nachos as the seventh best in the city.  The magazine described these nachos as “made from scratch, skipping the pre-bagged, pre-frozen and canned foods, opting instead for preservative-free fresh stuff.”

The burgeoning far west area near where Albuquerque and Rio Rancho meet is growing rapidly and so will the number of visitors dining at the Ironwood Kitchen.