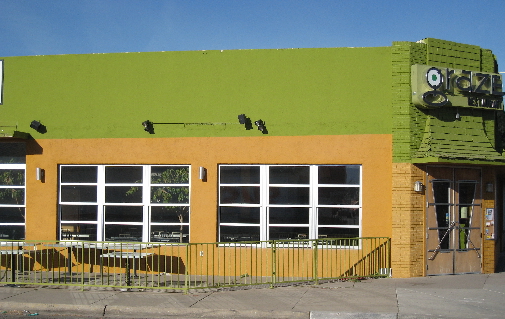 When uncredentialed food critics (like me) sing the praises of a restaurant, their fulsome rants might not garner much notice, but when professional chefs and critics are unabashedly effusive about that same restaurant, you’d be well advised to listen.

Graze, launched in December, 2002 by chef luminary Jennifer James, has had all the cognoscenti waxing poetic. La Cocinita magazine’s best chef award winner for 2002, James has been all but beatified, so prolific is her reputation. Renown for melding seemingly disparate ingredients into concordant meals, she is as much an artist as a chef.

Note: In September, 2006, Jennifer James ended her affiliation with Graze, leaving it in the hands of her business partner Michael Chesley. On January 27, 2007, Graze closed for good.

Appropriately named, Graze specializes in tapas, Spanish appetizers that can also form an entire meal when several are ordered together. Tapas dishes are generally quite small and can be both simple or elaborate. Even though I understood that dining concept, I didn’t quite “get it” during our inaugural visit accustomed as I am to the huge portions served at most restaurants.

We lamented the short-lived pate grand-mere with cornichons (sour crisp pickles made from tiny gherkin cucumbers), grainy mustard and walnut bread and bemoaned the tantalizing tease that was a perfectly seasoned satay.

We mourned after consuming the last essence of grilled tournedos of beef, potato gratin with arugula, pepper jus and crispy peppers and we paid loving tribute to a plate of orange-tequila braised pork ribs with smashed potatoes and greens garnished with roasted peanuts.

Every nibble was a pleasurable dining adventure for each of our 10,000 rapt taste buds, but the transitory gratification was somehow superceded by the sense of loss we felt as each morsel on each plate had been lustily consumed.

During our second visit, rather than fret because each plate left us wanting more, we relished the opportunity to once again try several tapas and in ordering plates that provided complementary taste contrasts. That second visit took place during the second week in which Graze featured a Sunday brunch to go along with its seasonal menu. A better brunch we’ve never had in Albuquerque.

We slathered unsalted apricot and cherry butter on fluffy biscuits then topped them with generous amounts of mango preserves, an indulgence in consonant excellence.

Seared Hawaiian sunfish with a spicy peanut-lime sauce was the coup de grace. The lightly breaded, flaky white fish filet was a fabulous fish–not too “fishy” tasting and ameliorated, not dominated by the spicy, citrus sauce. It’s the type of filet of which you’d never tire.

I could expend several pages feebly trying to describe other plates we had during subsequent visits, but words fall woefully short of describing just how wonderful the Graze experience is. I can try to describe the ancho BBQ spare ribs and tell you about the lacquered BBQ sauce the color of orange marmalade that glazes the tender, meaty ribs…or wax poetic about housemade desserts (such as the refreshing key lime and red chile ice cream), but really, you’ve got to try them to really understand.

It’s readily apparent from her almost preternatural melding of ingredients that Jennifer James has a vivid imagination and the creativity to translate that imagination into plates of utter deliciousness. It also appears her creativity extends beyond the kitchen. Some of the ads she ran on the Alibi might be considered blasphemous, prompting the wickedly brilliant Albuquerque blogger Pika Brittlebush to proclaim on the Duke City Fix that Jennifer James is going to hell.