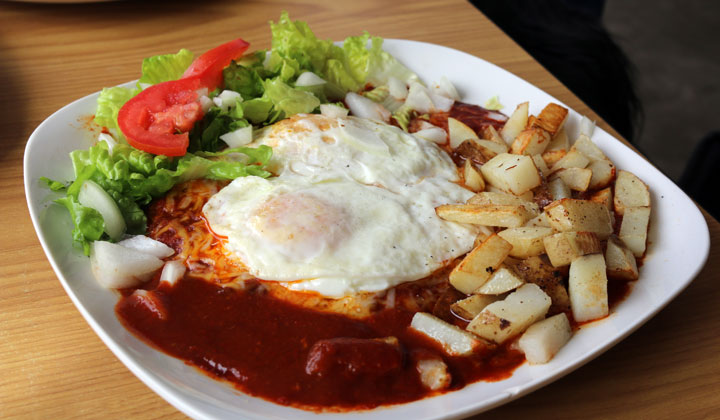 “To anyone else,” my Kim joked “the name Café Laurel is just a cute name probably chosen because the owners like laurel leaves. To you the name has to mean something.” She reminded me of the hours I spent dissecting former President Bill Clinton’s statement “It depends upon what the meaning of the word “is” is.” “You’re too literal. You don’t just want to know what words mean. You need to know why they’re used.” “But,” I retorted “laurel leaves aren’t just a leafy plant. Julius Caesar and Napoleon Bonaparte fashioned “crowns” out of laurel leaves, probably,” I surmised “because laurel leaves were more comfortable than the heavy, bejeweled metallic crowns that may have been the reason for the adage “uneasy lies the head that wears the crown.” She rolled her eyes.

“Sure,” I argued “the owners of Café Laurel may have had nothing more in mind when naming their restaurant than they liked the laurel plant, but the implication of the name Laurel means a lot more.” “How did you arrive at that conclusion,” she asked. I explained that “in ancient Greece and Rome, laurel leaves were used to fashion wreaths that were presented to those achieving the highest levels of success, such as winning an event at the ancient Olympics.” I added that “the Bible imputes such traits as fame, success and prosperity to the laurel. So, the implication is that this is a restaurant which has earned victories and honor in the culinary field.” She ended our discussion with “ask a stupid question...”

If you’re wondering why my long-suffering Kim puts up with such a literal guy, it’s probably because I take her to restaurants such as Cafe Laurel–restaurants which really do earn accolades and plaudits. She can put up with my etymological analysis because when it comes down to it, she enjoys a date night every time we go out (or so she tells me). In any regard, Café Laurel’s exterior signage facing Central Avenue, is festooned with painted laurel leaves directly below the restaurant’s name. Inside, the restaurant is awash in greenery—hanging and potted plants everywhere you turn. It makes black-thumbed people like me green with envy that others can coax plants to grow so lushly. Talking to our plants at home has never worked for me, probably because as my Kim reminds me “they don’t understand your big words either.”

In May, 2018, Café Laurel will celebrate its third anniversary of serving the neighborhoods sandwiched between Old Town and Downtown on historic Route 66. Its pedigree, however, goes back quite a bit further than those three years. So do several items on the menu. If Café Laurel inspires a little déjà vu, it could be because some of the dishes—and certainly the hospitality—are reminiscent of Christopher’s, a beloved Old Town institution co-owner Ken Faber’s mom ran for nearly two decades in the 1970s and ‘80s. Ken owns and operates Café Laurel with his lovely bride Debi. Ken’s 28-year career in corporate chains serves him well on busy days when orders come in like a fusillade of shots. Debi runs the front of the house. Both are very friendly and accommodating.

For the versatile among us who enjoy breakfast items for lunch and burgers for breakfast, Café Laurel is a dream come true. You can order anything on the menu any time of day. Sadly this means 8AM to 3PM Tuesday through Friday and 9AM to 2PM on Saturday and Sunday. The menu isn’t especially large, but it offers good variety of mostly American and New Mexican favorites. You may want to get there early or you might miss out on the daily quiche or daily special. Breakfast favorites include omelets, huevos rancheros, burritos and crepes. Warm sandwiches—served with your choice of macaroni salad (curry-based), Greek salad or chips—include several standards and others which should be. Meatless enchiladas, vegetarian sandwich and a number of salads are available. Sweets and treats seem to go quickly.

When my friend and frequent lunch companion Bill Resnik invited me to Café Laurel, he didn’t extol the variety of the menu. Bill is a pretty monogamous guy. When he finds something he loves (such as his beautiful bride Tish), he sticks with it. During his own inaugural visit to Café Laurel, he fell in love with the green chile cheeseburger (listed on the menu as “burger”; make sure to ask for the green chile). This is a behemoth between buns: two Angus beef patties prepared to your exacting specifications (medium rare if you want the optimum in juiciness), lettuce, tomato and red onion on a grilled roll with mustard and ketchup on the side. Every burger should be this good! The green chile has both the roasted flavor and piquancy aficionados demand. The two Angus patties protrude beyond the confines of the buns. Every ingredient (even the tomatoes) is fresh. The grilled roll is formidable enough to contain all the juiciness though it’s a definite four- or five-napkin affair.

So impressed was I by the green chile cheeseburger that a return visit was quickly imminent. My Kim and our debonair dachshund The Dude had to experience Café Laurel, too. As we were to learn during our ninety minutes at the restaurant, this is a favorite restaurant for four-legged children. Because Café Laurel doesn’t have any appetizers per se, we gravitated toward the salads section of the menu. We were relieved for a change to find these are the salads of yore, not the seemingly de rigueur newfangled salads with their candied pistachios, dried cranberries and vinaigrette du jour. We hadn’t had a chicken salad salad in a long time and Café Laurel’s version beckoned. A meant to be shared plate of white meat chicken, celery, chopped pecans, Cheddar cheese, Mandarin oranges, tomato, cucumber, hard-boiled eggs on greens was picture perfect, impeccably fresh and delicious. The way it was designed on the plate actually resembled three salads. Instead of being jumbled together, ingredients were splayed neatly in three sections of the plate: right, left and center. That’s the way we ate the salad.

In a recent comment posted by Sarita, a good friend of this blog (and someone with whom I hope to someday have the honor of breaking bread…or tortillas, pita, lavosh, etc), she highly recommended several items on the menu, lavishly praising the roast beef (not thinly sliced…very tender). She recommended the Toasted RB (roast beef, Cheddar, green chile and mayo on a grilled roll). Not in a green chile mood, my Kim opted instead for the cleverly named Adobe Brick, a brick-sized sandwich she would later praise as “one of the best sandwiches I’ve had in Albuquerque.” So what’s in an Adobe Brick? Picture thickly sliced, tender roast beef; sour cream, Provolone, grilled mushrooms and red onions on grilled sourdough. This is truly a sandwich for which all ingredients work in multi-part harmony. From the umami of the sour cream and mushrooms to the mellow mildness of the Provolone, this sandwich will enrapt your taste buds. Sourdough is the perfect canvas for a sandwich that needs absolutely nothing else.

You might not think a restaurant named “Café Laurel” would prepare some of the very best red chile in town, but it does! It’s not the most piquant or earthy red chile you’ll find, but more than most red chiles, it’s got a deep, rich flavor profile that will remind you that chile is technically a fruit. No, it’s not overly sweet, but it’s got sweet, mellow notes and a deep roasted flavor. That wondrous red chile crowned my plate of enchiladas (layered flat corn tortillas with chile and Cheddar and a garnish of chopped tomatoes and lettuce) with a flour tortilla and papitas on the side. The pool of yellow yoke mingling with the red chile is enjoyable from the perspective of both esthetics and deliciousness. The flour tortilla, of course, is essential because it forms “New Mexican spoons” where you fold bite-sized bits of the tortilla into a repository into which you can spoon in the other elements of this enchanting enchilada. It’s a meatless enchilada, the type of which Catholics will appreciate during Lenten Fridays.

On every table at Cafe Laurel, you’ll espy handmade snail-mail ready postcards which you’re invited to fill out and send to a friend. Cafe Laurel will even mail them for you and in exchange for completing a postcard, you’ll get a free beverage card. Being the over-analytical type, I was stumped by the Twitter-like hashtag “meetmeatlaurel” referenced on the postcards. Why, I wondered, would Cafe Laurel use a hashtag extolling its meat (meet meat). Sure their burgers and sandwiches use high quality meat, but… It took Kim about one second to figure out the hashtag actually read “meet me at Laurel.” Some genius I am, huh?

Cafe Laurel was a “Best of the City” winner in Albuquerque The Magazine’s annual readers’ poll for 2016. It continues to earn its laurels and shows no sign of resting on those laurels. With its legacy and people-pleasing proprietors, it’s a restaurant that should be great for a long time.