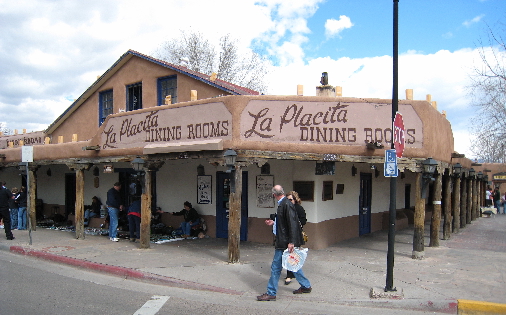 For convenience, if not for fiery New Mexico authenticity, you can’t beat La Placita, a yawning restaurant housed in the historic Casa de Armijo hacienda on Old Town Plaza. The Casa de Armijo was built in 1706 and occupied for many generations by the prominent Armijo family. Over the course of its three hundred year existence, the three foot thick adobe walled structure also served as a fort and a refuge before housing Armijo’s mercantile store in which gentlemen’s linen underwear could be purchased for $1 and dainty ladies’ lace gloves sold for 10 cents a pair.

The Casa de Armijo was restored to its present condition in 1930 when it was remodeled in conformity to its venerable character. Serving as the La Placita dining Rooms since 1931, it is one of the oldest continuous serving restaurants in New Mexico. Today, the sprawling edifice houses several dining rooms, each replete with excellent examples of Southwestern art. La Placita also plays host to interesting paranormal phenomena.

In the foyer is a magnificent staircase imported from Spain by the family patriarch for his daughter’s wedding in 1872. The daughter’s wedding dress had a 30-foot train which must have draped from top to bottom of the staircase as she wed at the staircase’s foot. The hacienda’s center courtyard, long since enclosed, includes an ancient cottonwood tree still living in the center of the room. It’s just one of the many things about La Placita Dining Rooms that leaves tourists agape. In fact, for people watching, there are few spots in town as good as La Placita. Native Americans ply their turquoise and silver wares on the restaurant’s covered portal to the delight of passers-by.

In the early 1980s, La Placita Dining Rooms was embroiled in a controversy of sorts when it lobbied successfully to obtain a liquor license and dispense alcohol in close proximity to Old Town’s San Felipe De Neri church. Today that controversy is a memory of the past with margaritas and other adult libations flowing freely. Years later, Old Town neighbor the “Candy Lady” shop was involved in a similarly contentious dispute with the church over the Candy Lady’s sale of risqué “for adults only” candy.

The menu includes all the New Mexican standards as well as some American food favorites. Fajitas (a Texas creation) are a popular choice and one that prompts copious head-turning as the wait staff parades them sizzling hot to a diner’s table. La Placita’s salsa is cilantro laced and watery, making it difficult for the chips to stay onboard. Most New Mexicans would consider it “anglicized” as in not at all piquant. It has the bite of Chef Boyardee tomato sauce.

Not everything at La Placita caters to touristy tastes. In fact, I don’t know of many New Mexicans who bring out-of-towners to this Old Town restaurant, but many tourists do find it on their own. (It might do New Mexicans a world of good to see Old Town through the eyes of bewildered tourists so that we can be reminded of how good we truly have it.) Fortunately both the red and green chile are quite a bit more incendiary than the salsa, not that either will give Sadie’s a run for its money in terms of degree of heat. The red chile is usually more piquant than the green, but for the best possible combination, order your meal “Christmas style” (both red and green chile).

My favorite entree is the breakfast burrito called Los Caballeros served all day long. Nearly a foot long and more than an inch thick, a finely formed tortilla envelops the usual breakfast burrito eggs, but La Placita changes things up a bit with cubed, roasted potatoes and bacon strips instead of the typical hash browns and bacon bits. With a nicely flavored Christmas style chile, it makes for an excellent meal.

Another popular breakfast (or anytime) treat is El Jefe, two eggs (any style), two grilled pork chops and fried potatoes. El Jefe, generally a term of endearment which can be used to mean “the man,” “the boss” or “the father” is an appropriate term for this breakfast, especially “the boss.” That’s because everything on this plate is generally delicious, prepared to your exacting specifications. The fried potatoes are cubed and fried to a crispy, golden sheen. The bone-in pork chops are thin with grill marks that leave testament to their preparation style; they are delicious. Prodigious portions are commonplace at La Placita. It’s a wonder any tourist has the energy to walk around after a hefty meal.

La Placita Original Old Town Special, for example, is a prodigious plate of two stuffed sopaipillas. One is stuffed with beef and pinto beans and the other with chicken and pinto beans. Both are topped with melted cheese and your choice of red or green chile (ask for both). This is a lunch or dinner entree that can easily be shared by two with room left over. You definitely want room left over for the restaurant’s sopaipillas. These puffy deep-fried treats are wonderful, especially if served piping hot. It’s amusing to see tourists trying to figure out what to do with (or pronounce) sopaipillas. Fortunately an accommodating wait staff is on hand to lend a hand. It’s not unusual to see additional orders placed for this uniquely wonderful New Mexico pastry treat.

Other dessert options (if you have room) include natillas and a flan that is reputed to be among the very best in the city. Rare is the diner who can finish an entire meal and still have room for dessert. Rarer still is someone who won’t find at least one thing to enjoy about La Placita Dining Rooms, an Albuquerque and New Mexico landmark.