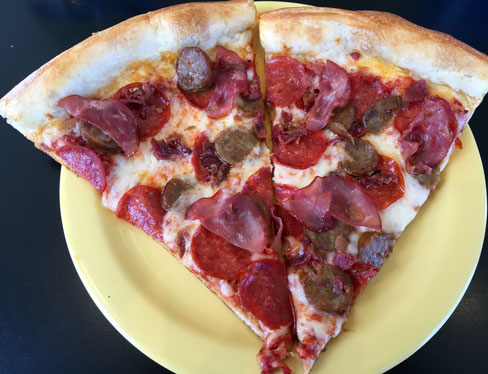 For more than two years, Dan Brown’s brilliant and controversial novel, The DaVinci Code was a permanent fixture as number one on the New York Times best seller list. Brown’s magnus opus postulates the existence of a clandestine society in Europe which, for centuries, has been the guardian of a hallowed bloodline whose lineage descended from Jesus Christ and Mary Magdalene. This secret society included such luminaries as Leonardo DaVinci, Isaac Newton and Galileo Galilei. While many people may consider this terrific tome heretical, at its very least the DaVinci Code spawned a renaissance (rebirth of learning) in the Renaissance (period of European history between the 14th and 17th centuries when a cultural rebirth occurred).

In 2005, renaissance man (a man with extraordinarily broad and comprehensive knowledge) John Mickey launched DaVinci’s Gourmet Pizza in Albuquerque’s far Northeast Heights and his brainchild is spawning a renaissance (rebirth again) of its own among pizza enthusiasts–so much so that it was named the best new restaurant in the Alibi‘s 2005 Readers Choice issue. What makes this accolade doubly impressive is that his restaurant was tucked away for its first eight years in operation in the Shops at Mountain Run and until 2009, was available only for carry-out and delivery.

In 2014, DaVinci’s Gourmet Pizza moved to a more centrally located location in Altura Park a few blocks north of the University of New Mexico. Now situated in a repurposed auto repair shop/gas station, DaVinci’s has classed-up the area’s pizza availability with dine-in, carry-out and delivery of a diverse and expansive menu. Even better, the restaurant is now open for breakfast, lunch and dinner with much more than pizza. Breakfast offerings, for example, include two breakfast calzones as well as a number of breakfast pizzas and a coffee-espresso menu designed to help get you started on a sleepy morning.

Though the name DaVinci’s Gourmet Pizza is no longer subtitled “where every pizza is a work of art” the menu still lists its pizzas under the categories “The Masterpieces” and “Premium Masterpieces.” All but two pizzas (the Hawaiian and the Green Chile Bacon Cheeseburger) are named for a famous artist of the Renaissance era, some contemporaneous with the eponymous Leonardo himself.

Children of the 90s who have come to associate the names Michelangelo, Raphael, Donatello and Leonardo with anthropomorphic turtle brothers who live in the sewers of New York City might not know that these names gracing pizzas are named for artists, but they’ll certainly consider each pizza a work of edible art. Pizzas are available in small (12″), medium (14″), large (16″) and colossal (18″) sizes and can be created on a canvas of either white or wheat crust. Meat and veggie toppings are available for build-your-own pizzas. You can also order pizza by the slice.

We learned that DaVinci’s Gourmet Pizza is like a breath of fresh air, so uniquely different in concept and execution that it should continue to be more than competitive in a glutted carry-out and delivery pizza market currently defined by mediocre national chains. Visiting DaVinci’s will also affirm that four walls and a hovering wait staff don’t define a great dining experience; we’ve enjoyed our pizza at a nearby park where we took in the sights of romping dogs, playing children and nature’s finery. We’ve enjoyed it in one of the restaurant’s several tables.

Gourmet pizza isn’t a stereotypical, haphazardly thrown together menagerie of fru-fru ingredients, it’s the culinary arrangement of top quality sauces, seasonings, cheeses, meats and toppings that work harmoniously to craft a delicious pie. DaVinci’s Gourmet Pizza offers 43 different toppings, some of which aren’t used anywhere else in Albuquerque. The Botticelli, for example, includes rosemary roasted potatoes. Best of all, the inventive array of DaVinci’s creations are fashioned on a crispy New York style canvas substantial enough to hold hefty portions.

Owner John Mickey is justifiably proud of his pies which are meticulously monitored so they’re extricated from the oven at the precise time to ensure just the right amount of char and optimum doneness of ingredients. Mickey trains his staff to be attentive to each pie. He wants a remarkable consistency in each pizza. A perfectionist with a keen attention to detail, he spent more than two months experimenting until he crafted the perfect whole wheat crust. He’s added a gluten-free crust, too, but it’s currently available only in the 12-inch size.

Gourmet pizza also isn’t necessarily crafted on a canvas of dough topped with tomato sauce. In Connecticut and other Northeastern states, the traditional white pizza (pizza bianca) generally has no sauce, just a covering of mozzarella cheese on top of garlic, olive oil and herbs with whatever other toppings a pizzaioli might add. DaVinci’s Gourmet Pizza is introducing Albuquerque to pizza sans tomato sauce and while not a new experience for us, might be a revelation for some Duke City diners so accustomed to plebian tomato sauce based pizzas.

4 July 2010: The aforementioned Alberti easily lives up to its “masterpiece” billing with standard ingredients that work together exceptionally well and made the additives we requested more than welcome. The standard Alberti features Fontina and mozzarella cheeses, roasted garlic, mushrooms, fresh tomatoes, goat cheese, parsley and Kalamata olives on an olive oil base to which we have added Canadian bacon and Italian sausage. This jazzy, grease-free pizza with its exceedingly fresh and ingeniously non-traditional toppings and olive oil blessed crust is fabulous in every respect. The marriage of Fontina and goat cheeses is particularly memorable.

4 July 2010: The Boticelli is yet another example of John Mickey’s creativity. The description–marinated chicken on a bed of rosemary roasted potatoes, red onions, covered with a blend of mozzarella and Kasseri cheese over an olive oil base–sounds at first browse, as one dry pie. Rosemary roasted potatoes and marinated chicken baked in a slate oven can’t possibly be moist, right? Far from it. This is a moist, cheesy pizza with right-sized ingredients baked for the optimum time to ensure a delicious pie with nary a hint of desiccation.

4 July 2010: Save for bread knots and chicken bites, DaVinci’s doesn’t have traditional “appetizers” but you can start off your meal with one of three artisan salads or bread knots. The Veronese salad (green leaf lettuce tossed with garbanzo beans, diced red pepper, Kasseri cheese, Genoa salami and red onions served with your choice of Ranch, Bleu Cheese or Italian dressing) is fresh and delicious, an excellent starter. A small salad is big enough for two to share. DaVinci’s has two dessert offerings, cannoli and tiramisu, neither of which are homemade, but both of which are highly recommended by the owner.

10 July 2015: DaVinci’s breakfast calzones are a unique offering whose time has definitely come. Though not named for any Renaissance artist, the breakfast calzone (eggs, bacon or sausage, Cheddar, onion and red or green chile) is itself a masterpiece, one reminiscent of New Mexico’s ubiquitous breakfast burrito, albeit on a different canvas. There’s only one thing which can improve this calzone and that would be offering a ‘smothered” option so you have chile inside the calzone as well as topping it. The chile isn’t especially piquant, but that’s the case in many breakfast burritos, too.

For most Duke City diners, a non-rush hour drive to DaVinci’s Gourmet Pizza is closer than it used to be. It’s a drive savvy diners should take often.