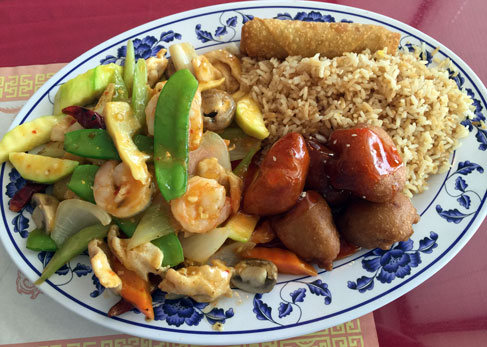 The Claw: Actually the only girl we want is Princess Ingrid.
Maxwell Smart: Then why did you abduct the others?
The Claw: Unfortunately, Mr. Smart, all Americans look alike to us.
~Get Smart

Leave it to iconic filmmaker Mel Brooks to turn cultural stereotypes around to create a hilarious interchange between The Claw, the head of the Asian arm of the criminal spy agency KAOS, and Smart, the bumbling American secret agent who fights on behalf of the forces of goodness and niceness. Many of us who followed Twitter commentary after the United Sates Women’s National Soccer team played to a draw against North Korea shrank with embarrassment at comments which evinced the fact that there are still people who subscribe to ill-founded stereotype that all Asians look alike.

If there’s a more innocuous and less offensive concession that can be made, it’s that most Chinese restaurants in Albuquerque do look alike in much the same way so many “red sauce” Italian restaurants of the 1960s looked alike. That’s a point even the most politically correct among us will concede. You’ll arrive at that conclusion about Chinese restaurants if ever you’re driving the city streets looking for a new place to eat. Ensconced within a significant number of strip malls throughout the Duke City are Chinese restaurants which almost seem to subscribe to a template of “sameness” when it comes to look, feel and even name. That “sameness” is also pervasive within the restaurant’s interior.

Not surprisingly even the menus have a very familiar uniformity down to the little chili icons next to specific items to denote levels of spiciness. Save for the amazingly low prices, surprises on a typical Chinese restaurant menu are very rare. One of the reasons for this “standardization” is because American guests are likely to be familiar with menu items which have been designed for American tastes, the so-called “Americanized” Chinese food.

The Daily Meal, an online resource which purports to produces more culinary content than any other resource recently published a feature entitled “Chinese Food You Won’t Find in China.” The list was replete with many popular favorites you’ll find at virtually every Chinese restaurant in America: General Tso’s Chicken, Crab Rangoon, Fortune Cookies, Chop Suey, Sweet and Sour Pork, Egg Foo Yong, Orange Beef and even Egg Drop Soup. Many of these dishes were, in fact, invented in the United States.

Comments on Zomato have two common themes–huge portions and great food. Reviewers were poetic about this humble Chinese restaurant: “tastes like everything is made from scratch,” “food always taste great got good flavor,” “food is very good, and usually more than you can eat,” “Best Anywhere” and “sized to feed a whole family with only one plate and it tastes soooo good” Is it no wonder my expectations were high.

Perusing the menu confirms the items listed on The Daily Meal’s “Chinese Food You Won’t Find in China” are prominently featured at China City. The lunch menu occupies the left side of the menu, listing some 32 entrees, all of which are accompanied by egg flower soup, an egg roll and fried rice. For a pittance more you can opt instead for hot and sour soup or wonton soup, but even with this substitution, there’s nothing on the lunch menu north of eight dollars. The dinner menu features some 21 combination plates with the aforementioned accompaniment. All dinner combos are priced at under ten dollars. While most Duke City Chinese restaurants tend to offer egg drop soup, China City serves egg flower soup. Similar in taste, these two soups differ in presentation. Egg drop soup is made by “dropping” the whisked eggs very slowly into to boiling stock and stirring rapidly in one direction. The result is thin, wispy strands of silken egg. Alternatively, egg flower soup is made by plopping spoonfuls of whisked egg into the soup instead of drizzling the egg; ergo the egg “flower” effect. Technique not withstanding, this is an excellent soup, maybe the best in the Duke City. It’s served steaming hot and needs absolutely no amelioration though a bit of pepper does infuse it with even more personality.

A word of caution–should you order one of the dinner combination plates, it may be more than any one person can finish. The plate is brimming with food piled high and spread wide. Among the more interesting (and it doesn’t appear on The Daily Meal’s list) entrees is the spice chicken with shrimp, a dish almost as generous with pork and shrimp as it is with al dente vegetables (snow peas, carrots, celery, onion, mushrooms, corn and zucchini) on a spicy, garlicky sauce. It’s a very good dish deserving of better than being paired with a rather disappointing (but fairly typical) sweet and sour pork. Some five or six porcine nuggets somewhat heavily sheathed in batter are served on a pool of sweet and sour sauce, emphasis on the sweet. The fried rice is a bit on the insipid side while the egg roll is on par with most.

China City has no pretensions to serving unique gourmet Chinese food. It’s a restaurant which has garnered a loyal following by serving large portions of familiar and well prepared Chinese food favorites in profligate portions. It’s no wonder so many Duke City diners love to visit China City.