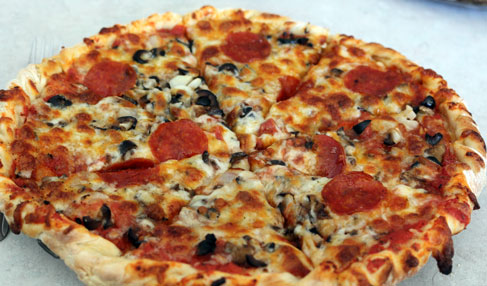 Each of the lunch ladies at the Peñasco Elementary School cafeteria undoubtedly earned a pair of wings, a harp, and a halo for all they were subjected to from the recalcitrant kids who lined up for our daily gruel. Whenever (and it was quite often) something unappetizing was served, we would burst into a chorus of “double, double, toil and trouble. Dump this slop on the double.” Most of us were six or seven years old and had certainly never heard of the three witches immortalized in the Shakespearean tragedy Macbeth. We’d improvised the little ditty from something we’d heard on an episode of Bewitched (or was it Gilligan’s Island?), a situation comedy of the 1960s.

It wasn’t those sainted lunch ladies who first came to mind when I espied the sign for “Witches Brew,” a coffee house in the Altura Park neighborhood. Now much more geriatrically advanced (and ostensibly more “grown up”) I tried to recall the remarkably precise and detailed incantation (was it “eye of newt, toe of frog, wool of bat, tongue of dog?”…) uttered by Macbeth’s three witches as they concocted the most famous witches brew of all. Alas, my mind was too cluttered with the “dump this slop on the double” chant of my childhood.

Fittingly Witch’s Brew occupies the space previously held by another mythical character, the long defunct Blue Dragon, a coffee house and eatery whose eight year absence has made Duke City hearts grow fonder. As with its predecessor on Girard, Witch’s Brew is quirky and comfortable, a homey milieu in which you can procure enchanting eats and bewitching coffee. The dining room is an upgrade, offering cozy booths that seem tailor-made for long visits as you luxuriate over a pizza or sandwich. The cynosure of another expansive room is a pool table. Walls are festooned with the works of local virtuosos plying their craft in various artsy mediums.

Esthetics and ambiance aside, what sets Witch’s Brew apart is its vibe, the sense of déjà vu and belonging you feel when you first step into the joint. Even if you never set foot in the Blue Dragon, there’s something more than vaguely familiar about Witch’s Brew. For the more seasoned among us, perhaps it’s the sense of nostalgia gleaned from having studied assiduously in similar venues even as live music or a poetry slam unfolded (sometimes rather loudly) in the background.

If you need help getting started in the morning, the Witch’s Brew can hook you up with hot Red Rock Roasters coffee or an 18-hour cold-brewed coffee as well as an assortment of eye-opening breakfast sandwiches and pastries. Return for lunch and you’ll revel in a selection of pizzas baked in the same Baker’s Pride oven once used by the Blue Dragon. The menu, scrawled on a slate board, also offers soups, burritos, salads, nachos and much more. You’ll be hard-pressed to tear your eyes away from the pie case which may be replete with pies, cakes, cheesecakes, Danishes, fruit and several types of cookies.

Feast your eyes on the apricot teacakes then let your taste buds confirm what your eyes tell you. These are perhaps even better than they look—thick, dense, apricot-infused teacakes with a generously slathered on apricot glaze. These aren’t artificially ripened, overly sweetened canned apricots, my friends. They’re imbued with Mother Nature’s freshness and the musky tartness of apricots that not long ago hung from a branch on a tall apricot tree.

It wasn’t that long ago, granola was ascribed with such characteristics as rustic, tree-hugger bran, organic, natural and boring. Today, artisans and innovators are doing interesting things with granola, elevating it from the aforementioned to something inspired and maybe even chic. Witch’s Brew’s take on granola is neither. It might be easier to find Forrest Fenn’s treasure than to find something other than oats on the plate and we love our fruits and nuts, too. The yogurt itself is unsweetened which is a major plus as are the fruits (kiwi, watermelon, grapes, apple slices) served on a separate bowl.

What Bohemians and long-ago frequenters of the Blue Dragon want to know is if the venerable oven can still weave its magic on a pizza. If you believe pizza ovens have a memory and that, like a good pan, they can be “seasoned,” the answer is “the magic is still there.” There are a number of pizza options on the menu, including a taco pizza (black bean-red chile sauce, roasted chicken and al-fresco toppings) and a white pizza sans tomato sauce, but with plenty of garlic. You’re sure to find one you’ll love.

Traditionalists and historians will enjoy the Pizza Margherita, the acknowledged progenitor of every pizza. Tradition dictates that the Margherita is adorned simply in the colors of the Italian flag: white from mozzarella, red from tomato sauce and green from basil. Add the color of char around the braided cornicione (the edge or lip of a pizza) and a bit of golden sheen from semolina flour and you’ve got a beauteous pie, one that’s chewy on the inside and crisp on the outside. The pie itself is rather thin, but it doesn’t wilt when picked up. Though the tomato sauce is generously applied, it doesn’t overwhelm the cheese. Thankfully salt isn’t a prominent part of this pie’s flavor profile.

The Witch’s Brew is an enchanting coffeehouse in the heart of the Land of Enchantment. One can only wonder what type of ditty the Gil of my childhood would have composed about its culinary alchemy.