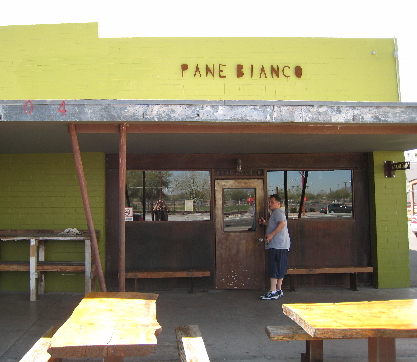 In 2007, the Food Network aired a program called “Top American Restaurants – Bon Appetit Picks the Best” in which the editors of Bon Appetit magazine selected the “top places in this country to enjoy the ultimate incarnations of iconic American cuisine.” Among the iconic American cuisine feted were hamburgers (a category won by Santa Fe’s Bobcat Bite), steak, tacos, fried chicken, barbecue ribs and pizza.

It may have opened a few eyes and furled a few brows when Bon Appetit’s culinarians named the artisan pies masterfully crafted in Phoenix, Arizona’s Pizzeria Bianco as America’s best pizza. The selection came as no surprise to anyone who has dined at the humble pizzeria where pizzaioli Chris Bianco plies his craft.

“Best in America” and even “best in the world” honors are nothing new for Pizzeria Bianco which earned the latter distinction from Travel & Leisure magazine as well as from author Ed Levine in his terrific tome, Pizza: A Slice of Heaven.

The one category conspicuous by its absence from Bon Apetit’s celebration of America’s best was sandwiches, perhaps the most iconic American cuisine of them all.

The sandwich, according to my friend Becky Mercuri, the fabulous author of American Sandwich, Great Eats From All 50 States, is the “king of food in America.” Her definitive book on the subject goes on to say that “Americans eat more than 45 billion sandwiches per year, with the average American consuming 193 sandwiches annually.” Doesn’t that sound like an iconic American cuisine to you?

Perhaps one reason the category of “best sandwich” was omitted is because the likely winner would have been the aforementioned Chris Bianco, the passionate perfectionist who purveys the planet’s premier pizza.

At Pizzeria Bianco, three-hour waits to be seated aren’t uncommon. Considering the oppressive heat of Phoenix in the summer, that speaks volumes about Bianco’s inspired pies. For those lacking the stamina or willingness to suffer that summer heat, Bianco provides a fabulous option–Pane Bianco, a small sandwich shop in which the wait is considerably less than at his pizza palace.

Similar to its sibling, Pane Bianco is situated in an undersized building. Unlike its more famous sister, there are no tables inside the restaurant. Instead, there are several picnic tables outdoors on which you can sit. If good fortune is smiling upon you, the tables will be in the shade.

At Pizzeria Bianco, Chris Bianco takes center stage in forming and baking each pizza in a wood-fired brick oven imported from Italy. At Pane Bianco, he’s also got a wood-fired oven, but it’s made of industrial steel, not brick. It makes no difference. Bianco might be the best bread maker in America, too–brick or steel oven not withstanding.

Pane Bianco is remarkably efficient. Walk in and to your immediate right you’ll find the day’s “market” offerings scrawled on a chalkboard. Market offerings vary on a daily basis and feature a different sandwich, salad and focaccia.

Loaves of freshly baked bread are also available–until the restaurant runs out (which may be early). You can also purchase bottles of imported olive oil and other specialty products.

Unlike so many sandwich shops in which the menu of available sandwiches reads like a compendium of every sandwich type there is, the menu at Pane Bianco lists only four sandwiches, including the market sandwich. Each sandwich goes for $8 (as of March, 2008).

Who needs a sandwich menu an arm’s length if the sandwiches you offer are absolutely fabulous! Each sandwich is meticulously wrapped in butcher paper and presented in a mini shopping bag with the Pane Bianco logo. Inside the bag, you’ll find a paper napkin as soft as a chamois. It will come in handy.

To wash it all down, Pane Bianco features only a few bottled drink options, but those include Bubble Up, a lemon-lime soda first manufactured in 1917. A house cola is also available as are sparkling water, iced tea and a fantastic cream soda.

The canvass for each sandwich is a crisp, wood-fired focaccia with a crunchy rim. It is neither too thin nor too thick, the perfect size so that it complements rather than dominates the wonderful flavors of each sandwich. Quite simply, this is–by far–the best panini bread I have ever had.

The sandwiches are elemental in their composition. Each is constructed of only a few ingredients, but the way those ingredients coalesce in flavor is a harmonious melding. Every bite brings with it the sensation of tasting every nuance and feature of every ingredient.

Take, for example, the Soppressata with Aged Provolone & Roasted Peppers. The Soppressata, a Tuscan salami made from choice cuts of cured-dry pork and flavored with black peppercorns, is fabulous–the epitome of salami perfection. Coarsely ground, it is sliced just thick enough to showcase its intense flavor.

The aged provolone is semi-hard with a tangy sharpness most cheese lovers appreciate. The roasted peppers retain the acrid smokiness that comes from being roasted to absolute perfection. This is a sandwich about which songs should be composed.

While it seems that the tuna on every tuna sandwich in America includes mayonnaise, Pane Bianco provides a pleasant departure from the norm. The tuna is imported from Portugal and is considered by Chris Bianco to be the best in the world. Having consumed hundreds of tuna sandwiches crafted from just caught tuna in many Massachusetts seaports, I consider myself quite the tuna expert.

The tuna at Pane Bianco lives up to its billing. It may not have quite the “just off the boat” freshness I loved in Massachusetts, but it is fresh and delicious with a surprisingly smooth texture considering it isn’t bound by mayo. As with the Soppressata sandwich, there is no one prevalent flavor in Bianco’s tuna sandwich. Aside from tuna, it is constructed of finely chopped red onion, the most luminous shade of green arugula you’ll ever see and Gaeta olives. It is seasoned with lemon and perhaps Balsamic vinegar to give it a tangy taste so unlike any tuna sandwich I’ve had. It is fabulous!

In 2006, author Ed Levine who proclaimed Pizzeria Bianco the “best in the world,” wrote an article entitled “22 Sandwiches That Will Change Your Life” for Details magazine. One of the sandwiches making this sacrosanct list was Pane Bianco’s masterpiece of housemade mozzarella, local tomato and basil. If you’ve ever had Bianco’s mozzarella, you can understand how such a simple sandwich could make such an exclusive list.

Pane Bianco, like its sibling, is an outstanding restaurant showcasing the talents and passion of one of America’s best chefs. It redefines sandwiches!