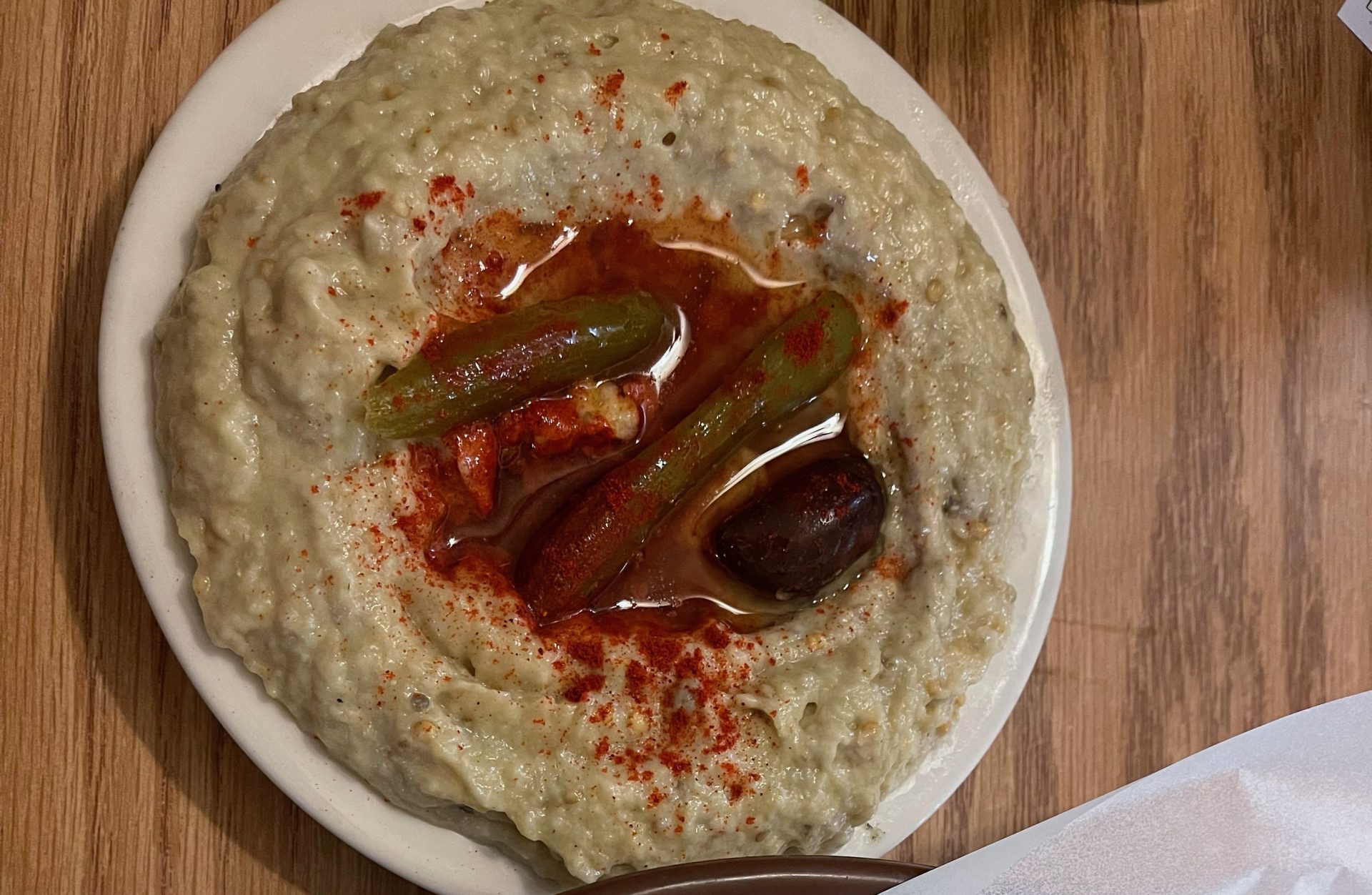 Visiting Haji Baba one day before the end of Ramadan in 2022, I pondered the Muslim observation of the month-long period  when the faithful are encouraged to give to charity, strengthen their relationship with God and show kindness and patience. Observed during the ninth month of the Islamic calendar by Muslims worldwide, Ramadan is a month of fasting, prayer, reflection and community.  It dawned on me, a life-long Catholic, that not all “Papists” like me have the spiritual and physical stamina to refrain from eating and drinking from sunrise to sunset for an entire month.  I probably don’t.

That these thoughts came to mind when we were about to enjoy an exquisite repast wasn’t lost on me.  I thought about my friend and colleague Nader Khalil who wouldn’t be able to join us for dinner–and he’s been telling me about Haji Baba for years.  Nader does have the perseverance and stamina to observe the Ramadan fast every year.  He’s one of the very best, most genuinely kind people I’ve ever met.  In fact, if challenged by xenophobes to point out the best example of what a Christian should be, it’s always Nader that comes to mind–and he’s Muslim.  He’s a polite, respectful gentle man who treats everyone as he would like to be treated.

Nader would have loved dining at Haji Baba, his very favorite Middle Eastern restaurant during the years he lived in Scottsdale.  When my Kim and I visited, I practically had the menu memorized from my talks with Nader.  He advised me under no uncertain times not to miss the lamb tongue sandwich, knowing my palate would appreciate it.  He regaled me with tales of the aisles replete with Middle Eastern comestibles and cooking utensils.  He practically had me drooling at the thought of having pistachio baklava at the conclusion of our meal. Then I came down to Earth, remembering that my friend would not be enjoying these delights.

Nader isn’t the only person who loves Haji Baba.  In 2021, the Phoenix New Times rated Haji Baba the very best Middle Eastern food in Phoenix.  The reviewer wrote “How to make a lifelong Haji-Baba fan: Bring them to the restaurant one time. That’s what happened to us, and decades later, there aren’t many eateries in Phoenix we prefer to this unassuming strip mall restaurant/market.”  Over the years, Haji Baba has been showcased on television, magazines, newspaper, and has received recognition for its distinctive and authentic cuisine.  My Kim and I can now be counted along with Nader as lifelong Haji-Baba fans.

Haji Baba is a quintessential unostentatious Middle Eastern grocer and counter-service joint where everyone is made to feel welcome.    It’s a home away from home for Arizona State University students who can walk from campus for their Middle Eastern cuisine fix.  Step inside and you’ll see why Phoenix New Times declared “We’re also big fans of the exotic aromas that have lived inside Haji-Baba for the past several decades. If we could bottle the scent of this place, we would.”  Dine at Haji Baba once and your olfactory memories will linger for a long time.

As with many local Middle Eastern restaurants, Haji-Baba is both a market and a cafe. The section dedicated to groceries takes up about two-thirds of the space. Aisles are absolutely crammed with cans of fava beans, bags of lentils, more tea than was thrown into Boston Harbor, packages of pita, jars of preserved lemons, and just about every ingredient associated with Middle Eastern cuisine. Directly ahead of you as you walk in is a pastry counter displaying the most mouth-watering baklava and…even more baklava (six different types).  To your right as you walk in is the dining room, a relatively small space with about a dozen tables inside and a few more spilling over into the market space.  Painted on one wall is a mural reminiscent of the James Bond movie The Spy Who Loved Me.

Unlike so many restaurants passing on their costs thanks to the build back better economy, you won’t suffer a case of sticker shock when studying Haji Baba’s menu–unless it’s shock and awe at just how low prices can be.  A gyros sandwich with twice as much meat as you’ll find at most Middle Eastern restaurants is about half the cost.  At just under eighteen-dollars, the mixed Kabob plate would feed a small family.  Appetizers, called “side orders” on the menu are unbelievably inexpensive.  Sandwiches are all priced below what you’d pay for a Big Mac and you’ll be far more satisfied.  Plates and combinations are a delicious bargain.

Haji Baba’s legendary lamb tongue sandwich was prominently featured in the 2018 edition of Phoenix New Times Essentials, a compendium of 50 dishes, drinks, and food experiences that make up the culinary backbone (and personality) of metro Phoenix.  The New Times described the lamb tongue sandwich thusly: “The sandwich bulges with velvety hunks of slow-cooked tongue, which are topped with a light salad and cradled inside pillowy soft pita bread. The tongue is stewed slowly for six to eight hours, an employee told me recently, and subtly seasoned with garlic, pepper, and herbs. The meat is earthy and savory, and as tender and comforting as grandma’s pot roast. “Try it once,” the menu says, “and you will not stop talking about it!”

Alas, we were unable to try it even once.  Our server nearly broke my heart when he told me the restaurant hasn’t been able to find lamb tongue in a while.  Aargh!  It’s a good thing there were no tall trees and short rope in the area.  Our server offered little consolation, telling me gyros are probably the next best thing on the menu.  Gyros?  Aren’t all gyros just about the same?  Thankfully that’s not the case.  Haji Baba’s gyros are the very best we’ve ever had.  As with all sandwiches on the menu, gyros are served with tomatoes, lettuce and pickles wrapped in Arabic bread.

There are two different gyros listed on the menu–gyros (mixture of lamb and beef seasoned with Greek spices cooked on a spit, garnished with sour cream cucumber sauce and herbs) and gyros DLX (with onion and feta cheese on hand made Pita).  My Kim had the (nothing about it is) regular gyros and was ensnared at first bite.  We were surprised at just how large each chunk (yes, chunk) of that lamb and beef amalgam was.  Some pieces were as thick as a burger, not at all like the thin shards of shaved meat we’ve experienced elsewhere.  Greek spices imbued the meat with olfactory-arousing aromas and addictive flavors. Pita, one of the world’s most ancient breads,  had a delightfully smoky flavor and soft, pillowy texture that made a nice home for the meat to nestle in.

As has been too predictably (for me) the case, our appetizer was Haji Baba’s Baba Ghanooj served with pita.  A pool of olive oil with a generous sprinkling of sumac formed the center of this delightful starter.  Swimming in that pool are some of the most addictive pickles and olives you’ll ever have.  The pita isn’t especially thick which is just fine because it means the prominent flavor of each bite is a garlicky, creamy, oh-so-delicious baba ghanooj.  Roasted, pureed eggplant rules!

Baklava is the only dessert on the menu, but there’s a six pack of baklava under the display case. Walnut may be the most familiar filling, but most other common types of nuts are also available inside layers of airy pastry. Each has a distinctive shape. The pistachio baklava (my lifelong favorite) is cylindrical.  The Queen baklava, replete with mixed nuts, is a disc with a crimped edge.  We didn’t have room to try them all, but that’s what additional visits are for.  Do yourself a favor and save room for at least two.

During our visit to Haji Baba, my heart went out to Muslim friends who couldn’t partake of some of the best foods in the world during their holy month.  Now that’s a sacrifice for faith.