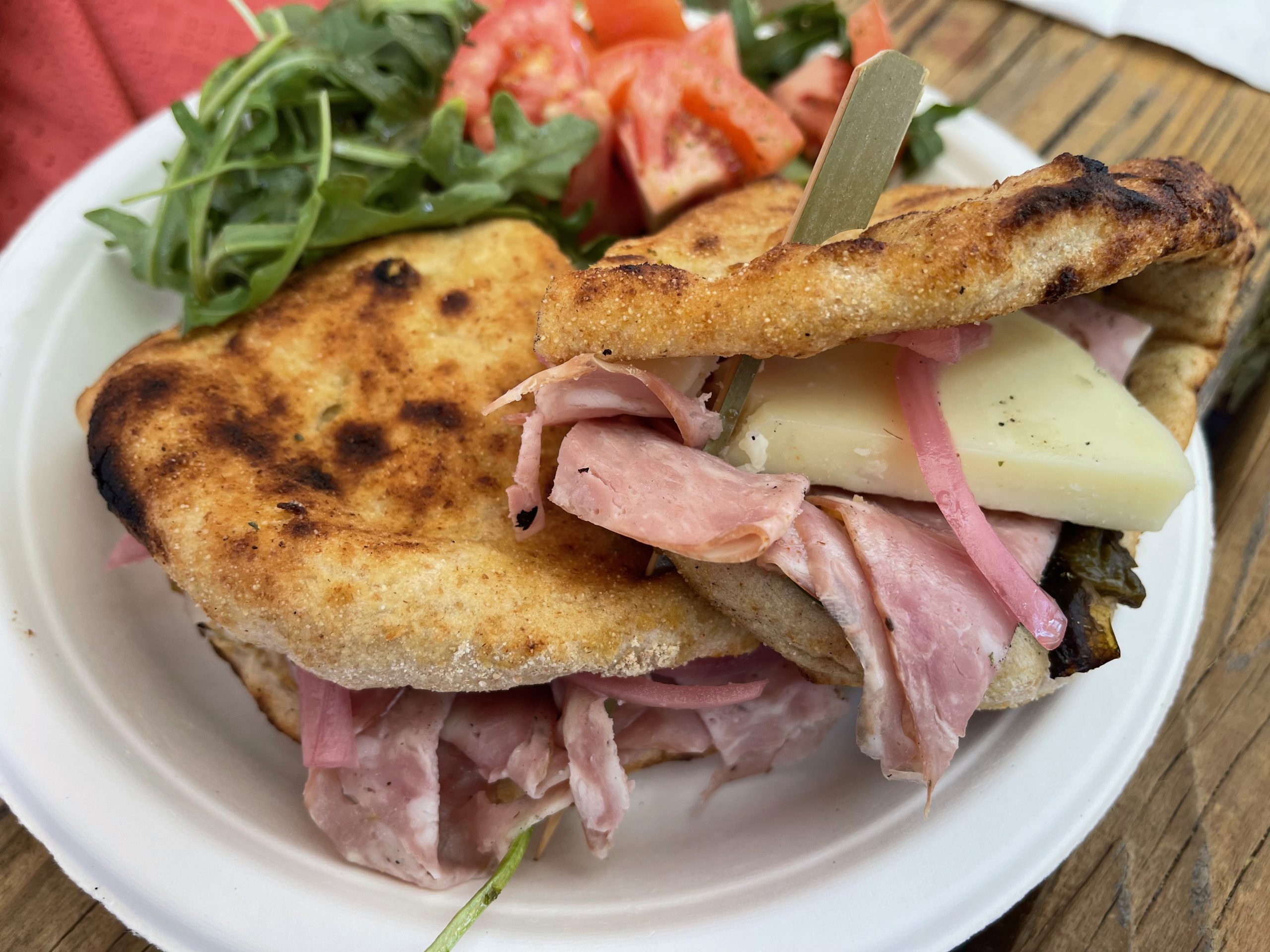 Is there anything more relaxing than a wood fire: its mesmerizing orange and blue flames as they lick the air, the warmth and comfort of heat as it overcomes weather’s chilling bite, the meditative timbre of wood crackling  over the flames, the spitting and hissing of red-orange embers and especially aromas which trigger heart-rending reminiscences of childhood days sitting around a fire with family and friends.  Just the thought of a wood fire is therapeutic, imparting benefits that are both salubrious and soothing.

My attempts  at transporting you to a time and place in which wood fire helped transcend life’s vicissitudes are likely feeble, but let me add another element that might do the trick.  Now imagine the yeasty bouquet of baked bread wafting toward you from a wood-burning oven. It’s been well established that there is no more effective medium for rekindling pleasant memories than the aroma of bread baking, but studies have proven that the aroma of baking bread actually triggers more positive, helpful, kinder, and more altruistic behavior in people.

Those studies–published in the Journal of Social Psychology–concluded that there is something about the effect of the smell of bread baking that is not just pleasant on a subjective level, that effect is repeatable and crosses demographics.  It’s no wonder real estate agents believe if you want to sell your house, bake bread just before potential buyers come to visit it.  Is it any wonder that the second you step into Pa’La and imbibe the floury fragrance of bread baking over a wood oven, your mood improves and all of a sudden you’d like to teach the world to sing in perfect harmony.

The genesis of that aroma are a hand-built wood-burning oven imported from Italy and a forged steel grill.  Though the oven resembles Magneto’s helmet, you’ll be almost as transfixed by the orange flames and burning ash and embers as you will be by those inimitable aromas and the siren-like effect they’ll have on you.  Ah, those aromas.  Long-timers in Phoenix might concede that the only other eatery in which they’ve been rapt (and wrapped) in such a fragrant balm is at Pizzeria Bianco, heralded as the best pizza in the country (if not the world) by virtually every media cognoscenti.

If you’re looking for the genesis of the bread-baking genius at Pa’La, look no further than Italian-born-and-raised founder Claudio Urciuoli.  Interestingly, in Italy he had the opportunity to apprentice with a master baker in a traditional but very rigid apprentice-to-master career path, but declined when the baker asked that he dedicate his life to his bakery.   After enrolling in culinary school, he spent several years “staging” (unpaid internship when a cook or chef works briefly, for free, (or to gain a position) in another chef’s kitchen to learn and be exposed to new techniques and cuisines) in Michelin-starred resorts in France and Switzerland before he came to look for America.

A few years after making his way to California and establishing himself as a formidable chef, Urciuoli spent five years with legendary restaurateur Nancy Silverton, helping her grow La Brea Bakery from a small storefront to a nationally recognized brand.  After relocating to Phoenix several years later, he spent a 16-month stint working with Chris Bianco, the country’s preeminent pizzaioli, to develop dinner operations at Pane Bianco and start up a new Italian restaurant.  Working with such indefatigable personalities such as Silverton and Bianco could only help any prospective bread-baking brainiac, but Urciuoli isn’t solely a bread baker.

Pa’La’s website is reflective of Urciuoli’s passion for quality ingredients and the select organic farmers and responsible artisans who provision them.   Because ingredients are sourced at their peak, the menu is constantly changing.  Though you may not know what you’re going to have, you can be assured that it’s prepared from the best ingredients available.  Some of those ingredients–as highlighted on Pa’La’s website include olive oil, a high quality extra virgin variety; vinegar, perfectly balanced profiles with exceptional body and flavor; sea salt, harvested by hand from naturally fed salt pans; and so many others.

Because of the perfectionist’s insistence on quality ingredients at the peak of freshness, you might be told the ingredients for the dish you’d like to order won’t be delivered for a couple of days.  Such was the case when we wanted to start our meal with Prince Edward Island (PEI) mussels.  But I digress.  Those uncompromising standards are among the manifold reasons Pa’La earned “Best New Restaurant” accolades from Phoenix New Times in 2018, the year it introduced itself to the Valley of the Sun.  Not with a whimper, but with a bang did the word get out about a small restaurant with a less is more approach to ingredients and cooking.

That approach has cultivated such a virtual religious fervor among its devotees (including my sister Anita) that “best of” laurels are as frequent as hundred-degree days in June:  24 best Phoenix area restaurants from asfamily.com; Top 100 Restaurants in the Valley of the Sun from Phoenix Magazine; Top 100 Restaurants in Phoenix from azcentral.com; and 22 Hottest Restaurants in Phoenix from eater.com.   To absolutely no one’s surprise, Pa’La’s second location–this one Downtown–is in the same accolades track and shares the uncompromising pursuit of quality and simplicity  as its elder sibling

With Prince Edward Islands not an appetizer option, our Miss Congeniality choice was burrata, a seemingly ubiquitous Italian cheese that’s as creamy and delicate as it is delicious.  Chef Urciuoli is credited with introducing the “Queen of Cheese” to Phoenix in 2007 so we figured it would be sublime.  Ordinarily I’d rhapsodize poetic about how exquisite this oozing, buttery, melt-in-your-mouth cheese is, but what accompanied the burrata warrants even more affection.  That would be skiaccia, a kind of bread traditionally made in the regions of Tuscany and Umbria in central Italy.  The skiaccia was the source of those intoxicating aromas that greeted us as we approached Pa’La.  It’s akin to the love child of sweet-savory focaccia and pita…and it tastes even better than the aroma which precedes it.  Rarely have we been so impressed by bread.

Comedian Mitch Hedberg once lamented that “I ate one anchovy, and that is why I did not eat two anchovies.”  Very few foods are as maligned (and sometimes solely because of its reputation) as the humble anchovy.  It probably won’t surprise you that I love anchovies (what do you expect from a guy who’s eaten ants and grasshoppers).  The attendant taking our order was probably shocked at my haste and enthusiasm in ordering the Spanish boqueros (marinated white anchovies) atop the Navarro Bowl (a salad with five whole grains, roasted veggies, toasted seeds, cannellini beans dressed in a blend of extra virgin olive oil, cabernet vinegar, and smoked shoyu soy sauce.  Without doubt, the Navarro Bowl is one of the very best bowl meals I’ve enjoyed in my 39 years on Planet Earth.  Then the boqueros elevated the bowl to rarefied air.  This may be the singular most satisfying meal I’ve had in Phoenix.

Of course, the transcendent skiaccia had a lot to do with that.  My Kim’s lunch choice was a Salame Rosa (a magnificent sandwich made with pickled red onions poblano, Pecorino and the very best salame rosa we’ve ever had all nestled in that fabulous skiaccia).  Salame rosa is a pink cotto (cooked) salame which originated in Bologna.  Its made from prime shoulder cuts and is seasoned with coriander, white pepper and mace and is sometimes referred to as “mortadella’s brother.”  Frankly, it’s much better than any mortadella we’ve ever had.  The Pecorino was predictably outstanding and the poblanos added a surprising piquancy.  This sandwich is among the five best sandwiches I’ve ever had (one of the other five is also in Phoenix at Pane Bianco).  It’s a sandwich so good we’re considering moving to Phoenix.

Pa’La and that magnificent bead blew us away!  It’s a superb restaurant serving simple fare in elegant and exquisite ways without betraying a commitment to simplicity and the use of quality ingredients.  Very few restaurants have impressed me as much.