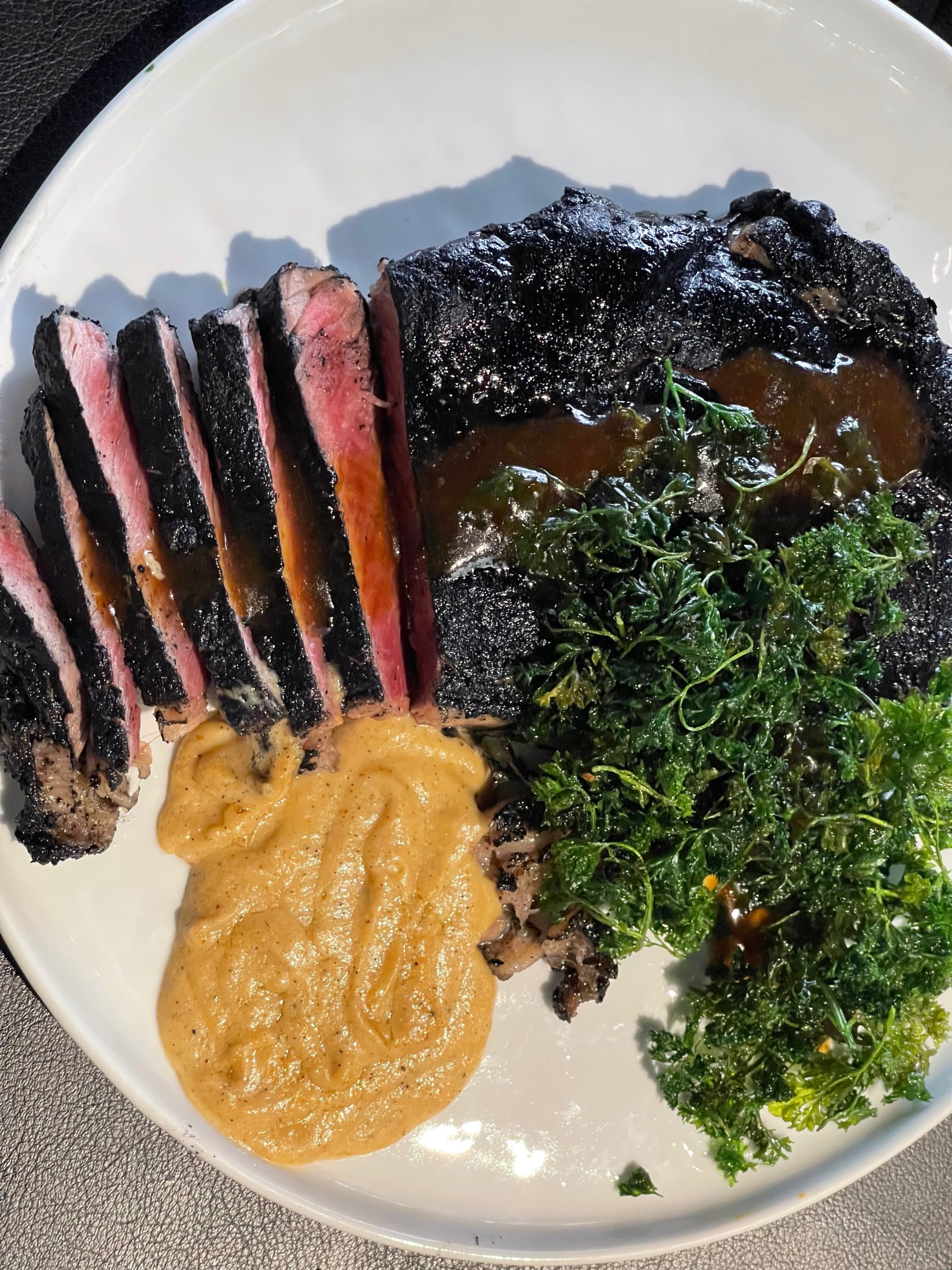 The cultural and culinary histories of Arizona and Mexico are interlocked, transcending  the geographical borders that separate them. In fact, until only 1822, what is now the state of Arizona was still a part of the Mexican state of Sonora. It stands to reason, therefore, that Arizona’s cuisine of would be largely (but by no means exclusively) influenced by the cuisine of its Sonora.  Those influences extend far beyond the common use  of chiles, beans, flour tortillas, grilled meats and tomato-based sauces.

Rooted in Sonoran cuisine with tendrils in the cuisine of other Mexican states and molded by the American palate, Arizona’s Mexican cuisine continues to evolve in diversity, sophistication and depth.  For that, I am most grateful.  During 18 years of business travel to the Phoenix area, I was convinced that the only thing worse than Arizona’s chile-influenced Mexican food was The View.  That impression was based primarily on well-intentioned colleagues believing New Mexicans would enjoy restaurants such as one we all called “Mocoso’s,” the Spanish word for a snot-filled person.

A weeklong visit to Tucson in 2010 that included meals at two of Cultural Trip’s list of the 10 Best Mexican Restaurants in Arizona did nothing to rehabilitate my opinion of Arizona’s chile-based Mexican food (I did fall madly in love with Sonoran Hotdogs from El Guero Canelo).  Mind you, just five years later the city of Tucson became the first U.S. city to be designated by UNESCO (United Nations Educational, Scientific and Cultural Organization) as a “City of Gastronomy.”  Could I have been so wrong about Arizona’s Mexican food?  Why did the foods rooted in Sonora (save for the Sonoran Hotdog) evoke such a snorefest on my taste buds?  Are my preferences and prejudices toward chile all based on having been weaned on New Mexico’s superior red and green?

Thankfully one of my most trusted resources lives in Ahwatukee, an urban village of Phoenix, Arizona and she’s known of my pedantic palate all of her life.  My baby sister Anita may not be the insane harum-scarum her brother is, but she really knows her way around food.  When she enthusiastically recommended Bacanora, “the bootlegged spirit of bringing Sonoran cuisine to Downtown Phoenix,” I had no doubt the restaurant would be spectacular.  Alas, in three visits to the Phoenix area, we haven’t been able to secure reservations for Bacanora.  That’s saying something.

What it isn’t saying–and I’d like to figure out for myself–is what differentiates Bacanora’s Sonoran cuisine from that of virtually every Mexican restaurant in Phoenix, Tucson and many others throughout Arizona.  Its menu isn’t much different from any other Sonoran Mexican restaurant in the state.  Surely the differentiators can’t solely be attributed to the open flame of the wood-fired grill and the fact that “Each dish is made with the love of the ingredients, the love of the guests, and the love of the community.”

Though our shadow didn’t darken Bacanora’s doors during our May, 2022 visit to Phoenix, we were determined to find a restaurant on par with Bacanora.  Failing that, we’d find a restaurant from Sonora that doesn’t prepare the ho-hum foods of so many Sonoran Mexican restaurants in Arizona. That goal coincided (almost) with the April, 2022 launch of Call Her Martina which purports to serve “Modern Mexican cuisine “with a twist.”  Located in the Scottsdale Waterfront, it’s not what your mind might first conjure when contemplating a Mexican restaurant.

Call Her Martina prides itself on providing a gastronomic experience (emphasis on experience, not solely a meal).  Its mission: “At Call Her Martina we dare to be different.  We bring a twist to the idea of Mexican cuisine to Scottsdale by serving modern Mexican inspired dishes with unique touches, outstanding cocktails and exceptional service.”   While the Moreno family which owns the spectacular edifice  hails from Hermosillo, the capital of Sonora, the restaurant vibe is more akin to what you might find at a high-end Mexico City restaurant or Las Vegas casino.  It’s resplendent in modernity and luxury, bespeaking of excitement and fun.

“Exceptional service,” the third prong in the restaurant’s mission triad begins the second you step in.  An affable hostess will escort you to your table where she’ll place you in the capable hands of some of the best servers in Arizona.  Trust them to help guide you through your meal with a rare passion and alacrity.  Our server, the gracious Melo indulged all my questions and even explained the name “Call Me Martina:” The name is an homage to the empowerment of women in the family, their strength, their heart and their personality.”  She pointed out one wall depicting black-and-white photographs of the inspirational women of Mexico’s golden age.  In a sense Martina is a part of all empowered women.

Martina’s menu is wholly unlike the menu at any Sonoran restaurant we’ve visited.  Appetizers include some of the “usual suspects” making it easy to take note such surprises as ribeye chicharron guacamole.  There are five appetizers on the menu, but you could easily start your meal with one of the six items on the tacos and tostadas menu.  The salads and veggies section of the menu lists three very shareable items.  Four entrees will easily pique your interest and whet the appetite of carnivores and landlubbers alike.  For the latter, there’s also a two item fresh seafood menu.  Sides and desserts you probably won’t be able to resist cap off a very intriguing menu.

As you peruse the menu, your faithful server will bring a trio of salsas to your table.  Rather than the usual triangular tortilla chips, a number of crispy, fried tostada shells accompany the salsas.  In Mexico, the term “salsa” pretty much means any kind of sauce  (béchamel, marinara, etc.).  A salsa is essentially any sauce that can be put on pretty much anything you can think of: tacos, quesadillas, eggs, rice, soup, ceviche, burgers.  Martina’s salsas didn’t have the piquancy of New Mexican salsas nor were they constructed of the same ingredients, especially onion.  Their texture bespeaks of being pureed so they’re more efficient for dipping or as a pour-over.

Who among us has never laid on the grass gazing up at the sky and thought, “Wow, those fluffy white clouds look like giant delicious balls of fluff I’d love to eat?” We were expecting beets whipped into a frothy, creamy cloud when we ordered the beets in the cloud from the vegetables menu.  Instead, it was the creamy garlic goat cheese that was fluffy and cloud-like.  The beets were large wedges laying on that fluffy goat cheese cloud where their earthy sweetness contrasted well with the fetid fromager, a hint of lemon zest and caramelized pecans all blanketed by spiky, leafy arugula.  We certainly were up in the clouds over this starter.

Aside from their deliciousness, what we appreciate most about street elotes is their ubiquity.  They’re proffered on street stalls and in high-end, fine-dining restaurants and they’re almost always messy and delicious.  Count Martina’s street elotes (corn on the cob, chipotle aioli, cotija cheese, chile lime powder) as among the very best we’ve had.  My Kim scrapes the golden niblets from the cob onto the plate while I make like Mickey and Donald, pausing only to take a breath and appreciate their goodness.  Martina staves off some of the messiness by inserting a lollipop stick on the cob.  Somehow, I still managed to leave my beard glistening.

Sonora’s rolling hills boast some of the best cattle ranches in Mexico. Cattle has historically been so important in Sonora that its state flag is emblazoned with a bull though perhaps carne asada might be more appropriate.  Sonora is renowned for its carne asada (grilled beef), a favorite in both Arizona and New Mexico.  Martina’s ribeye, a grilled prime cut sprinkled with blackened onion ashes and dampened with a beef reduction is better than the best carne asada.  It’s better than prime steak from most steakhouses.  This steak is resplendent at a medium degree of doneness that renders it tender, moist and absolutely delicious.  The only real accompaniment is maybe a tablespoon of cauliflower puree (much too small a portion for something so good).

I was slightly dubious when Melo recommended verde aguachile (shrimp, celery citrus oil, mint, grilled avocado, coconut, green apple, corn tostadas) for my entree.  Literally “chile water,” the aguachile is essentially a very piquant version of ceviche de camarones (shrimp) in a cold citrus and piquant chile broth. The incendiary nature of this broth won’t hit the back of your throat as some chiles do; the impact will be more like a piquant, savory, citrusy broth punctuated with waifishly thin cucumber, jalapeno and apple slices . The citrus mitigates most of the heat. With every spoonful, you’ll extricate butterflied shrimp, the type and quality of which you generally find on ceviche.

Some of you who have been subjected to my rants against Arizona chimichangas will probably be surprised (if not shocked) that we found a chimichanga in Scottsdale that blew us away.  It wasn’t defaced by what Arizonans call chile.  Instead of that gravy-like red atrocity, this chimichanga was slathered with caramel.  Instead of a savory filling, this chimichanga was stuffed with a dulce de leche cheesecake.  A deep-fried tortilla with a generous sprinkling of cinnamon was the only real commonality in terms of flavors between this dessert chimi and the savory chimis so beloved in Arizona.  A scoop of vanilla bean ice cream was a welcome piling on of deliciousness.  You shouldn’t visit Call Me Martina without having the cheesecake chimichanga!

Far too many servers at far too many restaurants perform wait shtick routines that are as convincing as Kevin Costner playing Robin Hood.  When we’re taken care of with genuine warmth and ambassadorial flair, it behooves us to call it out.  Our server Melissa, who goes by “Melo,” has an iridescent smile that could cheer up a gloomy day.  Equally vivacious in Spanish or in English, she provided sage recommendations and essentially guided us through our meal.  Rarely have we seen anyone (chefs included) with as much enthusiasm for  a restaurant’s offerings and for the cuisine of her homeland.  Originally from Tijuana, Melo is proud to show off a menu that bespeaks of her country’s finest culinary offerings.

In an interview with What Now Phoenix, one of the owners explained that Call Her Martina plan to serve dishes that are currently trending at the hottest restaurants south of the border.   That bodes well for Phoenix and Arizona, but not so well for my long-held opinions of Arizona’s Mexican food.