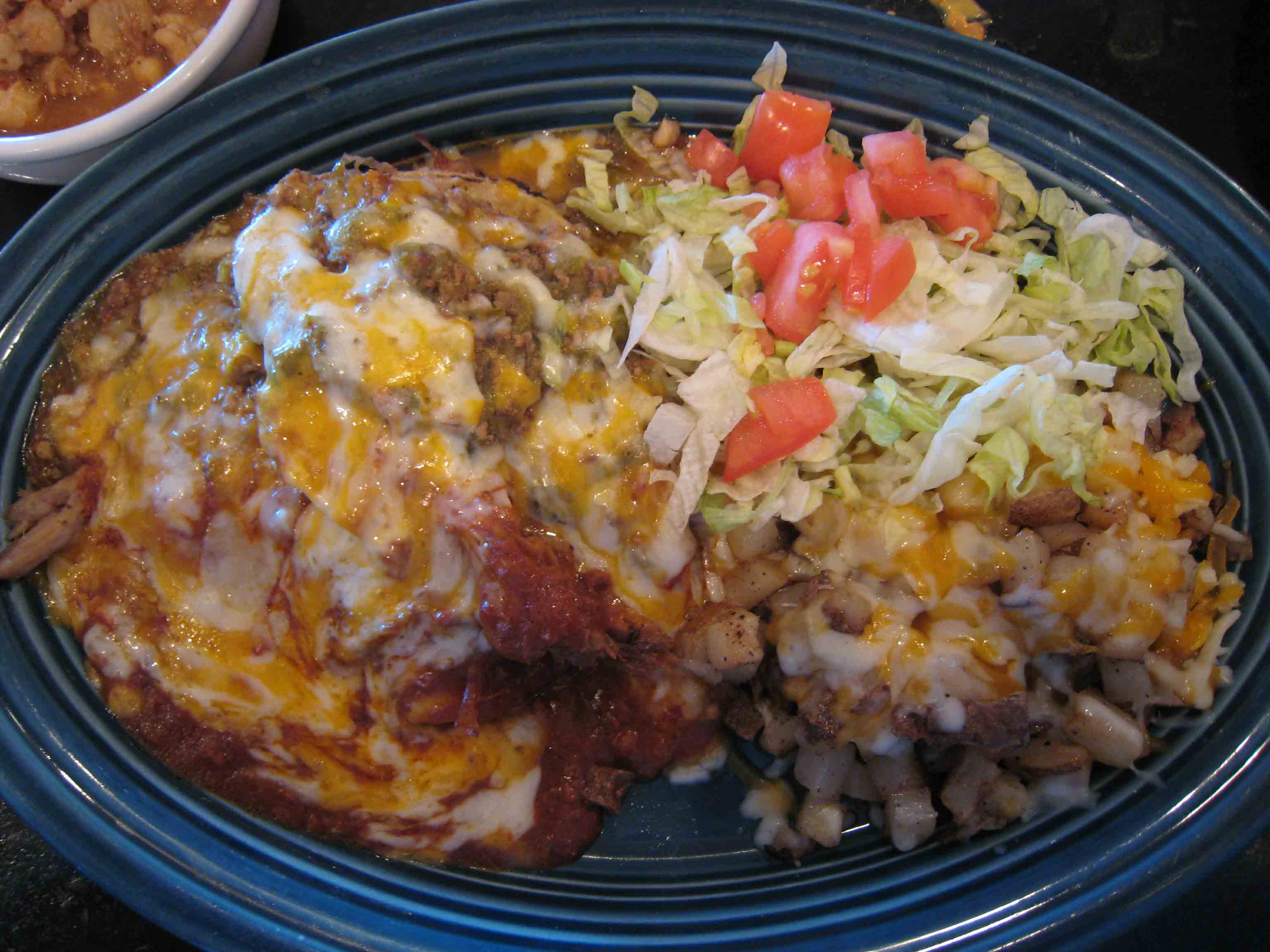 Her sunrise could bring light into a blind man.
Her sunset could put tears there in his eyes.
Her colors are laying there in brush strokes.
Underneath those peote skies.

The lay of the land stirs all of my emotions.
She heals me with a laid back energy.
She holds onto my broken lifeless spirit.
And molds me just like pottery.
And nowhere that I’ve ever been can make me feel this way.
That’s why I’m going there to stay.
– The Bellamy Brothers

Santa Fe’s preternatural beauty is so captivating that even the plethora of writers, artists and musicians who pilgrimage to this jewel of the Southwest are at a loss for adjectives to adequately describe it.  Perhaps because of their scarcity of synonyms, some of them refer to it as “Fanta Se” as in fantasy, a city so singularly soul-stirring that its mystical qualities seems to transcend reality.

Even Santa Fe’s cuisine is lavished with laudation.  Critics and patrons alike  lionize Fanta Se’s restaurants and the world class chefs which preside over  traditional earthen ovens, ultra-modern steely stoves  and Spanish style tapas grills to prepare the mouth-watering marriage of traditional and contemporary cuisine that has made Santa Fe one of the country’s foremost dining destinations.

For every fantasy indulging restaurant and every hot-bed of haute cuisine, there are plenty of “down to earth” restaurants in Santa Fe.  The appellation for one of  them, the Original Realburger, even speaks to its earthiness.  Perhaps that’s why it appeals so much to diners who who don’t necessarily want the taste bud confusion of disparate exotic ingredients competing for their rapt attention; diners who want something filling and delicious without having to spend a week’s salary; diners who don’t need or care to be impressed–in other words real people who want real food.

Contrary to its name, RealBurger isn’t solely about burgers.  In fact there are only three burgers listed on the menu–a six-ounce Angus beef burger, a double patty Angus beef burger and a tortilla or sopaipilla burger.  What you will find on that menu is a compendium of hearty, stick-to-your-ribs American comfort food along with traditional New Mexican favorites, innovative vegetarian entrees, steak, pasta and a few surprises thrown in for good measure.

RealBurger’s domicile is in a spacious ranch-style edifice on Old Pecos Trail, a space previously occupied by the Red Skye Grill, Peppers, Chilacas and the Pecos Trail Pizzeria among others.  Though somewhat on the outskirts of the city, it is certainly not off the beaten trail (no pun intended).  There are several fine restaurants in the area and all have their following.

RealBurger is by no means a new, up-and-coming restaurant.  In fact, it’s got a long history in Santa Fe, dating back to 1974 as both a restaurant and a catering business.  RealBurger took up residence at its current Pecos Trail Inn location in the early part of 2008 and according to Larry Love, a faithful reader of my site, may just be the restaurant which breaks the “location curse” that severed any promise its predecessors may have had.

Shock and awe might be your reaction at first perusal of the menu.  The appetizers include Yakidori Orange Chicken Kebabs, Yakidori Grilled Shrimp, Mini Egg Rolls with Orange Sauce and Taco Dogs ( a hot dog and slice of American cheese wrapped in a tortilla and served with a paprika-based dipping sauce).   More traditional New Mexico appetizers include  chili (the spelling on the menu, not mine) con queso and salsa with red, yellow and blue corn chips.

Neither the chili con queso or the salsa are particularly piquant, but they’re both good.  The jalapeño-based salsa is thick, chunky and maybe just a bit on the salty side.  The chips are formidable enough to scoop up a lot of salsa without breakage.  The chili (my spell-checker is going berserk over this aberrant spelling)  con queso is made with a higher grade of processed cheese than at most restaurants and is better than most homemade con queso, but isn’t quite as creamy as the wonderful queso fundido served at some excellent Mexican restaurants.

Breakfast is served from 7AM through 11AM.  Mike Lee, another fan of the RealBurger and faithful reader of this blog, tells me the carne adovada is absolutely top-notch, but laments the fact the restaurant doesn’t offer breakfast all day long–which means if you get there after breakfast hours, you’ve got to order lunch.  Not that that’s a bad thing.

RealBurger is one of two Santa Fe restaurants (outside of the chains) which offers fried chicken and since the other one charges $25, RealBurger is the better bargain at about a third the price.  Three pieces (breast, leg and thigh) of honey-stung chicken don’t need the Colonel’s eleven herbs and spices to be moist, tender and absolutely delicious.  The white meat on the breast is juicy and redolent with the aroma of the south.  Its light batter coating has just a hint of honey, the type of which you’d slather on a biscuit.

Unfortunately, this entree comes not with a Southern biscuit but with a dinner roll.  It also comes with your choice of rice pilaf or vegetables and mashed or baked potatoes.  The baked potato is dressed with sour cream, melted butter and chives.  It is baked to perfection.

If New Mexican food is  what you’re craving the menu has some popular standards and a couple of non-traditional surprises.  Among the latter is something called a sopapizza, an eight-inch round sopaipilla topped with marinara sauce, cheese and your choice of three standard pizza ingredient offerings.

Trust me on this one–you’re going to want the shredded pork.  It’s reminiscent not as much of the pork used on carne adovada, but of pulled pork offered on barbecue sandwiches and plates in Kansas City and North Carolina.  The shredded pork impressed me so much that my order on our next visit to RealBurger was indeed the pulled pork sandwich.

The enchiladas are quite good in their own right with the green chili having an edge over the red in both piquancy and flavor.  The enchiladas are topped with a generous amount of melted, shredded white and yellow Cheddar.   Of the two sides I ordered, the papitas stood out.  They’re small diced potatoes with a flavor and texture similar to really good French fries.  The other side, posole, at first glance a picture of  perfection, was flawed by the addition of enough cumin to diminish the flavor of corn and pork (to be honest, any cumin is too much cumin).

Sopaipillas are large and round with little of the puffiness normally found on sopaipillas.  In fact, they’re more reminiscent of Navajo tacos or buñuelos than of traditional New Mexican sopaipillas.  That doesn’t mean they’re not excellent, because they are.   They’re served steaming hot and to no surprise with real honey.

The pulled pork sandwich is one bodacious barbecue behemoth.  In the style of Kansas City or the Carolinas, the only thing with more pork is any spending bill submitted by the United States Congress.  Unlike that for our fiscally irresponsible Congress, however, the approval rating for this one would go through the roof.  It’s a very good barbecue sandwich with and the pork isn’t the type I refer to as Ivory Snow in that it’s not 99 and 44/100 percent pure.  This is pork with more dark meat than white, bits of fatty pieces here and there and even some crusty skin in places.  That’s the way pork should be on a pulled pork sandwich.

Another characteristic to be appreciated of this pulled pork sandwich is the mild smoke.  You won’t feel as if you’re ingesting a lot of low and slow smoke, just enough to impart its flavor supporting qualities.  The sauce is vinegary and of medium thickness.  It goes well with the pork.

With a name like RealBurger on the marquee, the burgers had better be good.  The Real Burger is!  Credit that to a six-ounce freshly hand-packed Angus beef.  It’s served with your choice of condiments and may include a thick slice of white onion, pickles, lettuce, tomato and the usual suspects.

One of the things that most surprises regular visitors to RealBurger like Mike Lee and Larry Love is that they still find themselves surprised by some of the down home and real touches on the menu.  RealBurger is keeping it real!