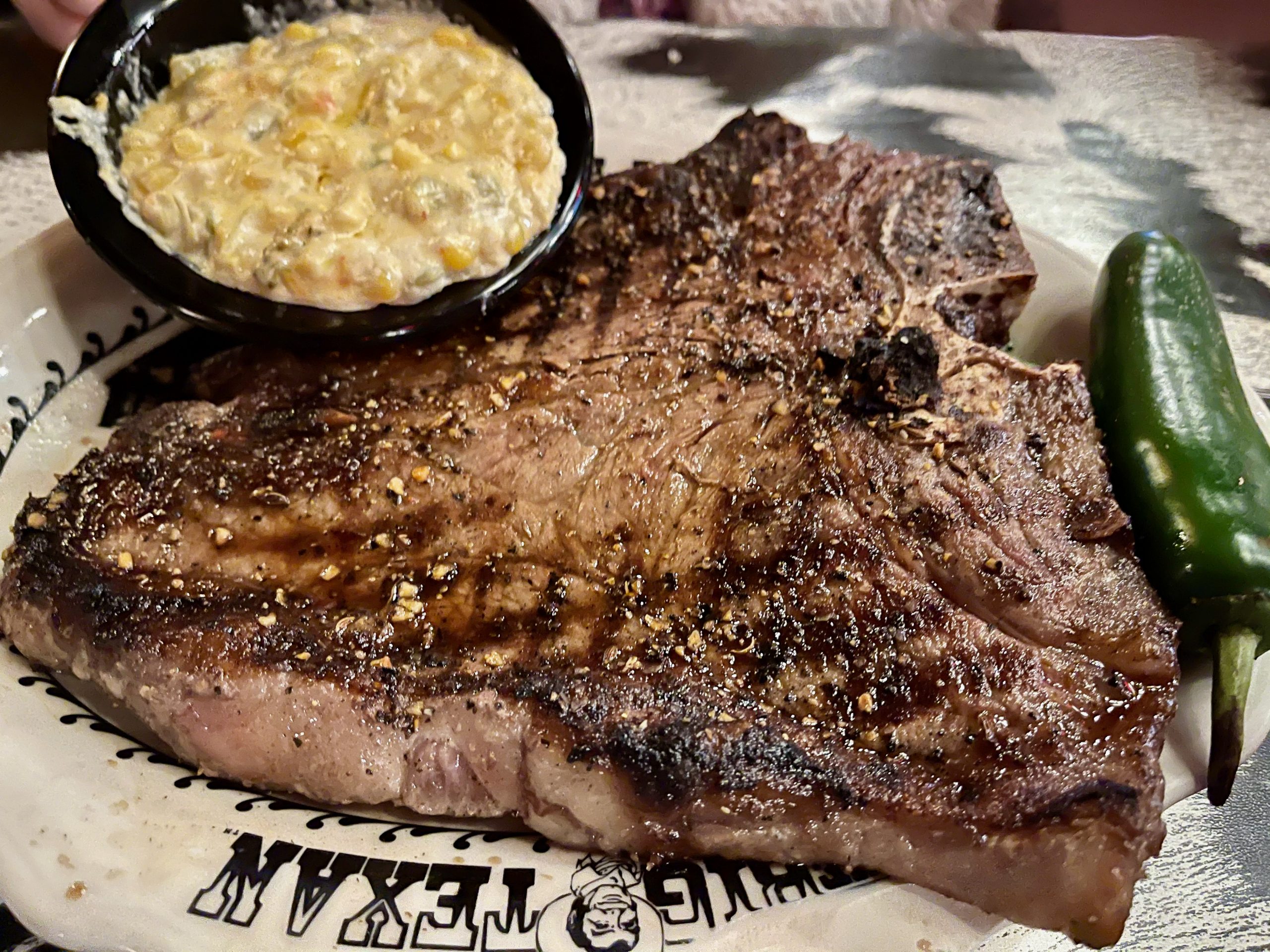 If you’ve ever wondered about the meaning of the line “I’ll be lookin’ for eight when they pull that gate” in George Strait’s classic hit Amarillo By Morning, here’s a theory you probably haven’t heard.  The country crooner was actually looking for eight brawny guys to help him finish the 72-ounce steak at Amarillo’s The Big Texan Steak Ranch.  Seriously it might just take a few of your most hungry friends to tackle that behemoth slab of beef–four and a half pounds of well-marbled meat with a deep, rich flavor and mahogany color.

Since its launch in 1960, The Big Texan has thrown down the gauntlet to all comers with Texas-sized appetites: finish the 72-ounce Steak Dinner Challenge–shrimp cocktail, baked potato, salad, roll with butter and of course, the 72-ounce steak–in an hour and you don’t have to pay for it.  Fail to complete the challenge and you’ll have to pay the entire $72 cost.  You might  be surprised at just how many hearty diners have bested the challenge.

None, however, are as formidable as Molly Schuyler, a 120-pound woman from Nebraska who devoured not one, not two, but three 72-ounce steak dinners in 20-minutes back in 2019.  That’s thirteen-and-a-half pounds of meat, never mind the sides.  Schuyler, a competitive eater by the way, holds the world record by consuming 501 chicken wings.  Most of us aren’t inclined to such carnivorous cravings nor are we equipped with bottomless stomachs.

Should you decide you wish to attempt the 72-ounce steak challenge, all you have to do is apprise your server. You’ll then be escorted to a table on a small stage at the front of the humongous main dining room where, in full view of everyone wanting to be entertained, you can try your level best to consume the steak while large digital clocks above the grilling station constantly remind you how quick an hour can go by.  Consume the 72-ounce steak and all the trimmings that go with it in that one hour and the steak is free.

Unless they’re seated in close proximity, most diners don’t pay much attention to the 72-ounce steak challenge.  They’re busy enjoying their own sizzling slab of beef, most of us normal humans content to finish a “mere” 16-ounce portion.  More than half a million people a year crowd into the capacious dining room which seats about 300 people in relative comfort.  Even before you step into the dining room, the aroma from the grill will make your mouth water and maybe, just maybe inspire you to contemplate for a moment or two, taking that 72-ounce steak challenge.

Though it may seem The Big Texan is more about show than substance, it’s actually a very highly regarded steak restaurant. In 2013, viewers of Bob Phillips’s Texas Country Reporter voted the Big Texan the “No. 1 Steakhouse in Texas.”  In the Lone Star state where beef is king, The Big Texan placed fourth on Big 7 Travel’s list of the “25 best steaks in Texas.”   It made MAXIM Magazine’s list of Top 10 Steak Houses in America.  Numerous other accolades and honors have been earned over the years.

In all honesty, there is a circus-like element to The Big Texan experience. Throughout Amarillo youll espy long-drawn billboards beckoning you to visit the home of the 72-ounce steak challenge.  The tallest of all, stationed on the frontage road in front of I-40 depicts a lanky cowboy in western regalia.  Everyone who’s ever traveled I-40 going east toward Oklahoma has seen the famous cowboy and perhaps marveled at the commodious bright yellow edifice with blue trim that beckons “The Public is Invited.  Come One and All.” A large statue of a hefty bull in front of that edifice advertises the “free” 72 oz. steak.”

The main entrance offers several options.  To your left is The Big Texan gift shop replete with signature items such as the homemade steak seasoning, and “hot sauce hotter than the Texas heat!” “From cowhide bags to six-foot longhorns mounts,” the gift shop has “every piece of Texas you could imagine.”  Straight ahead as you walk are an ice cream shop and a bar.  You just might want to have ice cream before your main meal because there’s no guarantee you’ll have room for ice cream afterward.

Step into the palatial two-level dining room and the bovine theme seems pervasive in the decorating. Covering every very one of the long community tables is a black and white cowhide pattern.  Mounted on the walls bisecting the dining room is the work of an army of taxidermists–wildlife (especially deer) hang overhead.  Also on the wall are longhorn mounts with some horns spanning six-feet.  For those of us most interested in the source of the intoxicating aromas, the dining room’s cynosure is the grill area where steak chefs are dutifully preparing steaks to your exacting specifications.

Whether you’re perusing the menu or enjoying your meal, you’re likely to be visited by a wandering troubadour crooning country favorites.  Predictably you’ll hear George Strait’s Amarillo by Morning at least once.  My Kim requested Tennessee Whiskey hoping for a rendition similar to Chris Stapleton’s.  Let’s just say the mask may have interfered with the singer’s version sounding like Stapleton’s.   Still, it’s a nice departure from piped-in muzak.

There’s a brand of Southern hospitality unique to Texas.  It’s called “Texas friendly,” a mix of kindness, warmth, and respect.  Cecilia, our server, exemplified Texas friendly.  With an utterly charming Texas drawl, she guided us through our meal, providing sage recommendations and regaling us with tales of eating feats that would put a bear preparing for hibernation to shame.  She was quick to replenish our empty cups and to clear the table so make room for more food.

While we were perusing the menu, Cecilia ferried over a basketful of fluffy bread rolls.  Pads of butter in their wrappers were already well positioned for our pleasure.  The bread rolls are light, soft and slightly sweet, just beckoning for butter.  These are the type of rolls you’d want to enjoy by the dozen, but do so at your own peril because any more than two and your appetite may be compromised.

The Big Texan menu is a celebration of carnivorous excess.  Sure you can have fried mushrooms, fried pickles, onion rings, deep-fried jalapenos, even Rocky Mountain oysters (they’re not seafood) and there are rumors that somewhere on that menu you’ll find a salad, but no self-respecting Texan will admit to having ever ordered one.  No, my friends, this is all about magnificent meats: baby back ribs, chicken fried chicken, chicken fried steak, half-pound burgers, half-pound buffalo burgers…and this is before you even reach the steak section of the menu.

First on the carnivorous compendium is a 48-56 ounce tomahawk ribeye.  Then you’ll find steak quesadillas, a 16-ounce Big Texan strip and three top sirloins, ranging in size from eight- to 21-ounces.  Ribeyes, T-bones and a Porterhouse range from adult-sized (12- to 16-ounces) to “OMG, is that a full roast?”.  Among the latter is a 36-ounce ribeye.

Because I’m not nearly as enamored of steak as she is and would, in fact, just as soon have two baked potatoes and no steak, my Kim once actually declared that my “man card” should be pulled.  She recanted that declaration in seeing the 16-ounce prime rib  that hit our table.  Prepared at medium-rare, it had the characteristic reddish hue of prime rib at my preferred degree of doneness but no bloodiness.  Slowly roasted, juicy, very tender and seasoned nicely, it was as good a prime rib as I’ve had in a while even though the house horseradish sauce was a bit on the wimpy side.  My preference is always for prime rib with a little “bark” on the edges.  There was no bark on my prime rib, the only thing missing in an otherwise nearly perfect prime rib.

For my carnivorous consort only a Porterhouse would do.  The Big Texan’s version weighs in at 24-ounces, a pound and a half of “hanging off the edge of the plate” meat.  Combining a tender filet mignon with the umami-rich New York strip, the Porterhouse is two cuts in one.  With a nice sear on the outside displaying restaurant-style diamond grill marks in all their glory, it’s a beautiful cut.  The filet is less flavorful, but much more tender while the slightly tougher strip steak is resplendent in its beefy flavor.  Both are reasons enough to visit The Big Texan.

It might be sacrilege to declare that there is one item on the menu better than The Big Texan’s magnificent meats.  That would be the chocolate cake, described on the menu as “4 Layers of chocolate insanity with whipped cream.”  After all we ate, there was no way we could put more than a two-forkful dent on this behemoth slab of decadence, but we polished it off for breakfast the following day.  It’s a Texas-sized cake made from a darker chocolate blend and it’s absolutely terrific.

Despite the circus-like atmosphere, The Big Texan is serious about its steaks.  Unless you’re an avowed vegan or vegetarian, it’s a must-stop on any visit to the Texas Panhandle.