Skip to content
AlbuquerqueAmericanBreakfastBrunchClosed in 2017Dog FriendlyGone But Not Forgotten 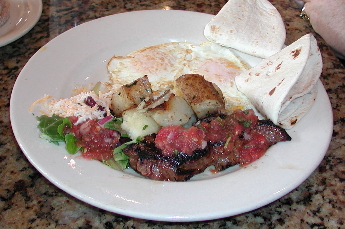 When you’re alone and life is making you lonely
You can always go – downtown
When you’ve got worries, all the noise and the hurry
Seems to help, I know – downtown
Just listen to the music of the traffic in the city
Linger on the sidewalk where the neon signs are pretty
How can you lose?

Just a few years ago, the lyrics to Petula Clark’s January, 1965 number one single, would not have been used to describe Albuquerque’s downtown area. In fact, the downtown area was more ghost town than boomtown except for during weekday business hours and late night at bars.

Even in September, 1998 when Sarah Brown launched the Gold Street Caffe in a historic building circa 1911, the notion that Albuquerque’s downtown would become a social, economic and cultural hub might have been met by skepticism save for the unwavering optimism of visionaries who recognized the area’s potential beyond its historic attachment to the Mother Road, Route 66. In March, 2006, Sarah sold her restaurant to general manager Matt Nichols whom Duke City diners might remember as the former owner of the defunct Fajitaville, a restaurant perhaps ahead of its time.

Today, the downtown area has become a veritable gold mine and since its launch just over a decade ago, the Gold Street Caffe has been one of the best reasons to go downtown. It’s also one of the best indications that downtown revitalization is working. If you’re prospecting for breakfast, there’s no need to look further.

The Gold Street Caffe has been, practically since its inception, one of the very best places in town for breakfast. During weekends diners tend to be more hip and trendy and more likely to be bedecked in nose rings and tattoos than in affluent finery. During weekdays, it’s Albuquerque’s movers and shakers who hold court in a restaurant whose architectural style, energy and personality would fit in nicely in Soho. Note: These dining trends aren’t absolutes, just observations I’ve made. The point is, the Gold Street Caffe has a very broad appeal.

It’s an appeal that transcends demographics and socioeconomic strata. The commonality among the throngs is that they all love the Gold Street Caffe and don’t mind the inevitable wait to be seated. Because of overflow crowds, smaller dining parties may be asked to share a large table, but no one really minds. No one is a stranger for long at this restaurant, especially for breakfast when it’s not uncommon for close-proximity tables to inspire conversation. What are they talking about? Probably the special of the day, maybe the pancakes.

What makes breakfast at The Gold Street Caffe so special? Perhaps it starts with the honey-chile glazed bacon which might define porcine perfection. Just ask readers of the Alibi news magazine who perenially accord “best of” honors to that bacon during annual polls. An enterprising Washington, D.C. chef has, in fact, arrived at the realization that bacon is an aphrodisiac and hosts very popular monthly Pork and Pinot dinners. Here’s hoping the Gold Street Caffe follows suit with its one-of-a-kind bacon.

It also wouldn’t be breakfast at the Caffe without Sage Bakehouse toast (whole wheat, sourdough or farm bread) with butter and jam. The Sage Bakehouse is a Santa Fe institution crafting the staff-of-life to a golden hued perfection. The Gold Street Caffe toasts it lightly, just enough to melt the butter. What makes the sourdough special is that you can actually taste the sour dough; it’s not just a name.

You’ll also strike a rich vein with the Caffe’s Sooo Good Buttermilk Pancakes–fluffy orbs made from scratch and served with real creamery butter and Vermont syrup (the best syrup in town). Whether you have a short stack or a tall stack, there are few pancakes to compare to these. A “short stack” is three pancakes almost big enough to cover the entire plate. A “tall stack” could feed a small, developing nation. You can also add blueberries or bananas for a pittance, but they’re wholly unnecessary.

According to Saveur magazine, an estimated 90 percent of Americans have never tasted real maple syrup. Most breakfast syrup consumed in America, Saveur claims, is “of the high-fructose corn variety dressed up with caramel color to make it look like the real stuff.” Real maple syrup makes a difference, especially when the pancakes are exceptional to begin with as the Gold Street Caffe’s pancakes are.

24-carot satisfaction is available with Eggs Eleganza on Brioche (pictured above), two poached eggs atop inch-thick toasted green chile brioche upon which local goat cheese is spread. This elegant extravagance also includes fresh chopped herbs and lovely cherry tomatoes. The Caffe seems to specialize in poached eggs, preparing them as well as any restaurant in which I’ve ever had them. For a mere pittance you can also add a delicious, pink grilled salmon.

Another entree showcasing the best poached eggs in town is a weekend special called Southwest Eggs Benedict, the Caffe’s interpretation on the classic breakfast dish first created in New York City’s Waldorf Astoria more than a hundred years ago. It’s a liberal interpretation, but one which honors the traditional version. Instead of the traditional English muffin base, the Gold Street Cafe starts with two of its fabulous green chile cheese biscuits atop of which are stacked slices of the legendary honey-chile glazed bacon, two perfectly prepared poached eggs and a jalapeno Hollandaise sauce.

I’ve longed contended that it should be illegal for any New Mexico restaurant serving Eggs Benedict not to embellish its Hollandaise sauce without green chile, but jalapenos aren’t far off the mark—especially when this dish also includes green chile cheese biscuits and red chile-honey glazed bacon. This triumvirate of pleasant piquancy makes this my very favorite Eggs Benedict dish in town. In its annual Food & Wine issue for 2012, Albuquerque The Magazine awarded the Gold Street Caffe a Hot Plate Award signifying the selection of its Southwest Eggs Benedict as one of the “most interesting, special and tasty dishes around.” Considering the thousands of potential selections, to be singled out is quite an honor.

Setting a gold standard are the Caffe’s Gold Street steak and eggs. If fault can be found with this entree, it might be that the six-ounce marinated and grilled sirloin steak will leave you wanting more. You might feel cheated at how quickly this savory steak disappears from your plate. Fortunately, you’ll be consoled by two eggs (any style), herb-roasted potatoes, Cheddar-Jack cheese, fresh salsa and warm flour tortillas (or you can substitute Sage Bakehouse toast).

The menu also includes “the best breakfast burrito” (the entree’s name, not necessary my assessment), a warm flour tortilla generously stuffed with fresh scrambled eggs, cheese and roasted potatoes smothered with your choice of the restaurant’s signature red or green chile. While that sounds like pretty standard fare for New Mexico’s favorite breakfast dish, under the masterful hands of the kitchen staff at the Gold Street Cafe, this breakfast burrito just might be the best part of waking up.

That is, unless you order the Gold Street Caffe Belgian Waffle, in which case you might consider that the restaurant’s best waker-upper. As with the aforementioned pancakes, the waffles are served with real creamery butter and pure organic maple syrup as well as fresh seasonal fruit, apples and cinnamon or apricots and brown sugar.

Restaurant owner Matt Nichols, a graduate of the California Culinary Academy did his own bit for downtown revitalization by changing the restaurant’s menu so that lunch wasn’t so focused on salads and sandwiches and opening it up for dinner starting in March, 2004. Lunch and dinner menus include such starters as Dungeness crab cakes and flash-fried calamari and entrees such as fish tacos and enchiladas.

Our inaugural dinner experience–shortly after dinner became part of the restaurant’s repertoire–was as disappointing as our breakfast excursions have been memorable. I have it on good authority from the Albuquerque Journal’s luminous restaurant critic Andrea Lin that dinner is now much improved. If the quality of dinner approximates that of breakfast, we’ve got another reason to go downtown.

In 2008, Nichols launched a sister restaurant to the Gold Street Caffe. Situated along the Pan American frontage road area within easy walking distance to the Century 24 theater, The Cup offered many of the favorite breakfast, lunch and dinner specialties that have made its elder sibling a popular draw. Alas, what it couldn’t offer was the funky vibe its sister possesses in droves. The Cup closed within a few months.