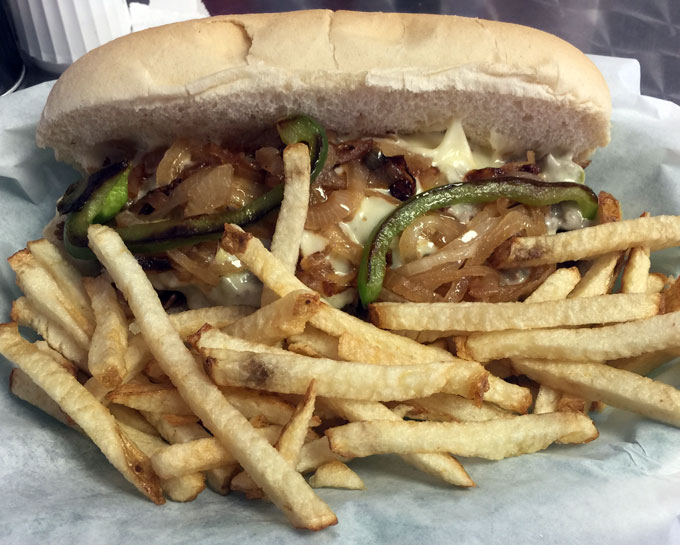 “But it’s a dry heat.” You’ve probably seen that slogan emblazoned on tee-shirts depicting a sun bleached skeletal figure lying prostrate mere feet from a thirst-slaking, life-giving oasis. You’ve gratefully expressed that sentiment every time Channel 13’s manic meteorologist Mark Ronchetti (or better yet, the pulchritudinous Kristen Currie) predicts yet another day of 90 degree plus weather as you rationalize that you could be in one of the South’s sweltering, sauna-like cities with temperatures comparable to our Duke City, but with 80 percent humidity. You may even have muttered that phrase while scalding your feet as you scurry to a swimming pool the temperature of bath water.

For years, Albuquerque spelled relief from the oppressive heat “I-T-S-A” as in Itsa Italian Ice, a veritable oasis of cool refreshment on scalding New Mexico summer days. Itsa was situated in a Lilliputian locale at Lomas and Washington, offering drive-up service for cavalcades of parched motorists. The specialty at Itsa was a veritable phalanx of Italian ices, a flavor or more for each color on the ultraviolet spectrum.

Unlike snow cones and other ice desserts, all ingredients–typically water, sugar and flavoring–used in making Italian Ice are blended together prior to being frozen. Italian ice is baby-butt smooth and soft while snow cones have a granular, crunchy texture and the flavoring is added afterwards. Most Italian ice is made with sugar, not corn syrup and has neither fat nor milk products. It is far more refreshing than ice cream, gelato, snow cones or shaved ice. It is the paragon of frozen pleasure.

Much to the dismay of Duke City heat-stroke candidates, Itsa Italian Ice shuttered its doors in 1996, a year after we moved back to Albuquerque. Though you could still find Itsa products on the frozen food aisles at some grocery stores, it just wasn’t the same experience as rolling down your window to place your order and experience glorious heat relief and blissful, flavorful, sweet satisfaction seconds later.

In 2006, Steve and Cathy Garcia purchased Itsa and procured a refrigerated trailer they could ferry to outdoor events throughout the dessert-dry Duke City. Three years later they actualized their vision for a brick and mortar Italian ice business by launching Itsa Italian Ice on the corner of Second and Phoenix, N.W., two blocks north of Menaul. The facility isn’t set up for drive-up service, but you’ll want to take a seat and linger for a while at the 50s themed full-service restaurant where now you can get not only your favorite Italian Ice, but hamburgers, hot dogs, corn dogs, a Philly cheese steak, hand-cut French fries, Frito pies, Frontier cinnamon rolls and more.

In February, 2015, Itsa Italian Ice was renamed Philly’s N Fries. It’s not everyday a highly regarded and successful business tampers with an established brand identity, but the move was deemed necessary because (surprisingly) not everyone associated the name Itsa Italian Ice with food. Then, of course, not everyone reads Food & Wine Magazine which, in October, 2010, featured Itsa in its Trendspotting segment. No, they’re more apt to read Albuquerque the Magazine which spotlighted Itsa’s “better than Philadelphia Philly” in a feature entitled “The Ex-Pat’s Guide to Eating in Abq.” The rename has proven very successful.

The panoply of Italian ice flavors includes lemon, watermelon, cantaloupe, lime, grape, black raspberry, tangerine, cherry, banana, blue moon (cotton candy) and chocolate. The only flavor which didn’t initially survive the decade plus was Root Beer, my very favorite flavor. Fortunately, it was added to the menu in June, 2010. It’s as wonderful as ever with a pronounced adult root beer flavor–strong and peppery. Unlike some Italian Ices, these actually taste like the fruits (and chocolate) for which they are named. They are still as refreshing as a dip in a cold mountain lake.

Philly’s N Fries provides diners with a nostalgic trip back to a carefree, more innocent time before the infestation of chain restaurants. Even if you’re not old enough to remember it, you’ll appreciate the sundry bric-a-brac from the Fabulous Fifties. The Fifties theme starts with the black and white checkerboard tile of the era which blends thematically with the red and white kitchen-style chairs, brushed chrome tables, refurbished Conoco gasoline pump and on the northwest corner of the restaurant atop a vintage Pepsi machine, a bulky, boxy period era television set.

Although prices are hardly reminiscent of the 1950s (or 1996 for that matter), there are good meal deals on the menu. Hamburger and hot dog combo meals (French fries and a soft drink with unlimited free refills) are a good bet for cost conscious consumers. A regular ice goes for $2.50 while a large will put a slight dent in your wallet for two dollars more. Still, this is Itsa Italian Ice we’re talking about and it’s worth it!

Philly’s N Fries doesn’t offer table-side service. Cathy and her perpetual smile are ready to take your order at a counter and she’ll deliver it to your table when it’s ready unless long lines prevent her from leaving her post (in which case, you’ll be called up to pick it up). If there’s one thing reminiscent of the 50s (from what I’ve heard), it’s the service–friendly, accommodating and pleasant. The service is enough to bring me back. Steve, Cathy and their daughter Desiree are among the most friendly restaurateurs in the Duke City.

9 February 2018: Philly’s N Fries may be just as adept at satisfying the pangs of hunger as it is refreshing your thirst and you won’t go away hungry. That’s especially true if you order the double-meat green chile cheeseburger, a behemoth by any measure. Prepared at just a shade beyond medium, the beef patties are thick and juicy. American cheese, lettuce, tomato and of course, green chile adorn the burger. This green chile cheeseburger is one of my Kim’s favorites, but occasionally a burger so good she actually eschews the green chile Philly. The green chile not only has the piquancy New Mexicans love on their favorite burger, but it’s got a nice flavor and the restaurant doesn’t scrimp on it.

The French fries are crisp inside and out, almost as if they’re fried twice in very hot oil. These fries are fresh and hand-cut on the premises. In a city in which most restaurants serve frozen French fries out of the bag, these fresh not-quite-shoestring thin fries are a welcome change. You’ve got to order a combo meal (sandwich, fries and a drink) because a Philly without fries is like a day without sunshine.

2 May 2009: Being a 50s themed restaurant, it’s only fitting that Philly’s N Fries offer a hot dog that was actually around in the 1950s. Nathan’s Famous were first seen on the Coney Island boardwalk in 1916. Not only have they stood the test of time, they’ve expanded nationwide and are available in grocery stores and food courts everywhere. Despite being ubiquitous, Nathan’s hot dogs are a take it or leave it proposition with as many aficionados as there are detractors. At Philly’s N Fries these fat all-beef dogs are griddled to a crispy exterior. They’re browned outside but retain their juiciness inside.

During our inaugural visit, we overheard Steve tell a customer that Philadelphia natives who ordered Philly’s N Fries Philly Cheesesteak compared it to the one offered at Pat’s King of Steaks, arguably the City of Brotherly Love’s best cheesesteak. I dismissed that as pride of ownership until Sean O’Donnell (the very entertaining former KOB FM radio personality), a Pennsylvania native, told me he was “ecstatic” about finally finding “a place in town with a decent Philly Cheesesteak,” “a big deal for a PA transplant.” Considering Sean has steered me toward other great dining destinations, I place a lot of stock in his recommendation.

9 February 2018: It’s a well-founded recommendation. the Philly Cheesesteak is terrific! Sweet white onions are grilled to perfection, not caramelized, but on that fine line between being crispy and soft. Green peppers are grilled to a slightly crunchy consistency. Two slices of white American cheese are arranged on each sandwich and it’s a wonderfully creamy and nice melting cheese. The meat is chopped thin on the grill (a melodic percussion) and is seasoned well; you won’t find any fat or sinew anywhere. The bread is a soft receptacle for the contents and is quite good. This isn’t a huge sandwich except in terms of flavor. No matter what you might read in “# of Visits” below, you can probably double that number. This is my very favorite sandwich in the Land of Enchantment. Nine visits out of ten, it’s what I’ll have at Philly’s N Fries.

17 December 2015: The only Philadelphia cheesesteak better in Albuquerque is the restaurant’s Green Chile Philly, a Philadelphia cheesesteak with New Mexican green chile. Green chile makes everything taste better, especially when the chile has a piquant bite. My friend “Señor Plata,” an aficionado of the Philadelphia cheesesteak ranks this sandwich even higher than his previous favorite at the now defunct Petito’s Pizzeria in Rio Rancho. The biggest difference, in his estimation, is the steak itself which isn’t shaved sliver-thin as at Petito’s. It’s also not quite as lean which generally means just a bit of fat for flavor. A Los Angeles native, Señor Plata has had the very best cheesesteak sandwiches America’s second largest city has to offer and he rates Philly’s N Fries higher.

17 December 2015: Not that very long ago, a chicken Philly would have been considered sacrilege, especially in the City of Brotherly Love where the Philly cheesesteak originated. Today, chicken Phillys are ubiquitous throughout Philadelphia. It stands to reason that persnickety, variety-oriented diners would want a non-red meat option and chicken, after all, is the other white meat. As with the more conventional steak-laden Philly, the chicken is finely chopped (it’s a wonder Steve doesn’t have carpal tunnel syndrome) and is available with green peppers and sweet white onions. Risking the guilt of betrayal for not having our beloved cheesesteak, my friend Bill Resnik and I were inaugurated into the chicken Philly option in December, 2015. The date is significant because it’s the day we found a viable alternative to the sacrosanct cheesesteak.

Dessert offerings include the aforementioned Italian ice as well as an old favorite, the Nutty Buddy. Philly’s N Fries also carries the fabled Frontier rolls, those hot, buttery, gooey rolls of pure deliciousness with a cinnamon sugar glaze. They pack a day’s worth of tooth-decaying, waist-expanding calories, the kind you love to consume. Among the very best cinnamon rolls in the Land of Enchantment, they’re worth the extra time at the gym.

Italian Ice–it’s a refreshing, fat free, non dairy dessert that’s an Albuquerque tradition now energizing and winning over yet another generation of thirsty, overheated residents. The green chile Philly cheesesteaks are the very best in Albuquerque (certified by experts like Sr. Plata) and the service is warm and hospitable.