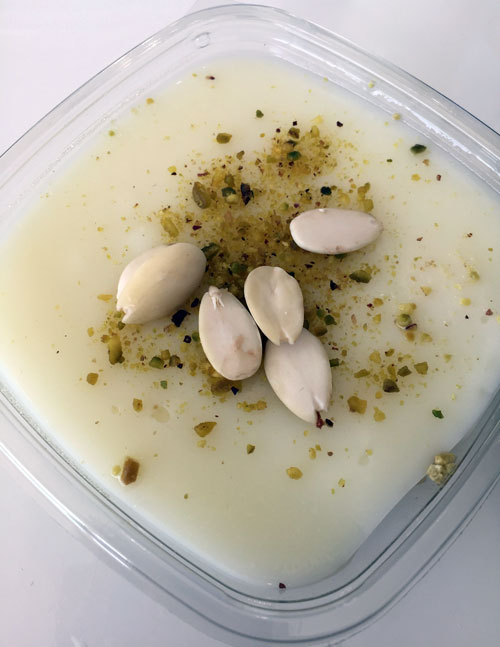 How can you not love a culture in which there are numerous beautiful expressions associated with hospitality and with families welcoming guests to join them for a great meal? When it comes to warmth and hospitality, few cultures embody it so richly and genuinely as the Lebanese. Similarly, when it comes to utterly delicious food prepared with love and served in generous portions, the Lebanese culture may be unequaled. One of the most treasured blessings of having grown up in the small mountain community of Peñasco was sharing many meals with first-, second- and third-generation expatriates from the beautiful country of Lebanon.

The wonderful SBS Website, an exemplar of culturally-relevant Australian media content explains “Lebanese hosts will never believe you don’t have just a bit more room for something utterly delicious that’s been prepared with love. In a Lebanese household, food is life and sharing it is one of the great joys of being alive. Even for simple dinners at home, there are a variety of dishes on the table, the meal starting with small portions known as mezza, which centre around dips and salads. They may be as simple as simple as pickled or raw vegetables, and bread or an entire meal consisting also of meat kebabs, grilled, marinated seafood, salads and desserts.” Regardless of your own culinary culture, you’ve got to love that.

Thanks to our Lebanese neighbor Jeanette Owen, I experienced and enjoyed such Lebanese delicacies as fattoush, tabbouleh and kibbeh as a young sprout — long before your once naive and callow blogger experienced Asian cuisine of any type. To that point, the only non-New Mexican or Mexican dishes to have crossed my lips before the Air Force sent me to the Boston area were lasagna, spaghetti and pizza. Despite my own Spanish heritage, a tapa was solely a lid on the top of a jar. The foods of the exotic Indian subcontinent may as well have been extraterrestrial cuisine. From among the fifty best dishes in the world, I can tick off having experienced only ten (and who hasn’t had popcorn, potato chips, chocolate and donuts) before my nineteenth birthday. Heck, I didn’t partake of a McDonald’s burger until well into my teens. But I knew Lebanese cuisine.

If you’re wondering why Lebanese decided to settle rural, agrarian communities in the Sangre De Cristos, Pete Sahd, patriarch of one of the most wonderful families I have been blessed to know, often spoke of how much the mountain villages of Northern New Mexico resembled the cedar-rich mother country. The progenitors of many of New Mexico’s Lebanese immigrants left Lebanon during the repressive Ottoman Empire, the main exodus occurring in the late 19th and early 20th centuries. Escaping persecution and poverty, some arrived with nothing but aspirations, dreams and hopes. The frontier territory of New Mexico was replete with opportunity (and the prospect of freedom) for them.

Like their Phoenician forefathers had done, many of them began as door-to-door peddlers, many eventually launching trading posts or general stores in the small villages in which they settled. The “Arabes” as they are sometimes still called by Hispanics were (and still are) hard workers, shrewd businessmen, community-minded and family-oriented. They fit right in with the tight-knit Hispanic communities which shared similar values–so much so that Los Arabes of New Mexico, a wonderful book written by Monika Ghattas is subtitled Compadres From a Distant Land.

In the vernacular and tradition of Hispanic Northern New Mexico, few–if any–titles were held in such esteem and reverence by elder generations as “compadre” (male) and “comadre” (female). In his Dictionary of New Mexico & Southern Colorado Spanish, Ruben Cobos defines a compadre as a “ritual co-parent; a term by which godparents address the mother and father of their godchild and by which the child’s parents address the godmother and godfather.” That’s the esteem to which many of the Arabes were…and still are held today. My mom’s best friend Patty Sahd was a third grandmother to the Garduño children. We love and miss her very much.

When my friend Bruce “Sr Plata” Silver and I stepped into Bayti Mediterranean, I wondered if we would experience the type of hospitality and warmth shown by Lebanese compadres and comadres in Peñasco. We were greeted warmly by Raquel who immediately discerned our confusion. Bayti is not a restaurant per se. It’s akin to a deli in which food items are apportioned into containers, displayed under glass in a deli case and sold by the pound. Though take-out accounts for much of its business, Bayti also has a handful of tables in which diners can enjoy their meal on the premises. Raquel, our hostess, was a gracious, knowledgeable and perpetually smiling presence who explained all the dishes as if she’d been raised on them (though she had never had any of them, having grown up in Mexico). As in Peñasco, it was delightful to speak Spanish while enjoying Lebanese food.

About halfway through our meal, managing owner Feryal Zantout, a statuesque beauty walked in and introduced herself. She explained the concept behind Bayti is to serve fresh and healthy Mediterranean cuisine from Lebanon and that Bayti is a Lebanese word for “my home.” The dot atop the “i” in Bahti is actually a Lebanese cedar, a symbol on the Lebanese flag. Hoping to remain true to Lebanese cuisine, at present New Mexico’s ubiquitous green chile is not to be found in any item on the menu though Feryal admitted several guests have suggested it. True to everything you’ve ever heard about Lebanese hospitality, Feryal saw how crowded our table was, discerned we had just a bit more room for something else and brought us a plate of Mujaddara, a traditional vegetarian Lebanese dish made with lentils and rice, and garnished with caramelized onions. She’s very proud of all the culinary fare at Bayti–and with good reason.

One of the items on our crowded table was Baba Ghanouj, a roasted eggplant dish made with tahini (a paste made from ground sesame seeds) and garlic. Baba Ghanouj is one of those terms people just love to say, but most don’t know the genesis of the term. It’s actually an Arabic term translating to “pampered papa” or “coy daddy” and is said to refer to the supposed invention of this very popular Lebanese staple by a member of a royal harem. Bayti’s version is outstanding, one of if not the best in Albuquerque. It’s easily Sr Plata’s favorite from among the dozens we’ve shared in Duke City restaurants. With a thick and creamy consistency and a smoky flavor, it practically beckons for pita, another item Bayti prepares very well.

The gods of Mount Olympus may not actually have blessed humanity with ambrosia, nectar and dolmas, but many Middle Eastern nations believe stuffed grape leaves had to have been divinely inspired. Unfortunately because rolling the grape leaves can be very tedious, some restaurants across the Duke City serve canned dolmas. Don’t count Bayti among them. Bayti’s dolmas are hand-rolled and far (by several orders of magnitude) superior to their canned counterparts. Sr Plata noted the absence of overly acidic brine on these dolmas, rendering them much more pleasant than some which can be lip-pursing. These dolmas are served cold, are stuffed with short grain rice, tomato, parsley, onion ,mint, olive oil and lemon and seasoned liberally. In Lebanon, dolmas are called Warak Arish, but that term isn’t quite as familiar.

While most of our meal consisted of tapas-like smaller dishes, our main entree was a whole roasted chicken. Raquel explained that the chicken is seasoned with eight different spices. Most discernible were cardamom, sumac, pepper, salt and cumin. Raquel expertly cut the chicken into pieces for us and we hungrily extricated the moist, juicy and delicious white and dark meat, leaving only a carcass of defleshed bones. It was gratifying to find a whole roasted chicken as many restaurants tend to serve half portions (thigh, leg and breast). Moreover, we were happy to find poultry this succulent and enjoyable.

Inexplicably, the notion of pizza for breakfast (and I’m not talking about frittata here) hasn’t caught on as much as some of us would like. Usually when you mention breakfast pizza, you’re usually talking about pizza left over from the night before and consumed in the morning for breakfast. In Lebanon, the notion of pizza for breakfast is a welcome one. In fact, the national breakfast dish of Lebanon is a pizza of sorts—and not one left over from the previous night. It’s called Zaatar Maoushe. There are two essential elements to this street food staple: Maoushe and Zaatar. Maoushe is the baked dough, typically having a crispy exterior and a warm, chewy interior. Zaatar is the key topping, or rather the combination of toppings, atop the dough. Zaatar is an herb that grows abundantly in the eastern Mediterranean, but on this pizza dish, it’s combined with other spices such as thyme, marjoram, sesame seeds and even sumac. The result is a delicious “pizza” sans tomato sauce, cheese and other ingredients popular across the fruited plain. If you’re tempted to try replicating this terrific find for breakfast at home, you’ll be happy to read that Bayti sells a pre-packaged mix.

Bayti offers a number of stuffed pastries, some (chicken rolls and beef rolls) resembling Mexican flautas or maybe even Chinese egg rolls and others (small beef pastry, small chicken pastry and small spinach pastry) resembling savory empanadas. The small beef pastries at Bayti are stuffed with ground beef, peas and carrots. More than any other item we enjoyed at Bayti, we found these pastries just a bit on the dry side. These pastries would benefit greatly from a dipping sauce of some sort. Regrettably Sr Plata and I had devoured most of the baba ghanouj, but the little we had left was a perfect foil for the soft, warm dough and its content. These are best served warm.

One of the glories of adulthood is being able to eat dessert first. Who needs to “save the best for last” when you can have the best first. That was my approach with Bayti’s rose pudding (Mahalabia), a sweet Arab dessert made of milk and sugar, thickened with cornstarch, laced with rose water and topped with ground pistachios and almonds. Rose water, flavored water made by steam-distilling crushed rose petals to obtain their essential oils, not only lends a floury bouquet, it imparts a sweet floral flavor to the pudding- (or flan) like dessert. Rose water has been used in desserts for centuries across the Middle East and was originally a by-product of rose perfume. A little goes a long way. Thankfully Bayti’s kitchen uses it judiciously—in perfect proportion to concoct this mysterious dessert.

There’s another Arabic expression often uttered at the conclusion of a great meal. It’s “Sallem Dayetkoom” which translates to “God bless your hands.” It’s said to the cook as a compliment for an excellent meal. To Feryal and Raquel, here’s a hearty Sallem Dayetkoom” from Sr Plata and the nmgastronome. We hope to enjoy your magnificent hospitality and wonderful food again and again.