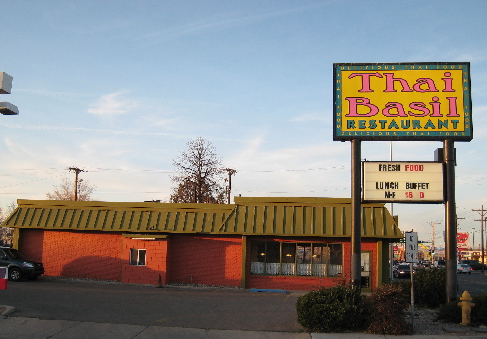 As one of the most popular culinary herbs in the world, basil is a richly aromatic, slightly spicy ameliorant to many of the best dishes proffered at all Thai restaurants.  Also known as “hairy basil” and by its Thai name of “horapa”, it is used in salads, soups, curries and as a garnish.

The aroma of Thai basil is stronger and sweeter than its Italian counterpart and it has a peppery flavor slightly reminiscent of star anise.  Vietnamese cooking also relies heavily on Thai basil.  It’s no wonder so many Thai restaurants across the country are named for this diverse and revered herb.

Albuquerque’s Thai Basil restaurant launched in 2004 on the site of the popular Thai Kitchen which closed earlier in the year.  Owned and operated by California transplants well versed in the art of Thai cuisine, it quickly established a reputation as one of the city’s best new restaurants.

The Thai Basil restaurant is perhaps more sparsely decorated than other Thai restaurants in town, but what festoons its walls is very interesting.  Thematically, the restaurant celebrates music.  In Thailand, music has evolved dramatically over the past six centuries so that eclectic musical genres are accepted.

On one wall are five wooden figurines of a traveling musical troupe, each member carrying or playing an instrument of some sorts.  Several musical instruments–woodwinds, string and percussion–festoon the walls.

Interestingly, instead of the heterophonic (one melody but multiple voices, each playing the melody differently or in a different tempo or rhythm) music you typically hear at many Thai restaurants, at Thai Basil, it’s modern pop music that is showcased.  That music resonates from a television showing what might be described as Thailand’s version of MTV.

The tables are highly lacquered in a rich cherry-like sheen.  Both artificial and real plants of several varieties are strewn throughout the restaurant.

Thai Basil offers a daily lunch buffet.  Above the buffet station is a placard reading “Eat what you take, take what you eat”  along with the warning that you will be charged for wasting an unreasonable amount of food.  The buffet is also available for take-out provided you abscond with a “reasonable amount” of food.

The menu depicts, in two dimensions, the national symbol of Thailand–the elephant.  More than 4,000 elephants, approximately half of them domesticated, are fighting for their survival in Thailand thanks to a decline in their natural habitat, ivory poachers and even extermination at the hand of man if caught trespassing into human settlements.

Anyway, that menu features nearly two dozen lunch specials, all at very reasonable prices.  An asterisk (*) denotes hot and spicy dishes.  Diners can specify from one to ten, the level of spiciness they desire.

Fourteen appetizers are available, including beef or chicken satay which seem to be almost synonymous with Thai starters.

The Tod Munpla or deep-fried fish cakes are delicious.  Flecked with tiny green bean pieces and kafir leaves and redolent with red curry flavor, they are delicious on their own, but even better with the accompanying cucumber sauce.  The cucumber sauce is made with chopped cucumbers, cilantro and crushed cashews in a vinegary, sweet sauce.

Thai egg rolls, which tend to be somewhat smaller than their Chinese counterparts, show up on the menu in several varieties.  The one we like best are the shrimp rolls which come six to an order.  Deep fried crepes are stuffed with shrimp and avocado and are delicious on their own.  They’re served with a cloying sauce that could use some piquant additives.

Plating at Thai Basil is an art form.  Every appetizer and entree looks great in addition to generally tasting great.

For me, one of the measures of a great Thai restaurant is in how it prepares its curry dishes.  At Thai Basil, the green curry isn’t as sweet (coconut infused) as at other Duke City Thai restaurants.  It’s also far more piquant.  To be safe, I ordered it at the “eight star” degree of spiciness and at that level, my tongue was nearly seared.

The green curry is an excellent dish for showcasing the herb for which the restaurant is named.  In addition to coconut milk, green curry is crafted with bamboo shoots, green beans, squash and that olfactory arousing Thai basil.

Non-noodle entrees are accompanied by steamed jasmine rice which is shaped like a Valentine heart.  It may be a reminder of how heart healthy Thai food can be (if you order the right things, of course).

The seafood portion of the menu is intriguing as it offers entrees you won’t find at any other Thai restaurant in Albuquerque.  The wait staff delights in patrons who order such entrees as sweet and sour fish, apple trout, lemon trout or salmon curry.  These entrees, it seems, don’t ensnare as many “Occidental” diners as they do Thai transplants.

If, on the other hand, you’ve lived in the Orient in a past life and your propensity for authenticity extends to such un-Westernized tastes as the much maligned durian (the world’s most malodorous fruit), Thai Basil’s seafood entrees will definitely intrigue you.

My only disappointment with the apple trout is that the deep-fried trout isn’t marinated in the homemade green apple salsa then pan-fried together.  Instead the salsa was served on a separate plate and cold, much like a Thai papaya salad.

The trout is crispy and golden brown, albeit not a very substantial trout.  Fortunately, it is de-boned.  In addition to green apples, the salsa included onion, carrots, cilantro and jicama in a vinegary sauce.  Its taste is actually similar to papaya salad in that the dominant taste is neither sweet nor sour nor savory.  Instead, it’s a blending of several flavors that go well together, but don’t necessarily excite your taste buds.

If noodles are what you crave, Thai Basil serves some of the best Pad Thai (stir-fried small rice noodles, bean sprouts, ground peanuts and green onions with eggs) in town.

Pad Thai, which literally means Thai style frying, is the national dish of Thailand and perhaps the most popular entree among American aficionados of Thai cuisine.  In western restaurants, Pad Thai is generally covered in a red oil and can be a bit “heavy” tasting while the version typically found in the streets of Thailand is relatively dry and light.

Still, there are many ways to prepare it and you rarely experience a bad version of Pad Thai.  It’s one of the “safest” things you can order for someone who fears Thai food because it’s new and different to them.

At Thai Basil, the Pad Thai has the right combination of sweet and savory tastes and it isn’t quite as heavy as other Pad Thai we’ve experienced.

Only two desserts are offered on the menu: sticky rice with mango and Thai coconut ice cream.  With these two choices, who needs anything else.  When in-season, the mangos are sweet and juicy, a perfect complement to the coconut infused sweetness of the sticky rice.