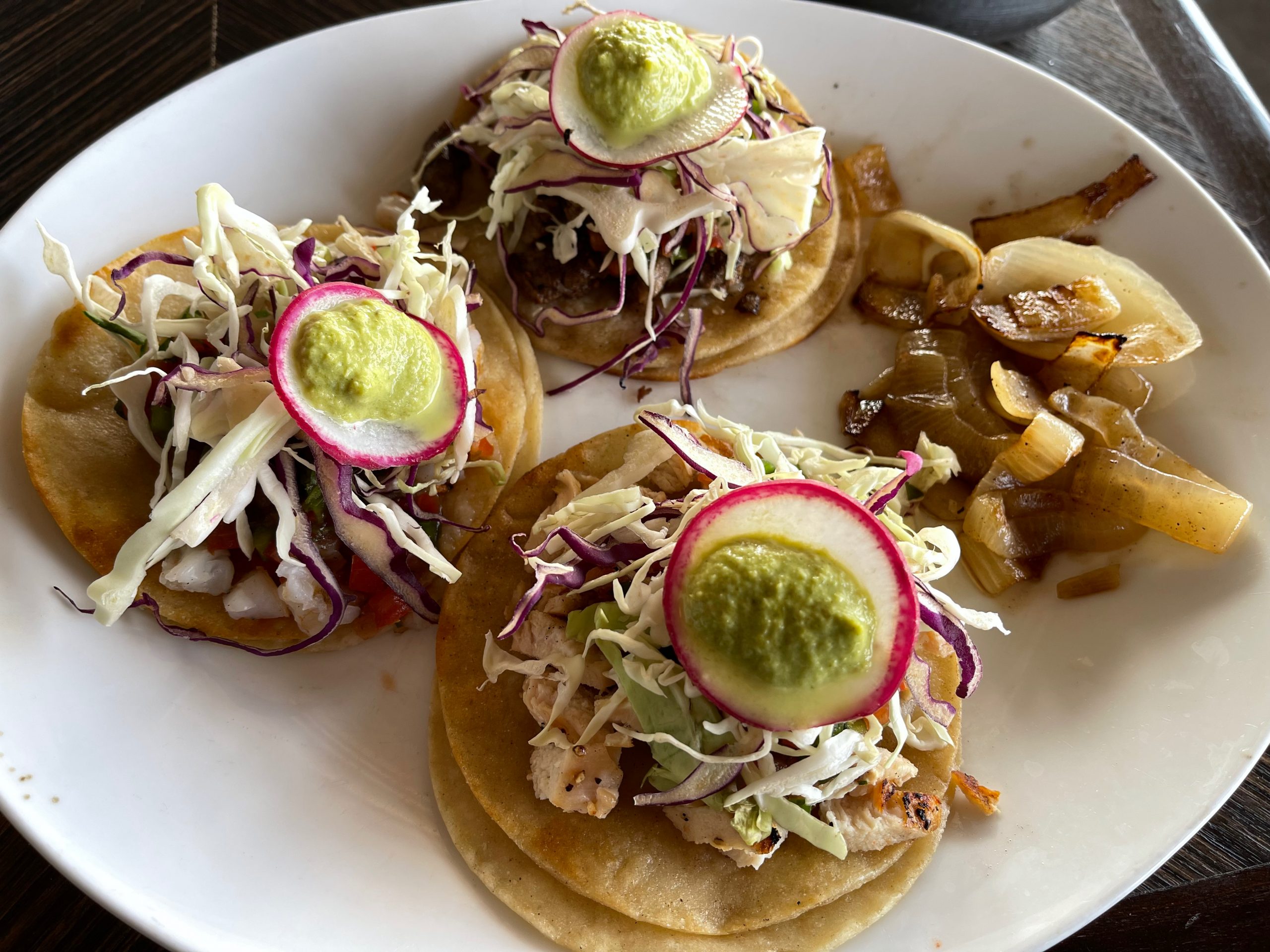 My friend Bill Resnik, a professional stand-up comedian for more than two decades, performs a bit in which he “translates” Spanish terms for linguistically challenged audiences.  “Paseo del Norte,” for example, translates to “Paseo of the Norte.” For Duke City residents, the “Northern Route” is no joke.  It’s the corridor from the Northeast Heights to Albuquerque’s burgeoning West side, ferrying nearly 100,000 vehicles a day.  Paseo del Norte is widely credited with the rapid development–from 30,000 residents in 1980 to more than 85,000 in 2006–of the city’s growth north of Interstate 40 and west of the Rio Grande.  What most city residents don’t realize is that the official Department of Transportation designation for the 25-mile passage is State Highway 423.

It makes sense therefore that a restaurant in which people connections are made daily would incorporate into its name the highway designation for the bridge (figuratively and literally) between Albuquerque’s residents.  Because of its extensive wine offerings, the word “Vintage” (as in the year or place in which wine of high quality was produce) also makes sense, ergo Vintage Four Twenty-Three, a sophisticated and trendy milieu unlike any in the Duke City.  Launched in January, 2012, Vintage has since been a source of mixed opinions with vocal supporters and detractors alike expressing themselves passionately, especially on Yelp.

Vintage 423 is the brainchild of owners Jason Daskalos and Rudy Guzman. Daskalos, a well-known Duke City developer and entrepreneur has been racing competitively since 2006 when he earned Rookie of the Year accolades in the Viper Racing League.  His love of competitive racing is apparent throughout the restaurant in the form of thematic framed photographs depicting vintage race cars and motorcycles.  By now means, however, is Vintage 423 just another sports bar trying to be an upscale eatery.  Nor is it a high-end bar and grill (for one thing, there’s no grill on the premises).  In some ways, it defies categorization.

The exterior facade, a departure from the abobe-hued stereotype which dominates Duke City restaurant and residential architecture, belies a swanky interior unlike any in the city. An opulent cosmopolitan world of subdued lighting, black walls and dark woods provides a distinctly intimate ambiance coupled with a high energy, hip and happening atmosphere. From the minute you step in, you’ll get the feeling you’re no longer in Kansas. One of the first sights you’ll espy are mesmerizing rivulets of shimmering water cascading from the ceiling, a wall of wine bottles directly behind this lighted waterfall.

Vintage 423 sports an even larger wine wall which separates the dining area from the bar and lounge, boasting the largest selection in Albuquerque with some 500 bottles. It’s the type of wine wall you might expect to find at a high-end restaurant in Las Vegas, Nevada or maybe South Beach, Florida. The serpentine blonde onyx bar is also backlit, not so dark that you can’t read the wine labels but dark enough to set a relaxed mood.  An outdoor patio replete with fireplace and fire pits is available for seasonal dining.

Vintage 423’s motto is “Local, Bold and Imaginative.” The highest quality ingredients are sourced to showcase simple, pure, local, and regional flavors in a made from scratch menu unrivaled in the Duke City. Steaks include USDA Prime cuts and are aged for maximum tenderness and flavor. That menu not only showcases steaks, chops and seafood (such as steamed mussels, sauteed scallops, salmon, seafood linguine), but a number of sandwiches and burgers. Conspicuous by its absence is chile and, for that matter, other New Mexican food favorites. For the most part, the menu is “American” in all its nuanced glory.

Each prime aged steak and chop is prepared to order on an infrared broiler which seals in all the juices and flavor. The temperatures on this broiler reach 1,200 degrees Fahrenheit which means the heat intensity penetrates all exposed surfaces of the meat, creating a meaty “crust” while allowing the interior of the steak to remain moist and juicy. This broiling process, by the way, is the same one used at high-end, high-dollar steakhouses such as Ruth’s Chris. Thankfully you’ll won’t pay Ruth’s Cris prices for a very good steak.

12 July 2020:  More than eight years elapsed between our inaugural visit and our second.  That’s certainly not because we weren’t impressed.  We were definitely impressed.  What we didn’t experience during our first foray was that inexplicable feeling of homeyness, being made to feel welcome with the sense of warmth and comfort that puts us at ease and made us feel relaxed. These factors are every bit as important to us as a restaurant’s cuisine.  Service was fine and cordial, but we somehow felt out of place, like fish out of water.  We eventually figured out that dining al fresco is more our speed.

Our return visit took place on a balmy summer day with record-breaking temperatures threatening, making Vintage 423’s expansive patio a welcoming milieu for Sunday brunch.  The patio not only provides sun-shielding shade, but good spacing for tables to ensure social distancing.  There are only seven items available on the brunch menu, but you can also order lunch entrees, sandwiches, soup salad and appetizers.  Several items, among them a chilled seafood tower, are more than a bit intriguing, but when you’re in the mood for brunch, the brunch menu is where your eyes gravitate.

12 July 2020: Tempting as the appetizers may be, six salads say you’ll at least consider them as an introduction to your meal.  Each of the six is an exemplar of combining quality ingredients to optimize concordance in taste, texture and appearance.  Our choice was the baby wedge (cherry heirloom tomato, hot house cucumber, red onion, shredded carrots, crispy bacon bits, Maytag blue cheese and classic blue cheese dressing), a salad which itself has earned the distinction “vintage.”  The wedge salad dates back to 1916 when it appeared in a book titled “Salads, Sandwiches & Chafing Dish Recipes” by Marion Harris Neil.

Iceberg lettuce is a superb canvas for ingredients, all presented artistically and split for our convenience.  As an avowed aficionado of bleu and blue cheeses, I especially appreciate the generous portion of Maytag blue cheese, an outstanding blue cheese made from homogenized cow’s milk instead of the traditional sheep’s milk.  Maytag blue cheese has a intensely sharp, tangy flavor and a pungent odor with nice creaminess. It’s one of my favorites.  The plentiful crispy bacon bits are strewn about like umami shrapnel, irresistible to one and all.  Fresh, juicy heirloom cherry tomatoes provide a balance of acid and sweetness.

12 July 2020: “Brutally honest” English restaurant critic Jay Rayner tells it like it is: “A well-done steak isn’t a food choice: it’s a crime.”  That may be especially true about prime rib, an extremely tender rib primal cut.  Any more than medium-rare and prime rib loses the tenderness for which it is cherished. Kudos to the Vintage 423 kitchen staff for being on their A-game and serving a perfectly pink, nicely marbled and thoroughly tender prime rib with a flavor-packed spiced seared crust.  This melt-in-your-mouth prime rib tastes just as amazing as it looks.  The Vintage spiced roasted prime rib is served with duck fat potatoes as well as ramekins of au jus and horseradish sauce.

It’s now time for a deeply personal, tell it to Oprah level shameful confession.  In my youth, I couldn’t eat prime rib unless it was slathered in enough horseradish to defoliate a jungle.  Luckily sense and better taste buds now prevail.  My preferences are for mild horseradish sauce that ameliorates, not obfuscates the delicate deliciousness of the beef.  That’s what Vintage 423’s horseradish sauce does.  Now, if you haven’t had duck fat potatoes, you’ve got to make a run for Vintage 423 where cubed papitas are the rage.  They’re seasoned in magic dust so expect to become addicted.

12 July 2020: Damn restaurants which offer carne adovada burritos for brunch!  It pretty much ensures my adovada-adoring bride won’t order anything else.  Vintage 423’s brunch offering is called the Epic Burrito and it’s constructed with scrambled eggs, duck fat potatoes and  your choice of applewood smoked bacon, sausage, ham or carne adovada smothered in either tequila and Dos XX gravy, red chile, or green chile cheddar jack cheese.  Worse, my Kim took what could have been truly epic and stripped it to its bare essentials–carne adovada alone, no smothering of any kind.  It was boring, but delicious.

18 September 2021:  Here’s a trivia question for you.  Who’s the longest running real-life advertising character on network television?  No, it’s not Tony the Tiger.  It’s Maytag’s “ol’ lonely” repairman from an advertising campaign that’s more than 50-years-old.  That’s almost as long as Maytag blue cheese has been produced…initially by the grandsons of the founder of the Maytag appliance company.  It doesn’t matter what salad Vintage 423 offers, we always ask for Maytag blue cheese dressing and it does the job superbly.  It sure did for the Roasted Baby Beet Salad (baby arugula, dried golden raisins, feta cheese, roasted piñon, baby beets).  The beets in particular pair very well with the sharpness of the Maytag blue cheese.

18 September 2021:  It’s not only food carts and food trucks that proffer street tacos.  You can find them in fine-dining establishments such as Vintage 423 where the street tacos are offered with your choice of carne asada, shrimp or chicken.  You can also ask for one of each.  Each taco is overstuffed with pico de gallo, cabbage, pinto beans, grilled jalapeño and “guacachile,” an incendiary melding of guacamole and chile.  Grilled onions are served on the side, but there’s very little room for them on the double corn tortillas.  Once you pick up a taco you won’t want to put it down for fear all its contents will fall out.  Perhaps more than any other tacos we’ve had, these are composed for their heat value.  My Kim cried “no mas” after only one bite.

12 July 2020: Five desserts grace the Vintage 423 menu.  You can certainly never go wrong with Tres Leches Cake, the favorite of our sweet server who assured me I’d love it.  While moist and tender, it wasn’t oozing the three milks with which Mexican kitchens have been preparing this cake for generations.  Its saving grace was an espresso cream sauce topping rich with the flavor notes that make coffee my very favorite adult beverage.

Since its launch almost a decade ago, Vintage 423 has been a polarizing presence in the Albuquerque dining scene. Among Yelpers, opinions are about as divided as those in politics.  It may not be for everyone, but Vintage 423 certainly won us over with a memorable brunch in a west-facing patio one blistering Sunday.  We’ll be back.