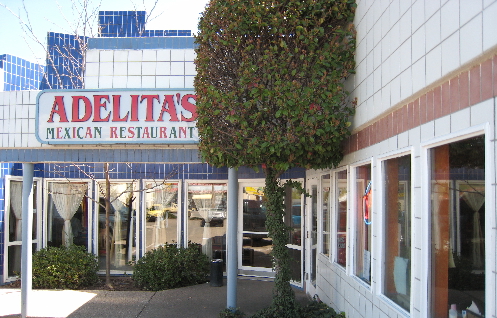 Particularly popular in Argentina and Colombia, the mixed grill called Parrillada Mixta (or just parrillada) can be any combination of grilled meats, poultry and seafood.

My inaugural experience with parrillada in San Antonio, Texas left such a huge impression on my taste buds that I behave like Pavlov’s dogs upon seeing it on a menu. More often than not, I’m left disappointed because my very first parrillada set a nonpareil standard for excellence.

While it’s not nearly as wonderful as in San Antonio, Adelita’s one of the few restaurants in New Mexico we’ve found which even offers parrillada. Served on an unheated metal grill, it is intended and enough for two people.

The parrillada mar y tierra is as disappointing as the carne asada parrillada is good. Generous portions of squid, shrimp and crab legs make for wonderful eye-candy, but when they’re served as salty as if just caught, they detract from any inherent flavors the accompanying meat has.

Parrillada is just one of many tempting items on a multi-page menu. One of the temptations I succumbed to was the caldo siete mares (seven seas soup), a seafood soup of shrimp, octopus, slams, crab legs, red snapper and mussels. With a little desalination, the soup would have been wonderful. I’m zero for two when it comes to ordering any seafood items and will probably stick to the land-based cuisine in the future.

Adelita’s serves three complementary salsas in the colors (red, white and green) of the Mexican flag. The green salsa is avocado-based and tastes like liquefied guacamole. The red salsa is made from blended chile pequin and competes with the white salsa (made from ground jalapenos) for most piquant.

The horchata, as sweet as leftover milk from a child’s cereal, is served on what might best be described as an ice cream sundae dish. It’s among the best in town as is the moist tres leches cake which positively oozes with milky goodness as you slice into it with your fork.

Adelita’s is a very colorful restaurant with orange walls and pillars around which paper mache vines wrap with yellow daisies and purple wisteria. It also fills a void in the north valley where authentic Mexican restaurants are rare.

On some Friday nights, you’ll be treated to the soothing stylings of guitarist and singer Omar Villanueva and his repertoire of romantic Mexican ballads. On Sundays, you might find Efrain Castillo, a young troubadour (pictured at left) with an amazing voice and an impressive repertoire of timeless Mexican songs.