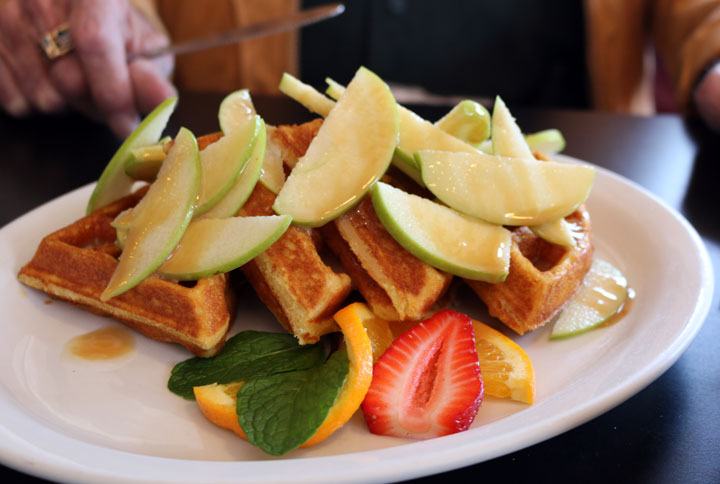 While waffles may be forever associated with late nights at The Waffle House (the ubiquitous Southern chain which has served nearly one billion waffles since its inception), waffles have made significant inroads as a bona fide culinary trend, albeit somewhat under-the-radar. That’s waffles singular…by themselves, not with chicken. The chicken and waffles combination is even more yesterday than kale and poutine. Gourmet waffles topped or stuffed with sundry, inventive ingredient combinations have inspired a sort of wafflemania across the fruited plain. No longer are fluffy and crispy waffles boringly predictable (smothered with butter and dripping with syrup) or strictly for breakfast.

It’s often been noted that in New Mexico, trends–whether they be in fashion or in the culinary arena–move at the speed of mañana, a term which contrary to the Velasquez dictionary does not translate to “tomorrow” in the Land of Enchantment. It translates instead to “not today’ which means if something can be put off until tomorrow or later, it usually will be. George Adelo, Jr., an enterprising Pecos resident even coined (and copyrighted) a phrase to describe the New Mexican way: “Carpe Mañana”–Seize Tomorrow. When it comes to the burgeoning popularity and inventiveness of waffles, however, the Duke City was actually at the forefront of the honeycomb-shaped culinary trend.

In the Duke City, the diverse exploration of waffles began in 2012 (about three years before waffles were first declared a national culinary trend) with the launch of Tia Betty Blue’s, an excellent New Mexican food eatery which introduced sweet-and-savory blue corn waffle boats. They were an immediate hit with Tia Betty Blue’s guests. Two years later, owner (and burgeoning restaurant impresario) Daniel Boardman proved himself to be a culinary visionary with the launch of Tia B’s La Waffleria, an offshoot dedicated to the humble waffle. Whether referred to as “Tia B’s” or “La Waffleria,” this unique restaurant has earned significant critical and public (4.0 rating on Yelp) acclaim.

Situated in a converted home on Campus Blvd. just west of Carlisle, Tia B’s preceded the third of Boardman’s terrific triumvirate of innovative restaurants by two years (when sibling El Cotorro, an excellent taqueria launched a few doors east). Tia B’s is a cozy, intimate milieu which often serves to overflow crowds. Weather permitted, shaded outdoor seating is available, but during inclement weather, it’s all two- and four-top seating in personal space proximity with seating by the fireplace coveted by most. On display in several nooks throughout the restaurant are waffle irons of yesterday. You may be surprised at how little they’ve changed.

Tia B’s will never be accused of being singularly focused or boring. When you’ve got such a terrific canvases as wheat, buttermilk, blue corn/buttermilk, buckwheat/sour cream, rye/sour cream, multi-grain/milk and rice/coconut waffles prepared to order, possibilities are endless. As explained on its Web site “Tia B’s offers an extraordinary array of fresh-baked, high-quality waffles, both sweet and savory, finished with an amazing assortment of house-made sauces, syrups, fresh fruits and coulis.” The menu includes both sweet combinations (served with a small fruit garnish) and savory combinations (served with a dressed mixed green garnish). Intrepid diners are invited to build their own waffles. Vegetarian and gluten-free options a plenty are also available.

As if waffles aren’t enough to sate those of us who smile at the memory of greeting the sun at The Waffle House, Tia B’s offers separate all-day breakfast and lunch menus. Breakfast options include such waker-uppers as biscuits and gravy and Waffles Rancheros. For lunch, chicken and waffles are an option if for no other reason than to see just how a restaurant specializing in waffles does it. Lunch also includes such teasing temptresses as smoked salmon waffles. Premium coffees give you another reason to head for Tia B’s when it opens at 8AM. The Mocha Mexicana (dark chocolate, red chile powder, spices, two shots of espresso and steamed milk) is the best coffee I’ve had in the metropolitan area outside Cafe Bella. It’s got plenty of personality–a bit of capsaicin-induced fire coupled with luxurious dark chocolate and a heady coffee.

Fittingly, my inaugural visit was with my friend Bob of the Village of Los Ranchos (BOTVOLR), one of the few people with whom I ever discuss politics. That makes it all the more ironic that we never discussed the term “waffling,” which describes a politician who frequently changes positions for the sake of political expediency. The term waffling, by the way, has nothing to do with the delicious griddled treats we were to enjoy, but comes from the Scottish term “waff” which means “to yelp like a puppy.” (My apologies to any puppies who may be offended in being compared to politicians.) In any regard, I invited Bob to describe his meal in his own inimitable style.

3 March 2017: From Bob of the Village of Los Ranchos: Met up with El Jefe mid AM in this semi-funky place which, combined with a great NM, clear blue sky and waning chill, reminded me of being seaside up in verdant Palos Verde, CA…a moment of delightfully “time traveling”! Salted Caramel and Apples: A buttermilk waffle topped with tangy sliced green apples, drizzled with decadent caramel cow milk (in lieu of the goat option) and sprinkled with sea salt. Aha, that’s something Californian in itself! The green apples were finely sliced wedges. While having tang, I could’ve gone a level or two higher, albeit maybe it was the not overly sweet (just right) caramel that mellowed them. While often eschewing salt of any kind, it too could have been amped up a tad, as some of us might so embarrassingly indulge in with apples/tomatoes….LOL. Waffles…nice; not too dense and not mushed out by the sauce. A nice setting to munch and blab as Yuppies might do…albeit of the older genre….while distracted by Lobo Lucies.

3 March 2017: My own breakfast choice was decided to some extent by the fact that we visited Tia B’s on a Lenten Friday and my Catholic guilt wouldn’t let me indulge in any of the carnivorous options, but also by the lure of sweet goat cheese and port-infused cherries atop a buttermilk waffle. Whether sweetened or in its natural state, goat cheese has a delightfully sour tang that couples well with cherries which are also naturally tart. When infused with port, the cherries absorb the sweetness of the port while retaining just a hint of their tartness. It’s a nice combination. Though we were offered warmed syrup, adding it would have risked an overly-sweet dish. The waffle itself, sliced diagonally into four wedges, was just slightly crisp on the outside and soft and chewy inside. It bore no resemblance nor did it inspire memories of The Waffle House.

7 April 2018: You’ll never have to ask me to “Let go of my Eggos.” The notion of reheated waffles sends shivers down my spine–and not solely because Eggos were previously frozen. There’s just so much more than can be done with waffles than dousing them liberally with syrup. Tia B’s proves this everyday with their standard waffle menu, but they amp up creativity with daily specials such as the Jalapeño Cornbread waffle (blue corn waffle with jalapeños cooked inside, black beans, red chile, Cheddar cheese, red onion and cherry tomatoes). The waffle should also have included chorizo, but because the kitchen had run out, I asked for bacon instead. Good choice as is anything to which bacon is added. This is a mammoth entry, the type of which will put you in a food coma for the rest of the day. Texturally, the blue corn waffle is a delight. It’s light and fluffy where it needs to be and just slightly crispy at its exterior. It’s a magnificent canvas for some of the most piquant and tasty red chile in town. Not every restaurant has the gumption to pair jalapeños with red chile, but it’s a pairing fire-eaters will enjoy. Counterbalancing the piquancy are two very complementary surprises: a rich, buttery guacamole and halved cherry tomatoes.

During future visits to Tia B’s La Waffleria, a make-your-own waffle adventure is in order, but first there are so many sweet and savory combinations to be tried. It will be easy to waffle (be indecisive and change my mind frequently) in deciding which waffle to try next. The options are all so inviting.