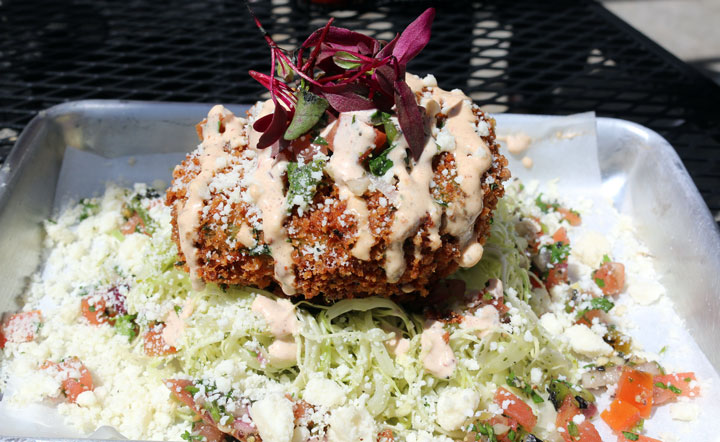 In my review of the Corrales Bistro Brewery, you were introduced to “Le Cochon,” a self-professed God’s gift to women, lady killer, playboy, seducer, Lothario and otherwise philanderer nonpareil. To my knowledge, Le Cochon is still plying his cheesy pick-up lines on women and getting his face slapped a plenty in the Boston area. He would undoubtedly giggle like the school girls of his dreams at the Albuquerque taproom named “Tap That” which dispenses libations by the ounce. In its original context, the term “tap that” simply meant putting a spigot on a keg of beer or ale so that its contents can be drawn out. As with so many seemingly innocuous terms, chauvinists like Le Cochon have made “tap that” subject to double entendre (open to two interpretations, one of which is risqué or indecent). Cerevisaphiles understanding the intended connotation of the term probably won’t giggle, but they’ll get just as excited at the prospect of tapping into a keg or six.

Shortly after finding a vacant table in the dog-friendly patio at the back of Tap That, an eager server began very enthusiastically to explain the taproom’s unique-to-Albuquerque concept. There was so much elan in his delivery that we couldn’t bring ourselves to interrupt and let him know that we don’t imbibe adult beverages when driving. When we mentioned we had heard great things about the food menu, his enthusiasm renewed. “The food here is great,” he assured us, recommending several items. One item of which we couldn’t partake was the smoked pork ribs slated to be the evening special. A light breeze ensured, however, we’d be enveloped in a mouth-watering smoky haze.

Solely in the interest of public service, let me explain Tap That’s concept. Essentially, Tap That sells beer, cider, nitro tea or nitro coffee by the ounce up to a three beer limit. Your consumption is monitored electronically (yes, there’s an app for that). To open a tab, you present your ID and credit card and are issued a bracelet that has a limit on how many ounces you can be served. A wall of some 36 offerings on tap, including local craft beers and specialty beers, awaits you. Simply find the tap you want and tap your bracelet on a tablet tied to the tap (not since Edgar Allan Poe’s The Raven have there been as many taps in one sentence). When it lights up green, give your glass to the bartender and let him or her know how much you want them to pour. You’ll be charged based on the number of ounces.

Tap That is located in the same strip mall which houses South Bourbon Kitchen, Curry Leaf and soon Sweet Tooth, which will ostensibly sate our cravings for the sweeter things in life. If you haven’t been to the area in a while, you’ll be impressed at how the entire retail center has metamorphosed. It’s become a dining destination or more aptly, a restaurant row in which diverse eateries hold court. Tap That’s menu is a melange of Asian fusion items, burgers, sandwiches and American fare. The menu isn’t a multi-page affair, but it does offer a number of interesting and creative options. There are three section on the menu: Starter, Lighter Side and Burgers, Sandwiches & More.

A predilection for potatoes was the first thing we noticed about the menu. Perhaps Tap That realizes that salty, starchy potatoes will inspire thirst and thus the consumption of more ounces. Seriously, there are so many potato items on the menu, we thought we were in Idaho. First on the Starter menu is a “tray o’ fries,” one pound of freshly cut potatoes fried and served with your choice of toppings (four options). Even one of the salads demonstrates the potential of the potato as a “lighter side” option. Fries or house chips (outstanding!) come with every burger and sandwich option.

French fry fanatics craving something just a little different would be wise to order the Tray O’ Fries with Bulgogi, a France (or Belgium to be historically accurate) meets Korea surprise. Bulgogi is Korea’s signature dish, one Americans refer to as Korean barbecue. What could possibly go better with barbecue of any kind than a mountain of fries? Seriously, a pound of fries is intimidating. As if a pound of fries isn’t daunting enough, they’re topped with strips of local rib eye which have been marinated in a sweet sauce for 24 hours then sautéed and topped with chopped cilantro and toasted sesame seeds. The only thing missing is a sizzling hibachi which would have caramelized some of the beef strips. You’ll be ferrying home a doggy bag.

You’ve got to appreciate a chef who realizes the potential of the avocado, who recognizes that you can do so much more with it than make guacamole. We’ve long believed Santa Fe’s El Farol had shown the most creativity in exploiting the avocado’s potential. Tap That tops that! Picture a fried avocado half placed on a bed of chimichurri slaw topped with fresh pico de gallo, Cojita cheese, bulls blood microgreens and a drizzle of spicy chipotle ranch. There’s a lot going on in this starter with explosions of flavor from the pairing of ingredients we hadn’t thought would go together. The unctuous, buttery avocado has a built-in cooling effect that tempers the heat of the pico de gallo and spicy chipotle ranch. Texturally the chimichurri slaw provides a delightful contrast to the avocado’s softness. Cojita cheese, of course, improves everything it touches.

It’s a bit ironic to find a bacon and potato salad (fresh Arcadian lettuce topped with apple wood bacon, seared fingerling potatoes, sliced eggs, Stilton blue cheese and toasted walnuts tossed in a light Dijon vinaigrette) on a “lighter side” menu…and because we were inclined to believe such a salad would be too light, we asked for the optional four-ounces of steak. Arcadian lettuce is actually a mix of four lettuce varieties of different textures and colors. It makes an excellent canvas for the other ingredients and because all the lettuces are rather mild, it doesn’t steal their thunder either. That’s the job of the Stilton, a creamy, rich blue cheese with a pungent aftertaste. It’s not as sharp as Roquefort, but turophiles love it. There are only about four fingerlings strewn about on the salad. Rather than eat them with other ingredients, we plucked them off and enjoyed them by themselves.

The first two burger options on the menu are aptly named. If you have a monstrous appetite, go for the Green Monster, twelve ounces of New Mexico beef served in six-ounce patties. For lighter fare, try the Green Gouda Goo, a six ounce patty with your choice of cheese and green chile stacked on a toasted potato (what else) bun with Boston bib lettuce, tomato, red onion and pickle. My sole complaint—and because we’re in New Mexico, it’s a big one—is about the insipid green chile which had no heat. All other elements of the burger were fine, but without a modicum of heat, chile is just pretty green colored fruit. If you’re tired of fries by now (and even if you’re not), you’ve got to ask for chips instead of fries. The house-made barbecue chips are easily the best in Albuquerque (excluding Jay’s served at the AK Deli and which are actually made in Chicago)!

Tap that may be a haven for serious cerevisaphiles, but bona fide foodies will find much to like in a small, but interesting menu showcasing several inventive options…and lots of potatoes.