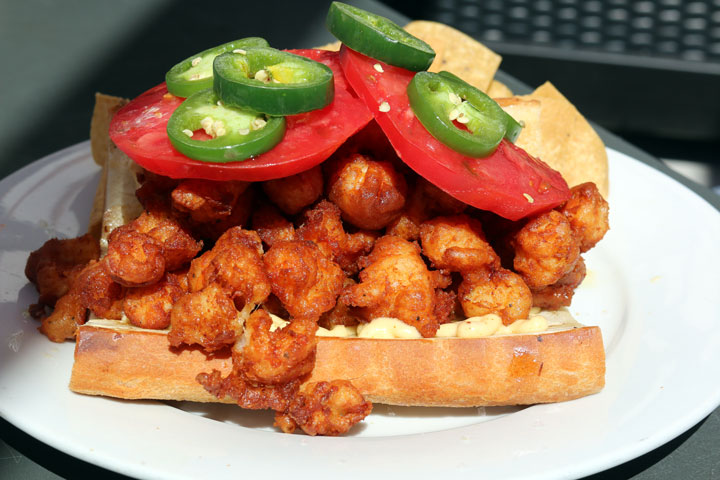 “I got a plate of chicken and taters and a lot of stuff like that
All, all I need is a biscuit, but I wish you’d look where they’re at
I guess I could reach across the table but that’s ill-mannered, Mom always said
I wish I had a biscuit, I just can’t eat without bread.”
~ Jimmy Dean: Please Pass the Biscuits

Country music is renowned for songs that tug at your heart strings. The very best sad country songs render us weepy and melancholic because our very souls can relate to and empathize with the sad, touching lyrics, mournful melodies and tear-jerking tempos. Jimmy Dean’s Please Pass the Biscuits may just be the saddest song ever in country music. This song recounts a boy desperately trying to get someone to pass him biscuits to eat with Sunday dinner. Tired of being ignored by the grown-ups, he finally decides to stop being polite and just reach for one. Alas, by that time, nary a biscuit is left.

How can a song about a little boy not getting a biscuit with his dinner be sadder than He Stopped Loving Her Today? Or Old Shep? Or Chiseled in Stone? Or How Can I Help You Say Good Bye. Sad songs all, but if you’ve ever been cruelly deprived of a biscuit prepared at a true Southern kitchen, you know the sadness of which I speak. Before the Civil War, biscuits were so revered and celebrated that they were usually reserved for Sundays alone. A century and a half later, Southerners still consider the biscuit a delicacy. So do those of us who lived in the Deep South and experienced the incomparable deliciousness of fluffy, flaky golden biscuits slathered in melting butter or strawberry jam.

Come to think of it, the dearth of great Southern restaurants in New Mexico would be a great topic for a sad country music song. When we left Mississippi, we bid adieu to stifling humidity, rampant poverty, high unemployment and politics as corrupt as…New Mexico’s. We also said good bye to great friends, lush greenery, beautiful beaches and close proximity to some of the best Southern restaurants in the country. On a ledger of deficits and surpluses, the biggest deficit might be those Southern restaurants we frequented. Lest you condemn me for undervaluing great friends, you’ve got to understand that in the South, dining is synonymous with family and friends sharing great food and warm conviviality.

Nowhere is this better conveyed than in John Egerton’s Southern Food, a magnificent tome which–despite being widely considered the definitive book on Southern cooking–was not as much a cookbook as it was a study on how food could be a unifying force among people of different backgrounds. “Within the South itself,” Egerton wrote, “no other form of cultural expression, not even music, is as distinctively characteristic of the region as the spreading of a feast of native food and drink before a gathering of kin and friends. For as long as there has been a South, and people who think of themselves as Southerners, food has been central to the region’s image, its personality, and its character.”

When we learned of the March, 2018 launch of a Southern restaurant called South Bourbon Kitchen, we had high hopes of recapturing the spirit of Egerton’s declaration that “a meal in the South can still be an esthetic wonder, a sensory delight, even a mystical experience.” Those hopes were somewhat dashed when we asked where the chef was from (expecting somewhere in Dixie) and our server responded “Deming.” Deming! That’s about as South (attitudinally, not latitudinally) as Springville, New York. If learning the chef was from Deming was somewhat deflating, perusing the menu and not seeing biscuits made me even more simpatico with the little boy in the Jimmy Dean song. Thankfully, the rest of the menu restored our hopes (more on the menu below).

While co-owner and executive chef Dru Ruebush may have been born in Deming and raised in Silver City, previous generations of his family did hail from the South. That’s a huge plus! So is the menu’s proclamation “Southern inspired. Locally sourced. Served fresh.” South’s location is both familiar (at least in terms of address) and brand new. South is located at the former home of several short-lived eateries (Heimat House and Beer Garden, Independence Grill, Los Compadres) and the legendary Liquid Assets. Unlike previous tenants who didn’t do much to the tired and aged space, the South has risen again courtesy of a complete make-over. The transformation is stunning inside and out. In fact, the entire retail center has metamorphosed. It’s now comprised exclusively of restaurants (such as the Curry Leaf and Tap That) with inviting patios where once there was only dull views of the back of the edifice. A dog-friendly patio made our debonair dachshund The Dude feel welcomed.

Though the menu lists several of our favorite Southern dishes, albeit several tinged with the decidedly New Mexican predilection for piquancy, we were torn between our yen for tradition and the excitement of disparate culinary traditions melding together. You’ll find, for example, smoked pork ribs with a chipotle Carolina sauce, habanero chicken lollipops with Taos honey, pork chop stew with Hatch green chile and a roasted beet salad with a pinon vinaigrette. It’s a menu wholly unlike that of other attempts at winning over persnickety Duke City diners to the nuances and joys of Southern cuisine.

While bologna sandwiches are ubiquitous across the fruited plain, the fried bologna sandwich is especially beloved in the South where it’s considered the “poor man’s steak.” Thin-sliced bologna won’t do. Aficionados like their bologna thick, the way it’s offered at the South Bourbon Kitchen. The very first item on the “Snacks” portion of the menu is, in fact, are two fried bologna sandwiches fittingly called Southern Sliders (two thick fried beef bologna slices, pickles and mayo nestled between a soft bread roll). Everyone who’s ever loved a fried bologna sandwich (and there are plenty of New Mexicans who have) will enjoy these very much. If I had my druthers, the bologna would have been even more deeply fried, not just at surface level and instead of a bread roll, one of those great Southern biscuits.

While Fannie Flagg’s novel Fried Green Tomatoes at the Whistle Stop Café and a subsequent movie by that name may have introduced much of the fruited plain to fried green tomatoes, at least one culinary historian contends they were actually as unusual in the South before 1991 as they were anywhere else. Robert F. Moss, wrote “they entered the American culinary scene in the Northeast and Midwest, perhaps with a link to Jewish immigrants.” Knish, kugel, fried green tomatoes. Who would have thought? If the birthplace of fried green tomatoes sounds heretical, it might shock you to learn that pimento cheese, the preternaturally delicious combination of shredded cheese, mayo and diced red pimentos, got its start in New York (or so says another source).

Entrees include Nashville Hot Chicken, the South’s answer to red chile. It was my second choice, right behind a langoustine and scallop po’boy with heirloom tomatoes and an Old Bay aioli. A netful of fried langoustine and scallops is piled into every po’boy. You’ll have to extricate about half the seafood bounty and eat it with your fork (a nice remoulade would have been welcome). Similarly, we removed the thick, meaty, juicy tomatoes and ate them sans sandwich. In our eight years living in Mississippi, we enjoyed a treasure trove of po’boys, not all of which showcased seafood this sweet and succulent.

My Kim has been on a roasted beets kick lately, but it wasn’t the beets which influenced her to order the beet salad instead of one of the myriad Southern entrees. It was the pinon vinaigrette with which that salad (roasted beets, arugula, bleu cheese, pecans) was served. While many Americans were first introduced to the pinon when basil pesto was popularized in the 1980s, New Mexicans (and by extension, my Kim) have long enjoyed the roasted flavor of piñon with its subtle hint of pine and sweetness. That inimitable flavor is prevalent in the vinaigrette though the sharp intensity of the bleu cheese threatened to overpower everything else. Kim raved about every element of the salad (especially the sweetness of the beets) save for its size. We’ve had side salads about the size of the entrée portion at South.

You know you’re in a Southern (or Southern-inspired) restaurant when things are served in a jar (usually Mason). At many Southern restaurants, it’s usually tea or soft drinks, but because Southerners consider the jar a most utilitarian vessel, jars can be used for virtually everything. Consider South Bourbon Kitchen’s Chocolate Jar (fudge brownie, salted caramel, chocolate pudding and peanut brittle). It’s not the most capacious jar we’ve seen, but it’s brimming with flavor combinations that just work well. The salt caramel is just salty enough to counterbalance the fudge brownie. Our favorite component surprisingly was the peanut brittle, as good as we’ve had anywhere north of the Mason-Dixon line.

John T. Edge, a disciple of John Egerton, believes “it’s not impossible to serve Southern food outside of the South, but it must be done respectfully.” The South Bourbon Kitchen exemplifies that respect. The South has risen again.