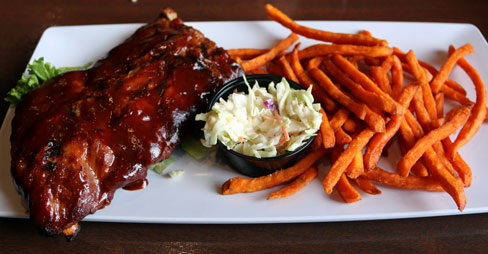 Although my Kim has now lived in New Mexico for more than twenty years, her functional Spanish hasn’t improved much (sadly this places her in the company of many native New Mexicans). She sings Spanish hymns like a songbird in church, perfectly enunciating each nuanced word, even when she has to roll her “R’s.” On rare but well-deserved occasions she can direct a slew of choice Spanish expletives at moronic motorists. She can also order all her favorite dishes at Mexican and New Mexican restaurants with fluency. What she can’t do is carry on or even understand a coherent conversation in Spanish.

During her first visit to the Land of Enchantment, my Kim inventoried her vocabulary of Spanish words and terms in anticipation of meeting my mostly Spanish-speaking grandmothers. Interestingly, her limited vocabulary included such tongue-twisting words as “albondigas” (meatballs) and the phrase “donde esta la biblioteca” (where is the library?). Neither would serve her well in discourse with my grandmothers who were as worried about their command of the confounding English language as Kim had been about her Spanish.

One early September morning, she asked if i had any suggestions for lunch. My response “vamos a la biblioteca” (let’s go to the library) drew a quizzical look. My invitation was not to visit a literary milieu, but a bar and grill with the curious appellation “Library.” A voracious reader, she was more than intrigued, prompting the only retort which made sense: “donde esta la biblioteca?.”

La Biblioteca, the Library is located on San Mateo Boulevard, in a 6,700 square-foot edifice which was previously home to the short-lived Rosati’s Pizza. The Library Bar & Grill is the second Albuquerque instantiation of a popular eatery-drinkery founded in Tempe, Arizona near Arizona State University. The other Duke City location is on Central Avenue in the Downtown district.

The Library is a combination sports bar and restaurant which should appeal to sports fans and families alike. It will certainly appeal to bearers of the XY chromosome who may have fantasized during their pubescence about the school girl attire of short plaid skirts and white blouses with plunging necklines. When not ogling the waitresses, they’ll be paying rapt attention to the many wall-mounted flat screen televisions all tuned to sporting events positioned throughout the dining rooms. On the day of our inaugural visit, Duke City sports luminary Henry Tafoya was broadcasting his popular Henry T. show from the main dining room.

Most will pay attention to the menu, a jumble of typical bar and grill favorites that includes some nine appetizers (not counting chips and sauces); three “south of the border” entrees; five half-pound, 100-percent Angus beef burgers; seven sumptuous sandwiches; six make it a wrap or salad options; six pizzas; a kid’s menu and two “favorites.” There isn’t much on the menu for vegetarians; it’s as if vegetarians don’t enjoy sports or adult beverages.

Admittedly when other appetizers don’t immediately appeal to us, we opt for our stand-by of salsa and chips though by no means do we consider this a “Miss Congeniality” of appetizers. Your best bet at the Library is the Trio, a tasty triumvirate of white queso, guacamole and fire-roasted salsa. All are surprisingly good, especially the white queso, a gooey, creamy bowl of melted cheese with fiery properties and addictive qualities. The fire-roasted salsa, impregnated with jalapeños and smashed tomatoes, has sweet, savory and piquant notes while the guacamole is rich, smooth and buttery. Best of all, the Trio is easily large enough to share. You’ll run out of the red, blue and yellow chips before you run out of any of the sauces.

Available both on the appetizers menu and the burger menu is a quadrumvirate of sliders and not just the de rigueur hamburger slider. You can mix and match your slider choices from among beef, chicken and pork on toasted Hawaiian rolls with a side of creamy horseradish. That’s it. No lettuce, pickles, onions or other condiments. They’d just get in the way and aren’t needed. That’s especially true of the pork slider, shredded pork in a sweet-smoky-sticky barbecue sauce. Frankly, the beef and chicken sliders paled in comparison with the pork slider and need the punch of the creamy horseradish to make them as good as they can be.

The aforementioned “Favorites” section of the menu lists only two items, a smothered green chile chicken plate and Grandpa Ben’s BBQ Ribs, described as “marinated in the family recipe rub, smoked low and slow ’til the meat falls off the bone.” Don’t look for the smoker anywhere near the premises. These are likely oven-baked and don’t have the telltale smokiness of real barbecue. This doesn’t mean the ribs aren’t delicious and they certainly are “fall-off-the-bone” tender. A half rack of ribs will get you six meaty bones slathered with the same sweet-smoky-sticky sauce used on the pork slider. Grandpa Ben’s BBQ Ribs are served with your choice of fries (sweet potato or regular) and coleslaw.

If you’re ever asked “donde esta la biblioteca,” your response should be 5001 San Mateo, N.E., a Library in which hushed tones and conformance to propriety is certainly not expected. This Library bespeaks of fun and food, a winning combination for families and sports fans alike.