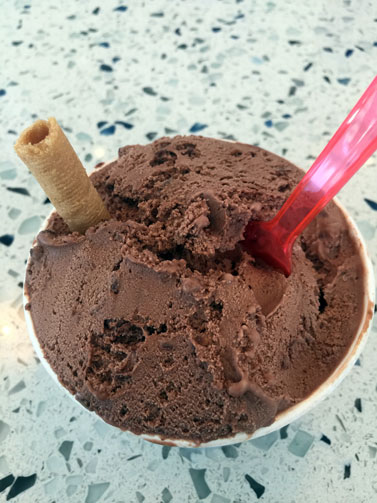 “I believe gelato is meant to be treated as medicine and taken daily as a prescription.”
~Author: Betsy Brandt

If you’ve never associated such words as searing, stifling, sweltering, sultry, sticky and sizzling with Italy, you probably haven’t been there during a summer heat wave. During the day, cobbled streets heat up like a pizza oven, radiating heat even through the night. Worse, in much of Italy air conditioning is a rare luxury, especially by American standards. Even at five-star luxury accommodations you probably won’t be able to drop the temperature down to the cool 70-degrees you enjoy at home.

Summer’s heat in Italy is probably why Andrew Zimmern, host of the Travel Channel’s Bizarre Foods Delicious Destinations program described gelato as “Italy’s air conditioning,” a phrase coined by Faith Willinger in 1996. More specifically, she called gelato “oral air-conditioning, the only food that Italians will eat on the street.” Aside from its cooling properties, both Zimmern and Willinger wax poetic about the sheer deliciousness of the cool, creamy, refreshing treat Italians have perfected.

Tucson natives and lifelong friends Stephen Ochoa and Jeff Kaiserman found out just how hot Italy can be when visiting Lo Stivale, the boot-shaped nation. Now, when Tucson natives complain about the heat, you can take it to the bank that it’s hot (Tucson, after all, experiences more than 300 sunny days per year with triple-digit temperatures very common in the summer). They found relief at a gelateria in Rome, the first of several they visited while traveling through different towns across Italy. To say they were hooked is an understatement and it wasn’t solely the cooling sensation that enthralled them. They had never before experienced such addictive deliciousness.

Returning home, they figured out the only way to recapture the flavors, textures and cooling effects of the gelato with which they had become besotted was to make it themselves. After completing a rigorous training program at Gelato University in North Carolina, they made their first batch of gelato, the taste of which transported them back to Italy. Months of planning and importing equipment (including batch freezers and pasteurizers) and products from Italy ensued before they launched Frost Gelato in 2005.

By 2009, Tucson’s hottest taste sensation had gone national, offering franchising opportunities to eager entrepreneurs. Albuquerque’s first Frost Gelato Shoppe launched in November, 2013 at the ABQ Uptown development. Located in a 1,200 square-foot store west of Marcello’s Chophouse, the store follows corporate look and feel and recipe templates designed to maintain brand integrity and consistency. Ostensibly, you can visit a Frost Gelato Shoppe at any franchised location and experience the same lively ambiance and authentic gelato flavors you’d find at the original.

Albuquerque in the summer is probably more comparable to Tucson than it is to Italy, making Frost Gelato an excellent fit. Since its wintry launch, the tiny store offering huge flavors has been one of the most delicious reasons to visit the ABQ Uptown. As at the original, all gelato ingredients save for milk and sugar are imported from Italy. Offering more than fifty gelato flavors as well as twenty-some flavors of sorbet, Frost also sells made-to-order gelato cakes, cold beverages and hot chocolate.

Frankly, had it not been for Daniela Bouneou, the effervescent co-owner of the transformative Italian gem Torinos @ Home, we might not have visited Frost Gelato. Daniela’s effusive evangelization, bordering on heart-felt passion, convinced us we need to visit…and soon. She grew up in Italy and knows a thing or two about gelato, so her gelato cred is strong. We quickly came to the realization that our inaugural visit was long overdue and that we may just have to move to the Uptown area so we can be closer to this fabulous frosty enterprise.

Frost Gelato is all it Daniela said it was and more. Not surprisingly her favorite flavor (Gianduja: chocolate with hazelnut) became my early favorite. It’s so good I immediately regretted ordering a large gelato trio, especially when the quantity of the other flavors (marble black cherry and tiramisu) far exceeded the amount of Gianduja. I felt simultaneously cheated and thrilled to have been introduced to a wonderful new flavor sensation. The ground hazelnuts impart a delightful textural contrast and nutty-savory flavor to rich Italian milk chocolate. It’s a revelation and a sheer pleasure!

My Kim and I shared six flavors (hers were Seasalt Caramel, Alpencaramel, Oreo). While we enjoyed them all thoroughly, for me our inaugural visit will most be remembered for the introduction to a magnificent new flavor. Future visits will likely introduce us to even more new taste sensations. We look forward to that!