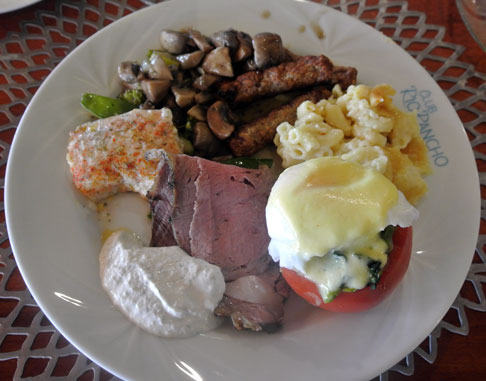 In its halcyon days, the Chamisa Hills golf course and country club in Rio Rancho was considered one of the city’s crown jewels. Its undulating 18-hole championship course with strategically placed deciduous trees and challenging water hazards once hosted the Charley Pride Golf Fiesta, one of the most prestigious tournaments in the state. Built in 1970, the 212-acre development was flanked by upscale gated communities and boasted of magnificent panoramic views showcasing the reddish hues of the Sandias at sunset and the twinkling city lights of Albuquerque at night.

Alas, over time escalating water rates made operating the course economically onerous. Soon denuded fairways and eroded bunkers replaced the once verdant grounds. In 2013, the Chamisa Hills golf course and country club was auctioned off to be purchased nearly a year later by visionary entrepreneurs Bob Gallagher and Jhett Browne who immediately began putting into action their plans for restoring the operation to prominence and profitability. The two negotiated significant water rate reduction rates and plan for reduced turf areas to conserve water. At fruition, they hope to revivify the facility into one of the area’s best event centers, not just golf clubs.

Rebranded as Club Rio Rancho, the sprawling complex includes two nine-hole golf courses, six resurfaced and lighted tennis courts, a remodeled swimming pool, a members-only restaurant and lounge with an outdoor cigar bar, a three-level bar and grill with televisions and outdoor patio seating and a remodeled indoor restaurant with a patio facing the Sandias. While some of the facilities and amenities remain available only to club members, the priceless “billion-dollar views” are available to the general public as is what promises to be an exciting fine-dining venture.

From its sprawling patio, the eponymous Jhett’s Restaurant may just have the very best views of any restaurant in the metropolitan area with the possible exception of Sandiago’s Mexican Grill. There’s a view for all seasons and times of day from the east-facing large picture windows, too. Jhett’s offers live music and dancing every Friday and Saturday starting at 8PM and a bountiful Sunday brunch, the type of which have seemingly become an anachronism.

The dinner menu bespeaks fine-dining belied by a price-point that’s surprisingly competitive with fine-dining establishments in far less ostentatious digs. Whether your choice emanates from the land (such as the Bleu Cheese Crusted Angus Filet, Ribeye Steak or Lamb T-Bone) or sea (Stuffed Filet of Sole, Honey Ginger Shrimp or Lobster tail), you’ll find it on the menu. Soups and salads as well as “nothing but noodles” entrees (such as Baked Lasagna Bolonaise and Spinach Ravioli) are also available.

The all-you-can-eat Sunday brunch is quickly becoming a Rio Rancho Sunday tradition. Available from 11AM through 2PM, the buffet-style brunch is the antithesis of the grab, gobble and go fare one associates with the terms “all-you-can-eat” and “buffet.” A fusillade of well-laid out tables with silver heating trays offer dish after dish of beautifully edible creations arranged aesthetically. An omelet station with eight different fillings is at the ready as is a carving station where a deft server cleaves generous slices from a large roast beef prepared at medium rare. Desserts aplenty and a beverage table round out the cavalcade of deliciousness.

4 January 2015: Rightfully so, the hand-carved roast beef is the primary draw. The roast beef has a deep brown, crisp, crackly, unctuous crust around the edges. The medium-rare interior is moist and tender, signs of optimum temperature control and cooking time. You can have your roast beef with au jus or with a creamy horseradish that’ll water your eyes. There are a number of other proteins on the buffet trays: bacon, sausage, fish and more. The macaroni and cheese is some of the best we’ve had in a while while the Eggs Benedict dish is delightfully creative. Instead of an English muffin, the poached egg and Hollandaise sauce rest inside a hollowed-out tomato.

13 September 2015: On Sundays in which the roast beef isn’t featured fare, you’ll find a large hand-carved ham served with a cranberry-pineapple glaze. The ham is hardly a consolation prize. It’s pulchritudinously pink with a salty-smoky deliciousness that complements the glaze so well. Few things go as well with ham as au gratin potatoes and Jhett’s version is seconds-worthy. We honestly couldn’t remember the last time we had a second portion of au gratin potatoes. That’s how good these are.

The dessert table doesn’t have tremendous variety, but what it lacks in quantity, it made up for in deliciousness. Alternatively you can sate your sweet tooth with the various fruits. The cantaloupe, honeydew melon and pineapple have an in-season freshness and flavor. Throughout our meal we were well taken care of by an attentive server staff who replenished our beverages and made savvy recommendations. All this and million dollar views of the Sandias.

Jhett’s Restaurant is a welcome addition to the Rio Rancho fine-dining scene. An excellent brunch is just the prelude to future fine-dining ventures in what is once again becoming one of Rio Rancho’s crown jewels.