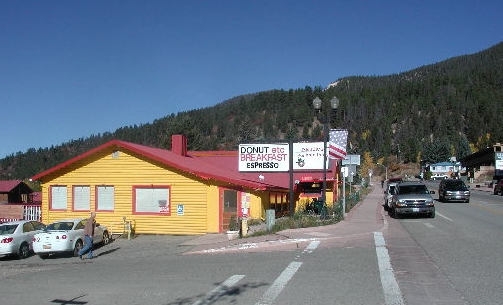 A less optimistic man than I once lamented that the healthiest part of the donut is the hole, but you’ve got to eat the entire donut to get to it. To me, that’s a “glass is half empty” perspective on one of the most popular breakfast and dessert items in the world. With almost thirty percent of American adults indicating they are trying to control their diets, donuts have also been lambasted and their consumption decreased with the increase of cholesterol conscious consumers.

Adkins himself might have given up his cholesterol denouncing diet had he found The Hole Thing Donut Shop in Red River, New Mexico, easily the best donut restaurant we’ve visited in the Land of Enchantment.

How good is this hole in the wall restaurant? During an unseasonably rainy summer in 2004, a bear broke into the restaurant and consumed an entire pan of cinnamon rolls. Who can blame him? The cinnamon rolls are wonderful warm or cold. They’re not too sweet and have only minimal icing. They’re also enormous–the size of a thick Frisbee–and are usually eaten from the outside in, in strips.

Also gigantic are the apple and peach fritters which are the best we’ve had anywhere. We’ve learned that in order to guarantee these treasures the following morning, you’ve got to “reserve” an order for the next day.

Among the donuts, the maple iced donuts and the plain glazed donuts would put Krispy Kreme to shame. Jay Leno once referred to Krispy Kreme as the “Michael Jordan of donuts.” He might not have the adjectives to describe The Hole Thing’s donuts.

The Hole Thing Donut Shop actually occupies space within a family restaurant which is open only for breakfast. The restaurant’s menu includes traditional breakfast entrees as well as New Mexico breakfast items prepared Texas style (with Texas chili). If you don’t want a full breakfast, the donuts and a steaming mug of hot chocolate will more than satisfy.