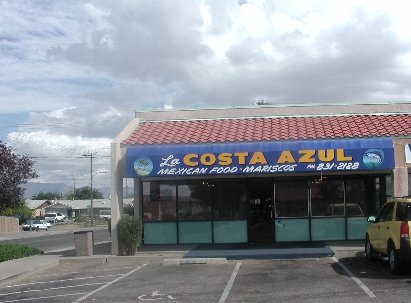 Increasingly, Mexico has also become known for high-quality seafood (mariscos) so fresh that even in land-locked locations like Albuquerque, the mariscos taste as fresh as if caught off the coast of Puerto Vallarta, not far from the famous Costa Azul resort.

La Costa Azul launched in 2005 on the former site of Mariscos Altamar, one of Albuquerque’s very best and longest running mariscos dining establishments. While similarly named, it is not affiliated with Santa Fe’s fabulous Mariscos Costa Azul though the quality of its cuisine might invite favorable comparisons.

La Costa Azul is awash in bright colors–three interior walls reflecting various tones and shades of the Pacific’s translucent waters. The back wall separating the dining room from the kitchen is a shimmering green, perhaps the color of some of Mexico’s most iridescent inland jungle foliage.

The waitress stand sits under an overhanging interior roof replete with grass and reminiscent of the beachside food and beverage stands in some of Mexico’s touristy beach resorts. A large plastic marlin lies on that roof, directly above a high-definition television tuned to what must be the Mexican version of MTV. An aquarium teeming with small, multi-hued sea life sits below the television.

Even the salsa is of an unconventional color, more orange than red. It is also quite piquant. Thin, but not quite watery, it’s probably too hot to scoop up and eat like the chunky salsas, but immerse it part way and you’ll still get a good kick.

Even better than the salsa is the restaurant’s guacamole, the color of radiating kryptonite. While lime isn’t uncommon in guacamole, the lime on La Costa Azul’s guacamole was definitely more pronounced. It melds wonderfully with the fresh avocado and the jalapeno which gave it a kick.

The tostada de ceviche mixo, is among the very best you’ll find in New Mexico, matched only by the version served at the aforementioned Mariscos Costa Azul. Raw seafood (crab, shrimp, fish) is marinated (almost pickled) with raw onion, lemon juice, cilantro and green pepper to form not only an absolutely delicious appetizer, but a colorful one as well.

You’ll be hard-pressed to select from the menu’s ocean treasures. The back page of the multi-page menu lists several non-seafood items for landlubbers. There were no landlubbers at La Costa Azul during our inaugural visit.

When you don’t know what to order, it’s sometimes advisable to select something named for the restaurant. In this case, that would be Camarones Costa Azul, shrimp from the blue coast. About a dozen shrimp are wrapped in crispy bacon then topped with melting mozzarella cheese. This is a hit-and-miss entree that is oftentimes desiccated. You might also prefer a sharper Mexican queso, but the mozzarella does its job and is a wonderful complement to the slightly briny shrimp. You’ll be pleasantly surprised to find that not only is the shrimp de-veined, the annoying tail has been removed for you. This entree is accompanied by ridged French fries, the kind out of a bag, and saffron rice with pieces of carrots and peas. The platter on which this is served is roughly the size of the Thanksgiving turkey platter which means you’ll have left-overs.

Another hit-and-miss entree La Costa Azul manages to do exceptionally well is paella. In fact there are two paella entrees on the menu. Go for the Paella Valenciana, a large platter brimming with seafood (squid, shrimp, crab, fish, clams and mussels); sausage (almost as sweet as the Filipino sausage longoniza) grilled red, green and yellow peppers and a buttery saffron rice. It is better than the much more expensive paella we’ve had at some Spanish restaurants.

La Costa Azul has only one shortcoming and that’s a sparse dessert line-up. The only dessert available during our inaugural visit was a desiccated chocolate cake. At least none of the seafood was as dry as that cake.