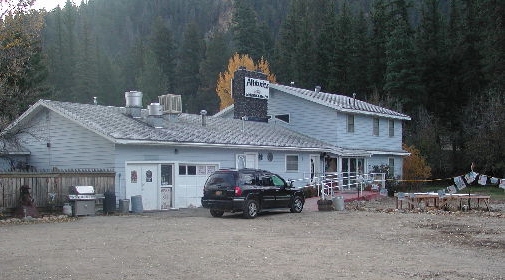 No place is so dear to my childhood,
As the little brown church in the vale.

Step out of Altitudes Restaurant & Wine Bar on a dark moonlit night and the first thing you see is a large, illuminated alabaster cross atop a wooden church steeple. Directly beneath the cross is a colorful stained glass window depicting Christ, the Good Sheppard. It’s no wonder the popular gospel standard “The Church In The Wildwoods” is on our mind after each and every wonderful meal at what has long been the site of one of Red River’s dining treasures.

Before the blue, two-story edifice housed Altitudes Restaurant & Wine Bar, it was the site for years of Brett’s Homestead, one of our favorite dining destinations in the alpine tourist community of Red River. Retained from the Brett’s days is a duck pond in which feathered fowl congregate and entertain diners simply by being themselves.

Altitudes actually retained much of the charm that drew us to Brett’s Homestead. Those charms include the dulcet musical stylings of crooner Philip John Brooks singing old standards to the accompaniment of a 12-string guitar. Muted walls and subdued lighting inspires hushed tones and couples gazing lovingly into each others’ eyes. From what we could tell, every table in each of the restaurant’s several dining rooms was occupied by couples, all of which seemed inspired by the ambience to be more appreciative of their partners.

There really is a tranquil solemnity to dining at Altitudes. That might be because diners can’t help but ponder the framed placard on a wall proclaiming for all to see that “Christ is the head of this home, an unseen guest in every room.” With that realization, diners are on their best behavior, practicing social amenities rarely seen any more.

An upscale menu features poultry, beef, seafood and pasta, but couples seem preternaturally drawn to the restaurant’s “Grand Platters for Two.” Obviously intended for couples in love, the grand platters’ subtitle reads “Romance has no bounds! A lavish presentation on a heated silver platter. All served with your choice of shrimp cocktail or sautéed mushrooms.” Obviously the chef realizes that good food is a precursor to romance.

We definitely hoped the sautéed mushrooms were a precursor to a wonderful meal because these fleshy fungi swimming in a hearty, rich broth were absolutely fabulous. The broth was a masterpiece that showcased a sublime blending of wine, butter, peppercorn, minced garlic and parmesan cheese. Hard-crusted bread is provided so you can sop up every drop of this deliciousness.

There are three grand platters for two on the menu: Spring Roasted Rack of (New Zealand) Lamb, Chateau Briand served with a sweet red Vermouth sauce and laced with shitake mushrooms and a Seafood Platter that includes two lobster tails, three king crab legs and a skewer of eight jumbo shrimp all piled high on an oak plank. Even though Red River, New Mexico is no Nantucket when it comes to just-caught fresh seafood, we opted for the seafood platter and weren’t disappointed.

A perfunctory soup or salad choice heightened our anticipation. Like the sautéed mushrooms, the soup and salad turned out to be fabulous. The soup was a small cup of French onion soup with a small slice of French bread, caramelized onions and a rich white cheese swimming in a hearty beef broth. The salad featured spinach and other greens drizzled with an inspired house raspberry vinaigrette.

Accompanying starches were rosemary rice pilaf for Kim and green chile mashed potatoes for me. While they were both quite good, our focus was on the seafood bounty covering our table.

The Alaskan King Crab was more fresh than it had a right to be considering our land-locked location. Each crab claw resembled Popeye’s right arm after a spinach fix. Our prize for cracking each claw was a treasure trove of sweet crab meat to be dipped into steaming butter.

The Lobster Tail was probably a good eight ounces of sweet and savory lobster flesh, the kind that melts in your mouth after a dip in a hot butter bath. In all honesty, the lobster was just slightly rubbery, but we’re 2300 miles from the water in which it was caught, for gosh sakes.

The eight giant shrimp on a skewer had a prominent smoky taste that brought out the garlic and peppercorn seasoning in which they were prepared. Like the lobster, they were only slightly more chewy than they should have been, but probably not even enough for me to whine about it.

Altitudes is a restaurant at which you’re inspired to say grace before your meal then give thanks after having finished it. After all, the church in the wildwoods is only a few steps away.