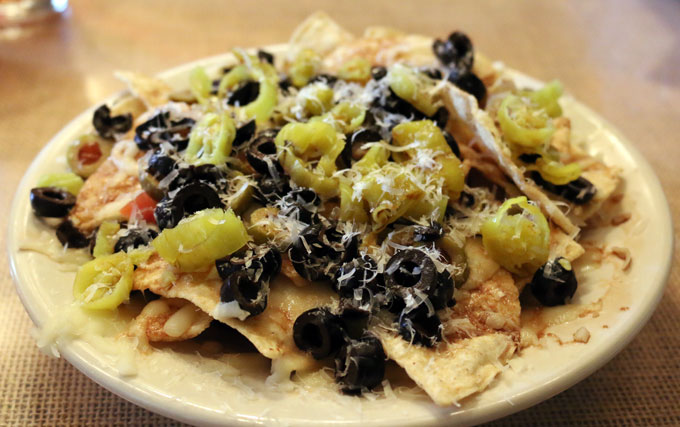 The depiction of a dove in flight with an olive branch in its beak is common in early Christian art and tradition. The dove symbolizes the Holy Spirit while the olive branch is seen as a symbol of peace. Christian tradition, as chronicled in Genesis 8:11, describes a dove carrying an olive branch to signal the cessation of flooding throughout the world after forty days and forty nights of rain: “And the dove came in to him in the evening; and, lo, in her mouth was an olive leaf pluckt off: so Noah knew that the waters were abated from off the earth.”

Greek mythology mentions the olive branch numerous times, including during a tale of a competition between Athena, the goddess of the wisdom and Poseidon, the god of the sea. With both immortals vying to become the patron deity of Athens, the victor and recipient of the city itself would be determined by which of the immortals bestowed the city with the best gift. Poseidon stuck his massive trident into the ground to create a well of briny sea water, a fairly useless gift. The wise Athena then planted a simple yet infinitely more useful olive tree beside the well. Athena’s gift was judged to be superior, earning her the title of patron deity of the city.

A large mural on a dining room wall at the Olive Branch Bistro in Albuquerque’s Northeast Heights depicts both deities as well as the Parthenon, the temple on the Athenian Acropolis. It’s not every restaurant in which two imposing Olympian gods watch over you as you partake of traditional and contemporary Mediterranean cuisine. Then again, not every restaurant has the history and heritage of the Olive Branch. if you’re scouring your memory banks for recollections of the Olive Branch, you need go no further than March, 2016 when the restaurant opened its doors at the site which, for the previous 34 years, housed the beloved Duke City institution, the India Kitchen.

Before there was an Olive Branch Bistro, however, there were a couple of food trucks prowling the mean streets of Albuquerque plying their mobile kitchen wares for the teeming masses. One of those food trucks, the Greek Geek specialized in seven-inch pita pizzas and gyros. The other, Hot off the Press, earned a following on the deliciousness of their Cubano and grilled mac and cheese sandwich. Ryan Seabrook (Greek Geek) and the duo of Michelle Haskins and Karen Seabrook (Ryan’s mother) joined forces to launch the Olive Branch. Instead of kitchens on wheels with no permanent seating for their guests, the triumvirate now offers 58 seats for guests and a kitchen in which the walk-in refrigerator eclipses their previous working spaces

Though sporting a Montgomery address, the Olive Branch Bistro is set back quite a ways from the heavily trafficked street (which sometimes doubles as a racecourse). Its signage doesn’t beckon you either. In fact, unless you’re looking for it (or at least looking for the India Kitchen), you might not find it. Fortunately Heidi Pinkerton, the second most prolific contributor (behind my friend Larry McGoldrick) to Zomato waxed poetic about her inaugural experience: “Lamb, lamb, lamby lamb…oh my goodness, the best lamb that I have had in Albuquerque!” Heidi had me at “lamb.”

Lamb, the other red meat, isn’t as prominent on the menu as you might expect for a restaurant specializing in Mediterranean food. There’s plenty of beef and chicken, too, as well as several items in which meat doesn’t play a part at all. The menu is a sort of “best of” compilation of items once offered at the Greek Geek and Hot Off The Press. That means there’s something for everyone. The “House Favorites” section of the menu, for example, showcases favorites from the Hot Off The Press days such as twice burnt tacos and the original Cubano. The Grilled Sandwich section pays tribute to other Hot Off The Press creations such as the Grilled Mac and Cheese.

The “Mediterranean” section of the menu lists a number of Greek Geek favorites such as lamb and chicken gyros. The menu also offers a number of burgers, salads and the incomparable seven-inch pita pizzas made famous by the Greek Geek. The menu purports to offer an “irresistible blend of Mediterranean and American cuisine” with “recipes inspired by authentic Mediterranean dishes brought back from Greece, Turkey and Italy, with a touch of Albuquerque.” If that doesn’t have you reaching for your car keys, you should see the housemade desserts, all made from scratch “with love.”

As you peruse the menu and wrestle with the many choices available, a basket of bread with olive oil is brought to your table. It wasn’t the “peasant bread and a floral-olive oil” Heidi Pinkerton described in Zomato, but that’s probably an anomaly. It may, in fact, have been fortuitous for us that the bread was somewhat stale because we didn’t polish it off quickly and ask for more. On the other hand, the bread and olive oil were the restaurant’s opportunity to make a good first impression and it didn’t do so. Luckily everything else made up for it, but we were dubious.

Italian Nachos (tortilla chips, Mozzarella and Parmesan cheeses, green and black olives, pepperoncini and balsamic vinegar) would make a good impression on any discerning diner. Unlike the Mexican and New Mexican nachos to which we’re all accustomed, Italian Nachos are an adventure into the unexpected, offering a flavor profile of contrasting and complementary ingredients that go very well together. The salty richness of the cheese pair is a nice counterbalance to the pickled, lip-pursing tanginess of the pepperoncini. You might be surprised at just how different green and black olives taste. Then there’s the Balsamic vinegar which has both acidic and sweet notes. You’ll scoop up these nachos with alacrity.

Gyros, the traditional Greek fast food wrap stuffed with meat, vegetables, and Tzatziki, are served open-face style at the Olive Branch. A large, flat pita served warm is topped with the restaurant’s signature lamb or chicken, black olives, tomatoes, feta and your choice of traditional or spicy Tzatziki sauce. For a blend of flavors, ask the accommodating staff for both lamb and chicken. Both are good. If you like sharp, tangy feta, you’ll appreciate the large chunks which adorn the gyro. For me, there can never be enough Tzatziki, that sauce made from Greek-style yogurt, diced cucumbers, dill weed and a small amount of vinegar. Make sure you ask for a second portion, and make it the spicy version which packs a punch.

“Release the Kraken!” If everything you ever learned about Greek mythology comes from the campy 80s movie Clash of the Titans, you probably believe the Kraken is a mythological sea monster released by Zeus to destroy Argos for its insolence. In actuality, the Kraken is nowhere to be found in Greek myths. Its origins are Nordic. In any case, you’ll be happy that the Olive Branch has released The Kraken (the restaurant’s signature lamb piled on a ground beef patty topped with feta, spicy or traditional Tzatziki sauce and pepperoncini) on its burgers menu. The combination of a ground beef patty and lamb brings out the best in both, but my favorite elements on this behemoth creation–where its personality comes from–is the spicy Tzatziki and lip-pursing pepperoncini. The Kraken is served with fries (out-of-a-bag and nothing special).

The dessert menu is scrawled on a strategically placed slate board you’ll ponder throughout your meal. It features such intriguing items as a ricotta cheesecake, baklava and pecan pie, again all housemade and made from scratch “with love.” You can certainly taste the love in the Loukoumades, a type of Greek doughnuts (or more closely resembling donut holes). Where traditional Loukoumades are generally served with honey syrup and cinnamon, the Olive Grove takes creative liberties. The Olive Branch injects chocolate and caramel into the center of a Loukoumades and tops them with even more chocolate and caramel. What could be better. Well, maybe one with key lime in the middle or one with cherry and peach. Served piping hot, they’re a delightful treat.

Another Olive Branch specialty is the restaurant’s chocolate cheesecake. Delightfully dense cheesecake on a Graham cracker crust–what’s not to like? Chef Ryan Seabrook admits to not liking chocolate, but to enjoying this cheesecake which he told us “tastes like ice cream.” It does indeed, albeit room temperature chocolate ice cream that doesn’t melt. Sweet and delicious as these desserts may be, they pair well with the restaurant’s pomegranate-lemonade, a thirst-slaking beverage that’s sweeter and not as tangy as regular lemonade.

Chef Seabrook checked up on us several times during our visit. He’s an engaging fellow with an aim-to-please customer orientation that’s reflected on the restaurant’s wait staff. Because everything is made to order, a meal at the Olive Branch is nicely paced, not rushed. There’s something to see on every one of the restaurant’s walls, including tea towels with recipes for Greek standards. Then, of course, there’s the mural of the Olympic gods watching over you as if to make sure you finish everything on your plate.

It’s not every food truck that translates well to a brick-and-mortar operation. The Olive Branch Bistro has the pedigree and following to be successful, perhaps even to experience the longitude of its predecessor, The India Kitchen.