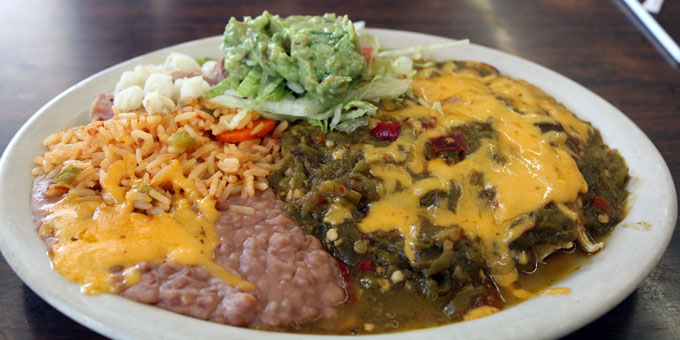 From a social connectedness perspective, 1995 was the dark ages. The internet as we know and love it today was in its relative infancy. There was no Urbanspoon, no Yelp, no Gil’s Thrilling (And Filling) Blog…no trusted online resource to enlighten and entice diners. My only knowledge of Santa Fe’s restaurant scene came from fading memories and a 1994 article on Fortune magazine naming the City Different as one of the fruited plain’s ten best dining destinations. The article listed such stalwarts as the Coyote Cafe, Santacafe and the Tecolote Cafe as among the city’s best.

After nearly two decades of wanderlust and travel courtesy of the United States Air Force, I had finally returned home to New Mexico and looked forward to introducing my bride of ten years to one of Fortune magazine’s anointed restaurants. It was our first excursion together to Santa Fe and my first opportunity to impress my Kim with sophisticated Santa Fe cuisine. My mom who’s infinitely more intelligent than I am had other ideas, steering us away from Fortune magazine’s popular tourist destinations and introducing us to one of Santa Fe’s quintessential off-the-beaten-path, mom-and-pop restaurants, a gem named El Comal.

By 1995, El Comal had already been serving New Mexican cuisine for over a decade. Tucked away in a small, nondescript strip mall that already had an anachronistic, timeworn look and feel to it, El Comal was the antithesis of Fortune magazine’s anointed restaurants, devoid of the trappings and superficiality that so often defines what unenlightened diners often consider signs of good restaurants. El Comal is named for the heavy cast iron griddle used to cook tortillas. It appeared to be a magnet for blue collar workers and Hispanic families, preparing New Mexican food as they would prepare it at home.

Just as El Comal itself is receded from the well-trafficked Cerrillos Road, over the years memories of the restaurant receded to the back of my mind. Frankly, it wasn’t until the well-traveled Lobo Lair owner Mark Chavez mentioned it on a tweet that I fondly remembered a very good meal there so many years ago. Chavez captioned a photo of his lunch “real recognize real.” Real is an apt description for El Comal, one of the least pretentious and most authentic New Mexican restaurants in the Land of Enchantment. Not much had changed in the nineteen years since my last visit, but it did secure a commitment not to let so much time pass before my next visit.

If you have a number of restaurants on your “rotation” of frequent favorites, one visit to El Comal will probably convince you to add it to that rotation. It’s that good! It’s that real! A comprehensive breakfast and lunch-dinner menu is replete with all your favorite New Mexican dishes while a chalkboard lists a handful of daily specials which the wait staff dutifully pushes. During a visit in 2014, neither the red or green chile were made with cumin. Two years later, cumin is used on the red chile and salsa, but the wait staff will swear it’s in moderation (though for someone who can discern one part cumin per million, it’s intensely present). The green chile tends to be more piquant than the red so the heat obfuscates the influence of the cumin.

Chips and salsa have become so de rigueur that we often take for granted that they’ll be good and that they’ll be the most piquant items on the menu. More than often the chips and salsa live up to those expectations. At El Comal, they exceed all expectations…even though the presence of cumin is certainly discernible. During my 2014 visit, I thought the chips and salsa were among the best served at any New Mexican restaurant in Santa Fe, but the addition of cumin has changed my opinion. The salsa, made with red chile, is incendiary, offering a piquancy that is heightened by the restaurant’s scalding hot coffee. The chips are crisp, lightly salted and perfect for dredging large scoops of the superb salsa.

25 July 2014: When your server pushes a dish such as the breakfast enchiladas with alacrity, not ordering them is not an option. Thank goodness I’m such an easy mark. These are among the very best breakfast enchiladas I’ve had: two rolled corn tortillas engorged with scrambled eggs and chorizo topped with shredded cheese and red and green chile (Christmas-style). Chorizo is the Rodney Dangerfield of the breakfast meats, usually mentioned after bacon, sausage and ham, but when it’s made well, there is no meat quite as rousing in the morning. El Comal’s chorizo is rich and flavorful with a pleasant spiciness and just a bit of char. The corn tortillas are redolent with the enticing aromas of corn just off the comal.

The highlight of the breakfast enchilada entree is most assuredly the red and green chile, both of which are quite good. The red chile has a depth of flavor very few red chiles achieve. The green chile also has a real personality, one that reminds you chile is technically a fruit. The breakfast enchiladas are served with pinto beans and hash browns. The hash browns are of the “take it or leave it” variety, but dip them in the chile and they’re addictive. In fact, the chile is so good you’ll finish off the oft-annoying garnish with it. The beans are top shelf, as good as they can be made.

25 July 2014: El Comal offers a la carte tacos filled with ground beef, shredded beef, chicken and get this, carne adovada. You haven’t lived until you’ve had a carne adovada taco. It’s a life altering experience, one that might entice you to order the carne adovada plate on your next visit. The carne adovada is porcine perfection, tender tendrils of pork marinated in a wondrous red chile (albeit tinged with cumin). It pairs wonderfully with the corn tortilla in which it’s nestled. My Kim now wishes all tacos were carne adovada tacos.

5 June 2016: When consternation crossed our faces upon hearing that both the red and green chile were made with cumin, our server insisted we wouldn’t even notice. That wasn’t the case (not even close), but the green chile has such a pleasant piquancy that it offset the McCormack’s seasoning flavor of cumin. There was plenty of green chile blanketing flat enchiladas engorged with chicken with a dollop of guacamole on the side. Yes, in an example of truth in labeling, the menu described the dish as enchiladas with guacamole and that’s what we got. Mary & Tito’s seems the only restaurant capable of actually using guacamole as a filler as well as a topper. In any case, the green chile and the pronounced corn flavor of the tortillas made these enchiladas a winner.

5 June 2016: Santa Fe is home to the best migas we’ve enjoyed in New Mexico with the very best being found at Cafe Fina (The Chocolate Maven’s version is also excellent). Despite the addition of jalapeños, El Comal’s rendition lacked any real bite…and that’s not this asbestos-tongued fire-eater talking, but my infinitely more delicate wife. A molten blanket of cheese covered scrambled eggs, tomatoes and torn ribbons of tortilla chips. Should we order migas at El Comal a second time, we’ll ask for the green chile instead of the tepid jalapeños.

El Comal may not be on any national publications touting the best in Santa Fe restaurants, but locals have a high regard for this small mom-and-pop. It’s a great restaurant warranting a greater frequency of visits.