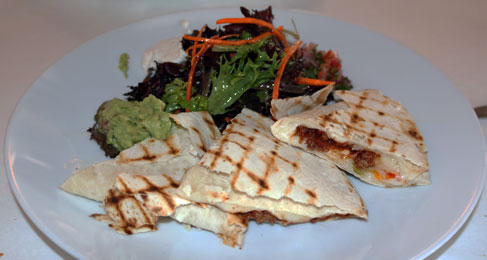 Is there anything as pure and simple as the innocence of a child, especially during the most magical time of the year? When my then six-year-old niece penned a heartfelt letter to Santa Claus, there was no doubt in her mind that her letter would be delivered and her wish would be granted. After all, she had been extra good all year long and what she wanted for Christmas was so reasonable. My niece’s fondest Christmas wish was that her family dine at Santacafe—not because of its reputation for inspired cuisine, but because she was sure she would meet jolly old Saint Nick at his restaurant “Santa Café.”

It’s entirely possible my niece may have been the only person ever to have suffered a crushing disappointment at Santacafe, an elegant edifice which has been fulfilling wishes of discerning diners ever since it launched in 1983. In its three decades plus of pleasing the refined and pedantic palates of Santa Fe’s residents and visitors, Santacafe has been consistently regarded as one of the City Different’s very best, an institution the New York Times called “a restaurant to love, offering perhaps the best combination of inspired food and attractive surroundings in the city.”

As you approach from Washington Avenue, those attractive surroundings won’t jump out at you nor will Santacafe’s rather austere signage. In fact, the restaurant’s frontage is rather homogeneous, albeit a lighter adobe hued than most. Step into the boulder-strewn courtyard with its canopies of towering shade-providing trees and you’ll be magically transported (at least for a little while) to another place, an even better Santa Fe. When the air cools, you can retreat to one of the four small dining rooms where kiva style fireplaces form the cynosure for otherwise minimalistic and immaculately white surroundings in which the color of the tablecloths matches the color of the walls. Close proximity seating has the advantage of being able to see the culinary classics being delivered to your neighbors’ tables.

Long before it was a restaurant, the adobe abode was the home of Jose Manuel Gallegos, an ordained Roman Catholic priest who eventually dedicated himself entirely to politics, even serving two stints on the United States Congress. In the novel Death Comes for the Archbishop, author Willa Cather depicted Padre Gallegos as a hedonistic glutton and gambler. These contentions were disputed and disproved by noted historian Fray Angelico Chavez who ultimately established that racist writers and historians had unjustly besmirched New Mexico and its Hispanic citizenry whom they painted as dissolute and indolent.

Over the years, Santacafe has attracted its share of the glitterati—both to the “front” and the “back of the house.” From 1997 through 1997, Ming Tsai served as executive chef, earning “best chef in Santa Fe” honors and garnering a “27” out of “30” in the 1996 Zagat Guide. Tsai’s “East meets Southwest Cuisine” concept drew the interest of the Food Network where a year after leaving Santacafe, he began hosting an Emmy award-winning show called “East Meets West.” Giada De Laurentiis, another Food Network luminary never worked Santacafe’s hallowed kitchen, but she did visit the restaurant in 1997 for her “Giada’s Weekend Getaway” show.

The influence of Ming Tsai is still very much in evidence on the menu (including the shiitake-and-cactus spring rolls with Southwestern ponzu dipping sauce), but Giada’s influence may be even more prevalent in the form of diners attempting to mimic her dining experience. Like the toothsome beauty, they ogle the covered 40-foot well by the bar which dates back to 1857. They pick up the crayons provided on each table and draw on the white paper atop the even whiter table cloths. They order what Giada ordered. That would be the swoon-inducing crispy calamari and the vegetarian chile relleno. Both are excellent choices!

The menu is replete with excellent choices. It’s a frequently changing digest of deliciousness, with items in red denoting changes through the month as fresh, seasonal produce becomes available. It’s the type of menu about which you’re likely to ask your servers a few clarifying questions (is the lobster roll made with mayo, for example). It’s the type of menu you’ll peruse at length because there are so many options that sound equally appealing.

Fortunately while you’re perusing the menu, your servers will deliver a basket of yeasty, crusty bread and crispy flatbread impregnated with red chile. Whipped butter from a small ramekin spreads easily over the bread, but you won’t want anything touching the flatbread which has a discernible bite (the type of which traumatizes tourists, but delights locals). You’re likely to polish off the basket before appetizers arrive, but servers will happily oblige (and likely expect) requests for bread replenishment.

The aforementioned crispy calamari that so besotted Giada spearheads the triumvirate of appetizer “classics” which also include the aforesaid cactus spring rolls as well as shrimp and spinach dumplings with tahini sauce. Chimayo red chile onion rings with Judy’s catsup (more on this later) are another popular choice. You might also opt for the Mexican braised beef and chorizo quesadilla with Asadero cheese, guacamole, pico de gallo and crema fresca. The tortilla, with prominent striations from a grill, can’t hold in all the ingredients or their flavor. It’s a winner and so are accompanying condiments, especially the dill-infused crema fresca.

One of the reasons I suggested earlier that you ask questions about menu items in which you’re interested is because you want to ensure what you order is precisely what is delivered to your table and not necessarily an interpretation of an item you ordered. In ordering the grilled Angus petite filet with pommes frites, we expected traditional French fried potatoes–not necessarily thickly cut but certainly not elongated, thinly-cut shoestring potatoes. Ordinarily shoestring potatoes are fine, but they are absolutely wasted on some of the best restaurant ketchup we’ve had in years. “Judy’s Catsup,” named for co-owner Judith. Ebbinghaus, is so good we picked up a bottle when we left.

As for the grilled Angus petite filet, there’s accuracy and truth in the menu. It’s most definitely petite, probably no more than five or six ounces. It’s also swimming in a pool of thyme demiglace. Thyme, with its light bouquet, probably gained more notoriety from Scarborough Fair, the Simon & Garfunkel song, than it has from any items with which it’s prepared. Because thyme has a faintly lemony flavor and light bouquet, it’s not an overpowering culinary herb. Had it been rendered from just about any other herb, the demiglace would have obfuscated the flavor of the filet entirely.

Salads, some of the most creative and delicious in town, are always a good bet at Santacafe. The Baby Arugula Salad is our favorite, a large plate splayed with a mound of baby arugula crowned with a single Spanish goat cheese croquette, pears, Chimayo red chile candied pecans and pomegranate seeds drizzled with a pomegranate vinaigrette. The distinctive peppery flavors of adult arugula are diminished somewhat on baby arugula, but you’ll likely be focusing on the harmony of the many complementary ingredients on this salad.

For some reason, the highlight of our visits to Santacafe tends to be the restaurant’s decadent and delightful desserts. A half dozen tempting treats are available for your postprandial pleasure. Make sure the one you order if you’re only having one is the award-winning chocolate mousse, an “adult” chocolate mold stuffed with a thick mousse on a plate decorated with a blood orange-caramelized pineapple glaze and Grand Marnier whipped cream topped with red chile candied pecans. It’s one of my very favorite desserts in New Mexico, a dessert worth doing several hundred extra sit-ups for (and I hate sit-ups).

For my Kim, sweltering summer days are the best excuse for her favorite dessert of all–ice cream or any of its relatives. In Santacafe’s sorbet trio, she may have found her very favorite. That terrific trio showcases the fruity deliciousness of mango, lemon and raspberry, all made on the premises and each idealizing the native flavors of the fruits from which they are made. She enjoys the sorbet trio so much, she gives me the three accompanying old-fashioned cookies so the cookies don’t interrupt her enjoyment of the sorbet.