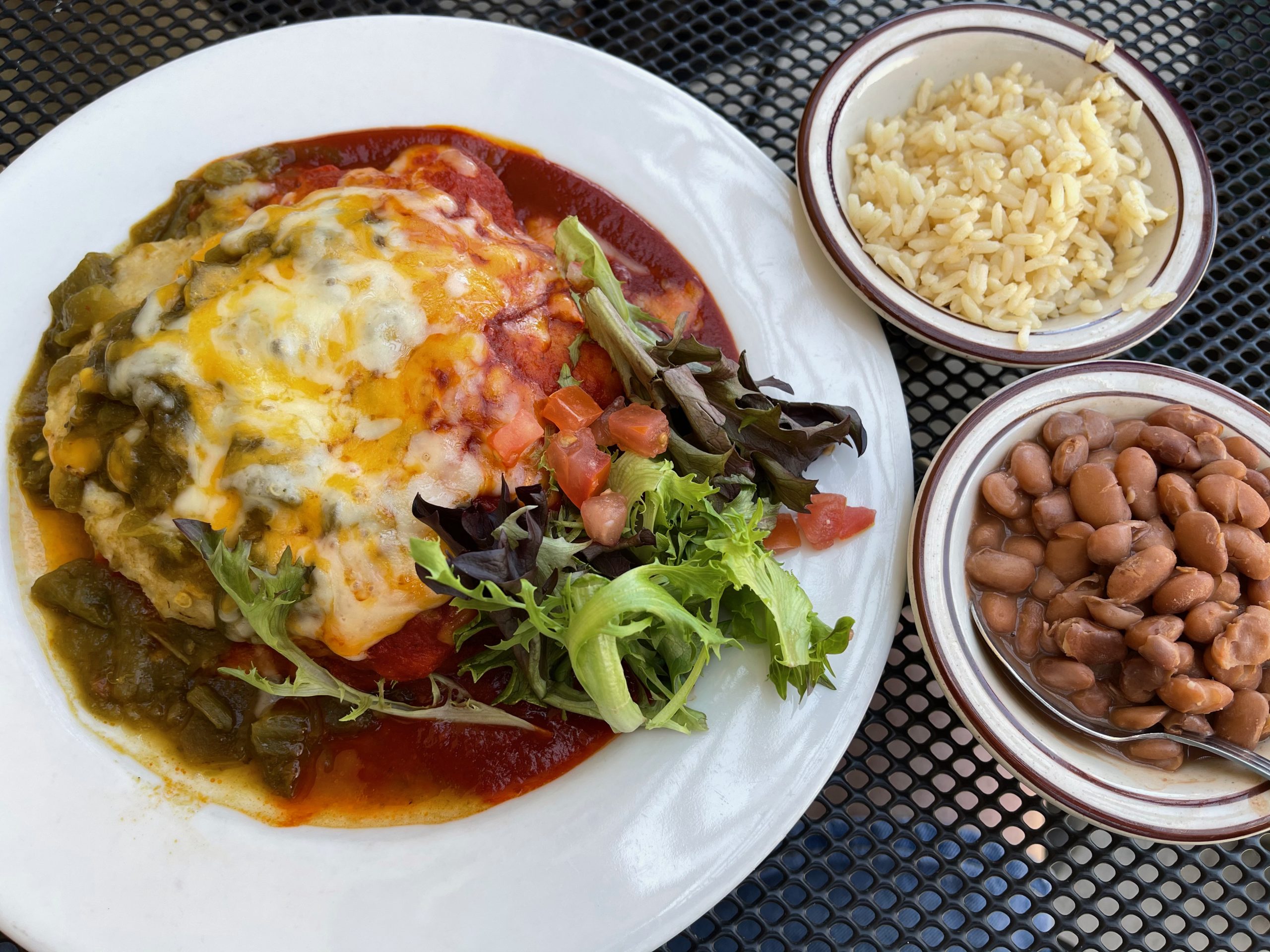 Ever the lexicologist, my first inclination at seeing the mantra “panza llena, corazon contento” emblazoned on any restaurant’s menu is to ponder the veracity of the audacious claim that filling the belly can leave diners contented. The venerable New Mexican dicho which translates from Spanish to “full belly, happy heart” was, after all, conceived at a time when food wasn’t nearly as plentiful as it is today. Enchanting as it may be, New Mexico is a land which can be harsh and unforgiving as my forefathers found out when, for centuries, they eked out a meager subsistence from an austere terrain amidst the ravages of climatic extremes.

As the popularity of buffets serving humongous helpings of pitiful pabulum will attest, any restaurant can accomplish the “full belly” feat, but it takes something special to truly make the heart happy. February, 2010 saw the launch of a New Mexican food restaurant which has been accompanying that feat since its opening. Fittingly Cocina Azul, the “blue kitchen” not only uses the slogan “panza llena, corazon contento” on its menu, its exterior signage invites diners to “get your chile on.”

The original Cocina Azul is located in the venerable building that for generations housed the aptly named Sunshine Market, a cornerstone of the neighborhood since it launched in 1925 until its closure some three quarters of a century later. From 2007-2009, the converted market on the southeast corner of Mountain Road and 12th Street was home to the Sunshine Cafe, a very highly regarded restaurant which retained some vestiges of the market–-a wooden door to the market’s meat locker, exposed roof trusses and other wood accents taken from the market. Those vestiges are still visible with the Cocina Azul.

It didn’t take Cocina Azul long to earn significant popular and critical acclaim. Guests quickly discerned the differentiators which single out the truly special restaurants from their competitors. Perhaps first and foremost is the service which might be best described as familial. Quite literally, Frank and Evelyn Barela, the affable owners and their staff, treat their guests as they would treat family members, exuding warmth and hospitality. Secondly, the food is prepared from time-tested and traditional family recipes bolstered by contemporary nuances that give it upscale qualities. Those recipes don’t call for dumbed-down chile. This is chile natives like me respect as much for its flavor as for its piquancy.

Step into the bright and airy cafe and your eyes might train on a menu board above the counter prefacing the kitchen. The menu board offers “self-service catering,” an interesting concept in that customers can saunter up to trays of New Mexican food favorites and load up on quart or gallon sized portions of carne adovada, red or green chile, beans, rice and chile con queso.

With the success of the Mountain Road location, it became inevitable that the Barela family would expand their restaurant enterprise. Their first attempt at expansion was on Albuquerque’s burgeoning west side in a shopping center where restaurants turn over at a rapid pace. Cocina Azul west was short lived at the location. Downtown proved no more welcoming to Cocina Azul when its fast-casual concept called Azul Burrito Co. didn’t last very long, a casualty of traffic choking problems caused by construction. Based on a heavy lunch crowd during our inaugural visit on 8 April 2016, the family’s most recent expansion venture, at the Granada Square restaurant space on Montgomery, appears poised to succeed where its predecessors did not.

Faithful readers know my enmity for misguided New Mexican restaurants which commit the mortal sin of adding cumin to chile. In Frank Barela, I found a kindred spirit. The amicable co-owner of Cocina Azul assured me you won’t find cumin anywhere near his kitchen, comparing cumin’s odoriferous qualities to smelly socks (my friend Bill Resnik would go a bit further and say “wet dog wearing smelly socks.”). Barela appreciates the purity of chile, a fruit so perfect it needs no amelioration. The chile at Cocina Azul is made from pureed whole pods, strained to a silky smoothness.

That purity is discernible in the wondrous salsa, a plastic molcajete brimming with a piquant blend of chile rojo, tomatoes, onions, garlic, oregano and cilantro. It’s an eye-opening, mouth-watering salsa with a nice bite. The salsa is served with a generous heaping of crispy white and blue corn tortilla chips sturdy enough to hold Gil-sized portions of salsa. These may be the very best restaurant chips of any New Mexican restaurant in Albuquerque. They’re lightly salted and heavy on corn flavor. A green salsa, a surprising rarity in New Mexican restaurants, is also available. It’s at least as good as the red salsa and perhaps slightly more piquant.

10 April 2016: During our inaugural visit to Cocina Azul’s Montgomery location, we experienced a couple of issues which detracted from our enjoyment of what we expected would be a very good meal. First, we ordered the “bottomless” salsa, expecting to have it replenished faithfully at least twice. Alas, no sooner had the salsa arrived at our table than our server ferried over our bowl of posole and within only a few enjoyable bites of the posole, our entrees arrived. We would much have preferred a well-paced meal with a more lengthy interval between “courses.” The kitchen’s heavy hand with salt was the restaurant’s second transgression. A carne adovada relleno plate (doesn’t that sound fabulous) was so salty we had to send it back. Other items were only slightly less salty. This has not been an issue at the Mountain Road location.

10 April 2016: During our visits to the Mountain Road location, we concluded Cocina Azul’s posole just might be the best in the city. For one thing, it looked and tasted like posole and not Southern hominy (yes, there is a difference). The posole (nixtamilized corn kernels slaked in lime water sans husk) was of a perfect consistency, swimming in a large bowl of red chile and tender chunks of pork. This was New Mexican comfort food at its finest, one of those dishes that truly can make your heart happy.

16 May 2021: One of the most wonderful things about enchiladas is their versatility. You don’t always have to have yellow corn tortillas when blue corn tortillas are available. You don’t have to stuff them with ground or shredded beef.; you can engorge them with virtually any protein or vegetable (calabasitas are a great option) you desire. Similarly, you’re free to choose the cheese and the chile (red, green or both) you want. A fried egg or two or three–that’s no problem. Cocina Azul offers several options to make your enchiladas more enchanting.

The ribeye steak enchiladas (three flat corn tortillas, marinated select ribeye steak, filled with a Cheddar and Monterey Jack blend, melted and smothered with your choice of Frank Sr.’s red or green chile) is an excellent option. The ribeye is cut into small pieces about the size into which your mom may have cut your steak. It’s a high quality ribeye with no gristle or fat and it may leave you wondering why more restaurants don’t offer ribeye for your enchiladas.  Even better (the opinion of three servers we’ve asked) is the brisket enchiladas.  Indeed, the brisket is shredded into tender tendrils of absolutely mouth-watering brisket as good as you’ll find at a great barbecue restaurant.

10 April 2016: Unlike at so many other New Mexican restaurants, Cocina Azul doesn’t limit the sides that come with your entrees to the de rigueur rice and beans. Items on the “Platos de Nuevo Mexico” section of the menu include your choice of two sides including whole beans, fideos, calabasitas, rice and more. The whole beans are an exemplar of how New Mexico’s “other” official state vegetable should be prepared. For a unique treat, ask for the fideos, an unassuming short, thin and slightly curved pasta served in a tomato sauce. Fideos have been served in Spain since the 13th century.

10 April 2016: Similar to the enchiladas, tacos aren’t offered just one way.  For example, you can have ala carte tacos constructed on soft flour tortillas and stuffed with seasoned ground beef, chopped tomatoes, fresh lettuce and a shredded Cheddar cheese blend. These tacos are a perfect repository for the restaurant’s wonderful salsa. The soft tortillas are soft and pliable with just enough thickness to hold in all the ingredients. If you’re still of the mind that tacos should be prepared in hard shells, these will make a convert out of you.

The sopaipillas will have that “corazon contento” effect on you, too. Not quite the size of a deflated football, they’re the perfect way to end a great meal. Best of all, these golden treats are served with real clover honey, not that inferior honey-flavored syrup far too many restaurants use. Clover honey is honey that has been harvested from bees that have gathered nectar mostly from clover. It’s not overly sweet, but this golden-hued ambrosia is just sweet enough for some of the very best sopaipillas in the Duke City.

10 April 2018: In her wonderful tome Sandwiches That You Will Like, my dear friend Becky Mercuri explains that Route 66 in Texas was often called the Chicken Fried Steak Highway. With her usual poetic flair, she elaborated: “As splendid and noble as barbecue and Tex-Mex are, both pale before that Great God of Beef dish, chicken-fried steak.” As regular readers of this blog know, my friend Bruce “Sr Plata” frequently worships at altars where that Great God of Beef is prepared. In the past several years, we’ve explored the highways and byways around the Duke City in search of the best chicken fried steak to be found.

Blazing our own New Mexico Chicken Fried Steak Trail, our trek took us to Cocina Azul where a reputedly excellent chicken fried steak is to be found. Available on the breakfast menu (served all day), it’s large enough to feed a small family (or one Sr Plata): two eggs prepared the way you want them, hash browns and a half-pound Angus beef steak pounded and batter dipped, fried to a golden brown and smothered with Frank Sr.’s creamy green chile chicken gravy sauce, or Frank Sr.’s regular green or red chile, served with toast, sopaipilla or tortilla. Sr Plata’s assessment: “This is a top five chicken fried steak.” It’s thicker than any other we could remember, but is still fork-tender with a crispy exterior giving way easily to its tender interior. The green chile chicken gravy sauce has a nice bite and is flecked with tendrils of chicken.

10 April 2018: As Evelyn’s Homemade Pancakes (a full stack of ﬂuffy, delectable pancakes served with butter and syrup on the side) approached our table, we caught a faint whiff of vanilla. To our minds, vanilla is wholly unnecessary and makes an already sweet dish nearly cloying. That’s too bad because the three golden orbs are light, fluffy and beautiful. Rather than vanilla, my preference would have been pancakes in which either cheese or bacon was embedded.

Cocina Azul is one of those rare restaurants which pays attention to the small details, the difference-makers understood by all businesses striving for longevity.  Cocina Azul is widely regarded one of Albuquerque’s best New Mexican restaurants and should continue being so provided it continues to create panzas llenas and corazones contentos.