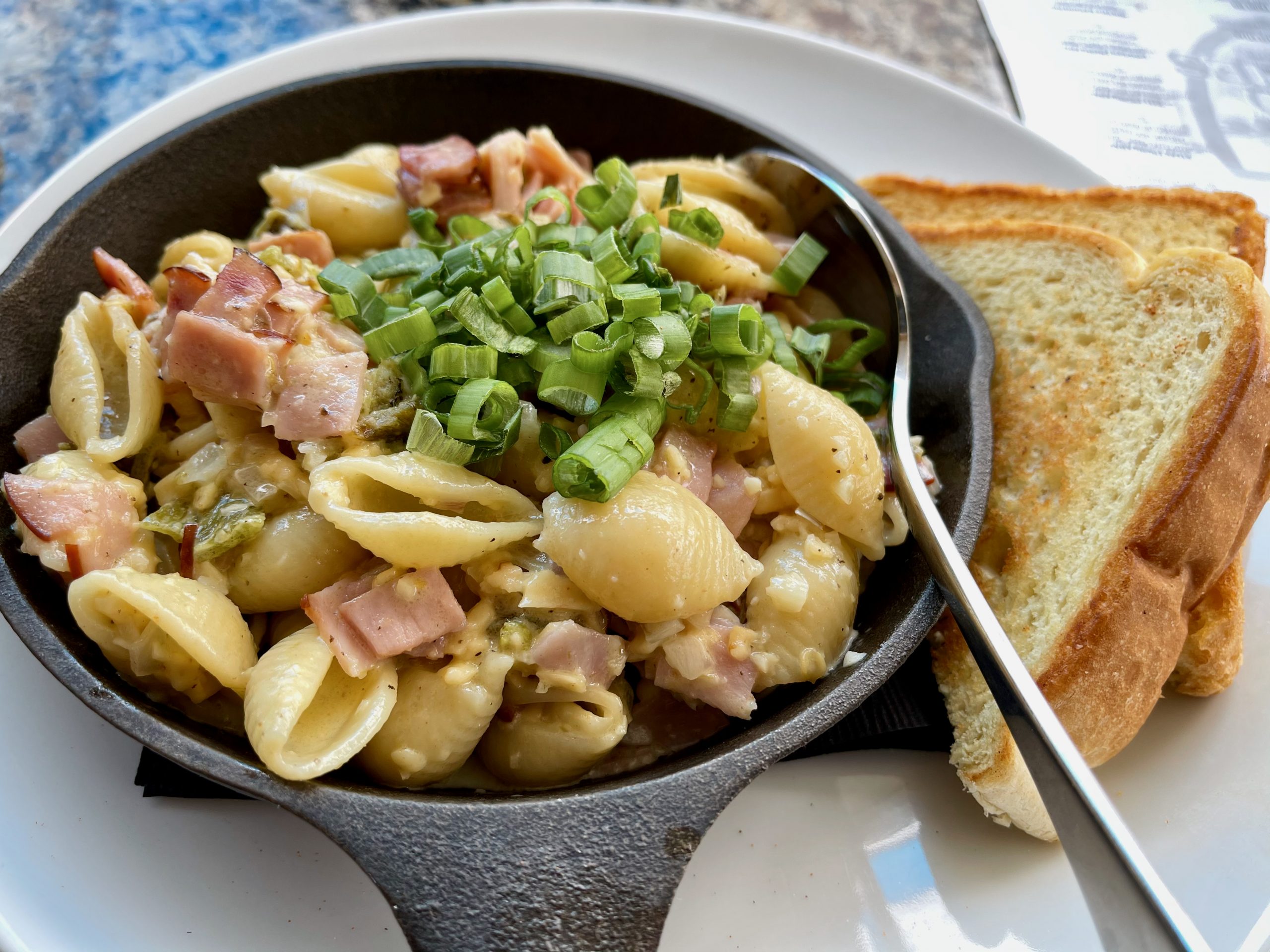 As we wended our way along meandering Rio Grande Boulevard, I commented to my Kim, “I sure miss Ichabod and Katrina.”  “Colleagues of yours at UNM?,” she asked.  “No, not colleagues,” I replied pointing to a large, verdant field, “Ichabod and Katrina were the two sandhill cranes who used to feed in those fields.”  “Oh, I get it,” she responded, “you’re talking about Ichabod and Katrina Crane from The Legend of Sleepy Hollow.”  She then asked why I’ve always had such a great admiration for Ichabod Crane, a fictional character who basically embodied all the seven deadly sins: greed, glutton, sloth, indolence, wrath, lust and envy.

“Yeah, I understand all of that,” I explained, “but Ichabod Crane was a man ahead of his time, an 18th century equivalent of a foodie.”  Washington Irving, described him as “a huge feeder, and though lank, had the dilating powers of an anaconda.”  Isn’t that the kind of super power we’d all like to have?  He had a voracious appetite but somehow managed to remain thin.  When he saw animals lounging in the fields, his mouth watered, described masterfully by Irving: “In his devouring mind’s eye, he pictured to himself every roasting-pig running about with a pudding in his belly, and an apple in his mouth; the pigeons were snugly put to bed in a comfortable pie, and tucked in with a coverlet of crust; the geese were swimming in their own gravy; and the ducks pairing cozily in dishes, like snug married couples, with a decent competency of onion sauce.”

Though normally a very scenic drive, the absence of the funny-looking yet magnificent angular cranes that winter along the Rio Grande made our drive somehow less satisfying.  As with several migratory birds who spend time in the Land of Enchantment, cranes mate for life, often starting their lifelong, love-long relationship as childhood sweethearts.  There’s no way I can really know if the pair I often see feeding from about November through April are indeed Ichabod and Katrina, but I like to think he’s taking her on a romantic dinner date.  Unlike his human namesake, he’s more apt to share his verdured repast.

Not by coincidence, the terminus of our leisurely Sunday peregrination was Two Cranes Bistro & Brew, a restaurant, taproom, juicery and coffee roastery on Rio Grande just north of the entrance to Old Town.   It’s unlikely Two Cranes was named for my favorite pair of “snowbirds,” but it’s gratifying to see sandhill cranes celebrated other than during the festival of the cranes at the Bosque del Apache.  Two Cranes faces the D. H. Lescombes Winery & Bistro (formerly the St. Clair Winery & Bistro) in a spot previously occupied by Starbucks.  Unlike its neighbor, Two Cranes is open for breakfast as well as lunch and dinner.

15 May 2021: The Two Cranes website describes the restaurant and menu as “inspired by local surroundings. With menu items comprised of as many locally sourced items as possible, we bring freshness along with our excitement. The Two Cranes team uses the plate as an artistic medium.”  While the literary Ichabod would probably have been more excited had the menu described a profuse smorgasbord, we quickly espied a number of intriguing options.  Chief among them were the relleno rolls (chorizo and Cheddar stuffed poblanos deep-fried in an egg roll shell. Served with chipotle ranch.)

Lest you remind me of my recent whining that “chimichangas are almost always deep-fried to the point that the tortilla resembles an egg roll wrapper,” these relleno rolls actually use an egg roll wrapper by design…and it works at least insofar as the texture and flavor of the egg roll wrapper.  The filling wasn’t nearly as successful.  Treasure-seekers in pursuit of Forrest Fenn’s bounty would have found it easier to locate his treasure than to discern any chorizo in the relleno rolls.  Worse, the Cheddar had the flavor and consistency of nacho cheese at a ballpark.    The chipotle ranch works well, offering a creamy balm you sometimes crave when enjoying chile that brings the heat.

2 June 2019: Taco rolls (seasoned ground beef, cheese, and pico rolled into a crispy egg roll served with salsa) also grace the menu, but our server confirmed the ground beef is “seasoned” with cumin, that accursed despoiler of chile.  Scouring past the starters section of the menu and you’ll find two intriguing salad options.  The nascent summer weather inspired us to order the spinach & berry salad (spinach, pinon, pistachio, candied walnut, with seasonal berries and mandarin orange with a housemade citrus vinegar).  The nutty triumvirate of piñon, pistachio and walnut is a nice foil for the berries and juicy orange slices while the citrus vinegar coalesces complementary and contrasting flavors in harmony.

2 June 2019: There are seven sandwiches and a green chile cheeseburger on the sandwiches section of the menu.  My Kim couldn’t decide which to order so she basically closed her eyes and pointed, her finger landing on the Italian Gunslinger (roasted porchetta (spiced pork belly and pork loin), Emmantel Swiss, and caramelized onion on marble rye.  Visions of the “spaghetti westerns” of yore crossed my mind.  Unlike the quintessential cowboy of Sergio Leone’s cinematic creations, this Italian Gunslinger isn’t especially assertive.  Its ingredients work together nicely, but don’t have the punch the sandwich’s name might imply.  Of course when I pointed this out, my Kim blurted out that this sandwich was “Joe Black” not Clint Eastwood or Chuck Norris.  When I demonstrated my masculine ignorance, she chided me, “don’t worry, female readers will get it.”

2 June 2019: In a rather clever turn of phrase, Two Cranes riffs on the New Mexico state nickname with the name of one of two items on the New Mexican section of the menu.  Then, of course, some might tell you that our enchiladas are so delicious, the state sobriquet could well be Land of Enchiladas (layered corn tortillas filled with braised chicken or seasoned ground beef, smothered in NM chile, cheddar and jack cheese with pinto beans and papitas).   I’ll remember these enchiladas for almost being great.  The green chile was outstanding with a nice piquancy and roasted flavor, however, there just wasn’t enough of it.  As a result, the Land of Enchiladas plate was rather desiccated, much like our great state on La Niña years.  Next time, I’ll ask for as much chile as our server can carry.

15 May 2021: in May, 2020, Nation’s Restaurant News, a respected trade publication noted that “elotes are found on only 2-percent of menus in American restaurants, but its popularity has increased by more than 110% over the past four years.”  That places elotes in the “inception” stage of the menu adoption cycle (Inception > Adoption > Proliferation > Ubiquity).  Inception is where a food trend begins–usually in fine-dining restaurants and ethnic independents.  According to Datassential, only 22-percent of the population across the fruited plain even knows what elotes are and only 14-percent of us have ever tried them.  Not surprisingly, the highest levels of awareness are among Hispanic, Gen-Z and Millennial diners.

15 May 2021: New Mexico certainly has a higher level of awareness than many other states though we’ve rarely encountered elotes in fine-dining restaurant menus.  Mostly we’ve found them at spectacular taquerias such as El Cotorro and amazing food trucks such as Elotes Del Rancho.  Whenever we see elotes on the menu we jump at the opportunity to enjoy sweet, savory, crunch and creamy flavor and texture sensations in every bite.  Elotes are far more than corn-on-the-cob.  They’re the most popular of all Mexican street foods, especially when fresh corn is at its peak and they’re available hot off the grill.

Being served cold elotes is more than a turn-off; it’s a mortal sin!  That’s what we were served at Two Cranes.  The menu promised “roasted corn-on-the-cob topped with mayo, Cojita cheese, cilantro, lime and chile“–pretty much the way you’d find elotes in a Mexico City food cart.  Our gracious waitress apologized profusely and ferried away the cold elotes, returning quickly with an elote in all its grandeur and splendor.  More than a “roasted” flavor, we got “reheated,” but it was far better than having it cold.  The harmonious interplay of ingredients in perfect proportion worked well.

15 May 2021: We attributed the number of “oddities” with our meal to the fact that our visit transpired on one of the first weekends in which the dining public was able to enjoy restaurant outages at “reasonable” capacity.  The third peculiarity was with my entree, the Ole Boy Blue (blue cheese, caramelized onions, bacon) with green chile.  Similar offerings are usually a canvas for showcasing the three named ingredients with of bounteous blue cheese, a rasher or two of bacon and a garden of grilled onions.  Two Cranes’ version was generous with its blue cheese and green chile, but rather parsimonious with the grilled onions.  Even more perplexing were the sliced red onions, pickles and tomatoes beneath the beef.  Rather than fresh, sliced onions, more grilled onions would have been greatly appreciated.  The burger was quite good; it might have been great with only the named ingredients in expected quantities.

15 May 2021:  The most successful item during our second visit was the Truffle Mac & Cheese (smoked Gouda, truffle oil, ham and green chile).  Our server warned us that the green chile was “really hot.”  Having heard that before (many times), we were skeptical, but my Kim nonetheless asked for only a half portion.  It turned out our server spoke the truth.  Even this fire-eating native New Mexican offered a respectful salute to this green chile.  Tempering that chile just a bit is smoked Gouda, one of the very best cheeses for mac and cheese.  The truffle oil (a synthetic compound, by the way) offered its characteristic earthy notes.

Few restaurants offer such a terrific venue for al fresco dining as this Old Town area restaurant.   It would have been very interesting to share a meal here with renaissance man Ichabod Crane, a foodie for the ages.