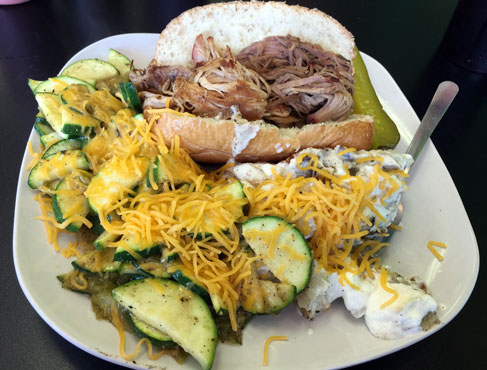 If perspiration is (as the proverbial “they” have declared) the mother of invention, Mickey and Clinton Coker may just be two of the most glistening guys in the Duke City. Since 2004, the Cokers have “reinvented” their restaurant four times. If you’re thinking, they’re just try, try, trying again until they get it right, you couldn’t be more wrong. Mickey Coker, the entrepreneur behind the four make-overs, started with a culinary concept that was so wildly successful, it prompted almost immediate growth. His second effort, a brick-and-mortar operation, also achieved significant acclaim. Some might have considered the third Coker transition strictly a sideline…until it started garnering one award after the other. The fourth step in the evolution of the Sandia Grill may be the most revolutionary of all.

For Mickey Coker, the route to entrepreneur was inauspicious. He got his start selling New Mexican food at a gas station-convenience store. Yes, the very notion of a gas station-convenience store food conjures images of salty, cylindrically shaped dry meat snacks with the texture of sawdust and air-filled bags of Cool Ranch Doritos. Now mention New Mexican food and gas station in the same sentence and the likely image would make all the sophomoric six-year-olds among us giggle, the notion of “gas” not having anything to do with petroleum. Despite these stereotypes, Coker had the confidence in his New Mexico food products to launch his business in 2004, ensconced within the confines of a convenience store-gas station in the Winner’s Circle gas station at Harper and Barstow. A second location, on Montgomery just east of I-25, followed shortly thereafter.

From its onset, the Sandia Chile Grill’s made-to-order burrito concept elevated gas station dining from a fast food grab-and-gobble experience to a uniquely sublime New Mexico dining extravaganza, albeit one without on-the-premises seating. The aroma of tortillas on the grill quickly had patrons making a bee-line to the little grill that could at the back of the convenience store portion of the gas station. While relatively little space is required to operate what is essentially a to-go diner, Coker saw his business grow to the extent–as many as 4,000 meals in a busy month–that a real restaurant storefront was in order. He launched the Sandia Chile Grill restaurant at the Del Norte Shopping Center, essentially moving from the Winner’s Circle gas station not that far away.

A native New Mexican (born in Belen), Coker saw two obvious reasons for the name Sandia Chile Grill, the first being Sandia chile which grows in the Mesilla Valley. Sandia chile ranges from four to six-inches long and dries to a deep burgundy color. It’s one of the most delicious of all red chiles and is served at such fabled New Mexican food treasures as Mary & Tito’s. Sandia is also the name of the mountain range backdropping the city of Albuquerque.

At the restaurant, the staff had the room to operate and customers had comfortable seating in which to enjoy New Mexican food favorites. Though much of the restaurant’s business remained carry-out, it was nice to have had an alternative when you wanted it. As at the service station, burritos dominated the menu: breakfast burritos, steak burritos, steak and chicken burritos, chicken burritos, pork burritos and even veggie burritos. Some burritos were named for professional wrestlers (Ultimate Warrior, Undertaker, Junkyard Dog, Mankind and the Macho Man). There were also burritos named for Mexican western characters: El Matidor (sic), Bandito, Caballero and El Jeffe. The menu also included stuffed sopaipillas, enchiladas, tamales, rellenos and tacos–the New Mexican food essentials which couldn’t be prepared at the gas station sites.

In 2009, the facility was approved by the Food and Drug Administration (FDA) to can all its chiles and sauces for nationwide distribution. In 2012, the Cokers opened a microbrewery on the premises–and an award-winning brewery at that. Within months after launching, they entered seven items in a New Mexico State Fair competition, earning five medals including a “best of show” in the professional division. The blue and red-ribbons are on display in the restaurant. The menu also began featuring several gluten-free items (nachos, green chile chicken stew, chicken quesadillas, chicken enchiladas, steak tacos and more).

The Cokers determined that an even more natural accompaniment to award-winning adult libations than New Mexican food is barbecue. Yes, barbecue! Though their New Mexican dishes were beloved by the masses who frequented the Sandia Chile Grill, the Cokers are not ones to stay still. They transitioned to a smokehouse concept in March, 2014, positioning a smoker near the Wyoming entrance to the shopping center. Aficionados of Sandia’s New Mexican food weren’t left in the cold, however. The new menu also includes several popular New Mexican food favorites (burritos, enchiladas, stuffed sopaipillas, quesadillas, huevos rancheros and a green chile chicken bowl ) prepared with smoked meats instead of the more conventional meats used on New Mexican food.

Because the concept of transitioning from a New Mexican restaurant to a smokehouse may seem radical, you’re probably wondering if this is a haphazardly undertaken venture. In truth, the Cokers have had a smoker for more than a decade. That’s plenty of time to master low-and-slow smoke manipulation on meats. Brimming with confidence from the great reception their barbecue has received, the Cokers have plans for a larger smoker with a much greater capacity. The barbecue menu is replete with the essentials: pulled pork, smoked chicken, brisket, St. Louis ribs and street tacos. You can purchase them in increments ranging from a quarter-pound through ten pounds. You can also partake of a sandwich meal with two sides for a ridiculously low price. Three sauces–a tangy sauce similar to what you’d find in the Carolinas, a spicy sauce redolent with Habanero and a sweet sauce–are available though because it’s good barbecue, they’re wholly unnecessary.

29 June 2015: The pulled pork sandwich features a hoagie type bun brimming with tender tendrils of pulled pork. It’s good to go as is though you might want to experiment with the three sauces to see if one suits your taste. The spicy Habanero-based sauce provides a “slow burn,” a deceptive “sneak up on you” burn that may water your eyes if you apply too much of the sauce. If you’re from New Mexico, you can handle it. Make one of the two sides the calabasitas. These aren’t your run-of-the-mill calabasitas. They’re prepared al dente and paired with a green chile as incendiary as the Habanero sauce. Another excellent side is the twice-baked potatoes which have a smooth, creamy texture and are punctuated with sour cream.

3 July 2015: The pairing of New Mexican food and barbecue is a match made in New Mexico and that’s about as close to heaven as there is on Earth. One of the most surprisingly natural couplings is smoked brisket with “Christmas” style enchiladas, available in quantities of one, two or three. Atop tortillas redolent with corn are heaping helpings of smoked brisket, shredded Cheddar, lettuce and the red and green chile with which Duke City diners fell in love when the Ultimate Warrior was on the menu. The chile has a pleasant piquancy that doesn’t obfuscate the smokiness of the brisket. Brisket enchiladas are a surprisingly good way to enjoy the best of two flavor combinations.

16 August 2015: In the Duke City area, barbecue restaurants tend to favor baby back ribs over St. Louis ribs even though the St. Louis ribs are more substantial and meaty. So, what’s the difference? St. Louis ribs are actually spareribs that have been trimmed down, removing what is commonly known as the rib tips. St. Louis ribs come from the belly section of the pig, near where the sacrosanct bacon can be found. As their name suggests baby back ribs come from the back side of the pig, near where the loin is. The St. Louis ribs at the Sandia Chile Grill aren’t quite as thick, meaty and substantial as other ribs of the kind we’ve had, but the meat they do have includes the caramelized “bark” barbecue aficionados love. This is meaty magnificence at its best.

Mick Coker and his son Clinton are immensely proud of their New Mexican heritage and like most proud New Mexicans, know one of the day’s most difficult decisions is whether to have red or green chile…or both. They help make that decision easier for their guests by offering excellent New Mexican cuisine showcasing both. They also showcase some of the best adult libations and barbecue in town.