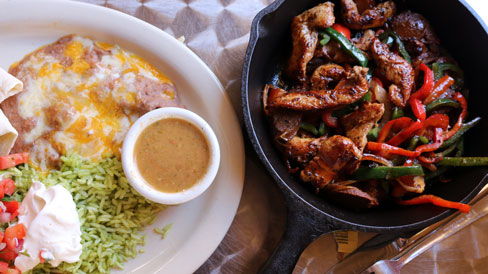 National Geographic Traveler once described Santa Fe as “a hypercultural hybrid–equal parts Wild West and New Age, Native American and Hispanic, old money and old hippie”…a city “used to mixing things up and still creating an oddly seamless whole.” It truly is the City Different, a city with an identity, substance and style all its own. Is it any wonder it has earned acclaim as one of the most popular travel destinations in the world?

Yet, to many people, Santa Fe is as much an escape as it is a destination. It is an adobe colored Mecca that preternaturally calls seekers to a spiritual and creative fulfillment they just don’t find elsewhere. Santa Fe draws them with an amalgam of spiritual tranquility, piñon-perfumed air and its accepting, non-judgmental culture. It holds them captive with its beauty and its cuisine. One of the defining elements of contemporary “Santa Fe style” has been the howling coyote, an art phenomenon originated by woodcarver Alonzo Jimenez a couple of decades ago.

While the coyote is prevalent in contemporary Native American mythology and generally represents a cunning, treacherous scourge, to New Mexico artisans he has been a blessing, displayed on every conceivable medium. The howling coyote became so omnipresent that it became synonymous with Santa Fe style. In the culinary arts, Santa Fe style is most often associated with the Coyote Cafe whose logo is surprisingly not a howling coyote, but a flute-playing (ala Kokopelli) coyote about town with an unusually long, shaggy tail.

The Coyote Cafe, founded in 1987 and going strong more than two decades later, is considered by cognoscenti to have created the template for modern Southwestern cuisine. At the Coyote Cafe–under the direction of the “High Priest of Southwestern Cuisine” Mark Miller–Southwestern cuisine evolved and reinvented itself time and again, honoring its historical roots while introducing new elements and culinary techniques that both reflect and refine tradition.

The most recent reinvention of the Coyote Cafe is in the form of a new ownership group that includes Eric Distefano, one of the best chefs in the entire southwest. Distefano has been at the helm at Geronimo for many years and from all indications, is restoring the Coyote Cafe back to its halcyon days when it was widely considered one of Santa Fe’s premier dining destinations.

My favorite Coyote Cafe restaurant family member has long been the Rooftop Cantina where seasonal open-air dining between April and late October is so quintessentially Santa Fe. The atmosphere is casual and the views of Santa Fe’s bustling downtown are ever so cosmopolitan. Thematically, the Rooftop Cantina has the look and feel of Old Mexico. As much as we enjoyed the Cantina, we somehow let eight years elapse in between visits and when we returned in August, 2015, we discovered a different Coyote Rooftop Cantina. While the ambiance still resonates with fun and frolic, many of our favorite dishes had either evolved or were no longer on the menu.

When pressed, I would admit to the Rooftop Cantina’s fire-roasted salsa as being my very favorite in the Land of Enchantment. While other salsas were more piquant, the Cantina’s salsa and its subtle citrus influence and tangy sweetness had addictive, capsaicin endowed properties that made it unrivaled for pleasure-inducement. We purchased Miller’s The Great Salsa Book so we could duplicate this salsa during the Cantina’s off-season when we couldn’t get it.

15 August 2015: Alas, making it at home is henceforth the only way we’re going to be enjoying this wondrous salsa. While a fire-roasted salsa is still on the Cantina’s menu, it isn’t the fire-roasted salsa we loved so deeply. It’s now redolent with cumin. We gleaned some consolation from the fact that the menu now offers a trio of salsas: the aforementioned fire-roasted salsa; a creamy avocado, tomatillo and lime salsa and a pico de gallo. The avocado-tomatillo-lime salsa is superb, a creamy amalgam of lively flavors that go so well together. Similarly, the pico de gallo (rooster’s beak) melds fresh ingredients into a pleasantly piquant, freshly flavorful delight.

15 August 2015: The Cantina has long been the type of restaurant in which diners feel comfortable ordering two or six starters instead of a single entree. It’s not necessarily a cost-effective proposition, but the appetizers tend to be very good and are usually large enough to share (not that you’d want to). The starters menu includes a trio of seafood starters including a black sesame honey white shrimp tempura served with two sauces, an incendiary spicy atomic horseradish sauce and a pineapple sweet and sour sauce. Unlike some tempura dishes which are so heavily breaded that you barely discern and taste the sheathed item, this tempura is delightfully light, allowing the shrimp to shine. The shrimp is so fresh and delicious, it renders the sauces almost unnecessary though both enliven the five shrimp.

15 August 2015: Shrimp are also available on the “fiery skillet” entrée which by any name would still be fajitas. Landlubbers can opt instead for chicken and chorizo served with Alicia’s tortillas, fresh peppers, Mexican crema, pico de gallo and a fresh Ranchero sauce with refried beans and green rice on the side. As fajitas go, these are quite good. My Kim especially appreciated that the green and red peppers are sliced into thin strips and grilled to an optimum level, neither al dente nor mushy. The flavors of the chicken and chorizo go very well together. My favorite item on this entrée were the refried beans topped with melted yellow and white Cheddar.

15 August 2015: If a green chile cheeseburger includes chile, but it isn’t New Mexico green chile grown in the Land of Enchantment, can it still be called a green chile cheeseburger? Apparently not because the Cantina’s sole burger offering features not the pride of New Mexico, but pickled Fresno chile which is grown throughout California. It’s called “The Cantina Gold Canyon Beef Burger” and it’s an “everything but the kitchen sink” burger. In addition to the pickled Fresno chile (in strips), this behemoth includes sharp Cheddar cheese, sliced smoked ham, crispy fried Vidalia onion, greens, tomato and cilantro mayonnaise and pickles with boardwalk fries and Habanero ketchup on the side. To take this burger to another level, you’ve got to smear the Habanero ketchup on heavily. It’s perhaps the tastiest element of a burger replete with ingredients.

15 August 2015:Ice cream used to be my Kim’s fallback dessert, the one to which she would resort if none of the other post-prandial treats enticed her. Over the years she’s happened upon so many excellent ice cream flavors that ice cream has now become her first choice. The Cantina’s ice cream trio validated her stance. A generous bowlful of three creamy, delicious, texturally delightful ice creams—cognac ice cream, canela chocolate ice cream and vanilla—proved swoon-worthy and satisfying to the greatest extent of the word. Only half-gallon sized portions could have made this triumvirate better for her.

15 August 2015: My preferred desserts lean toward strong flavor profiles, not desserts with cloying tendencies. It’s one of the rare disagreements my Kim and I have. For me, the stronger and darker the chocolate the greater the appeal; for her, it’s milk chocolate or it’s too strong. She didn’t like the Cantina’s Banana Chocolate tart, a semi-sweet chocolate tart topped with caramelized onions and encircled by a tangy citrusy swathe. There’s a lot going on with this dessert, highlighted by the strong chocolate.

15 August 2015: On the adobe wall just before the final four steps leading to the Cantina is a metal sculpture depicting coyotes frolicking boisterously at a Cantina. It’s somewhat reminiscent to a fight scene on a Western movie. One coyote is swinging from a chandelier, there’s a comely coquette coyote on the bar and two members of the Canis Latrans family are ready to come to blows. While the restaurant is never quite this animated, it does radiate fun and is one of the very most fun spots in Santa Fe.

Coyote’s Rooftop Grill is a bit on the pricy side even if you don’t order adult beverages, but sometimes fun times do come at a cost.